Why is mortality higher in men?

There is a male/female disparity in mortality due to COVID- 19: men are at greater risk than women of developing a serious form of the illness and dying. They account for about 60% of deaths: while the scientific community agrees on this figure, there is less agreement concerning the reasons why. Researchers differ in their opinions.

A study by T. Takahashi and his collaborators (at Yale University, New Haven, USA) suggested that this difference in mortality rates derives from a contrast in the way male and female immune systems operate. However, a team led by H. Shattuck-Heidorn at the University of Southern Maine, Portland, USA has cast doubts on this theory and proposed another hypothesis.

Takahashi and his collaborators analysed the differences in the immune systems of men and women in patients suffering from a moderate form of COVID-19. The researchers looked at the SARS-CoV-2 viral load, the antibody response to the virus and other immune markers such as cytokines (small proteins that enable communication between different elements within the immune system). The study investigated 98 patients hospitalised between the 18th of March and the 9th of May 2020. The team firstly showed that there was no significant difference in viral load between men and the women patients, whether in nasopharyngeal swabs (from 14 men and 14 women) or saliva samples (from 9 men and 12 women). Similarly, there was no difference in levels of antibodies in response to SARS-CoV-2. 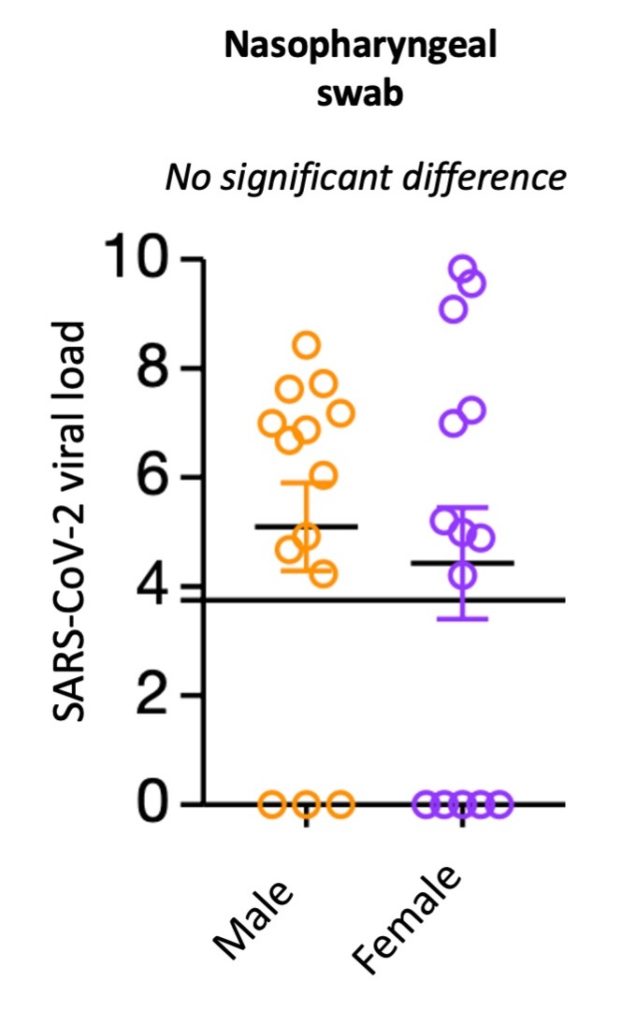 Other scientists, including H. Shattuck-Heidorn and his collaborators, criticised the methodology and the conclusions of this study. They pointed out several limitations. The first was that the cohort of individuals was too small for the different analyses. In the T lymphocyte study, for example, the analysis involved only 6 men and 6 women. It would therefore appear difficult to reach definitive conclusions with such a small sample. In addition, discrepancies appeared in the calculations. Above all, the research was not repeated often enough for it to be verified. It may be that the differences between men and women with regard to immune system markers are artificial.

For these researchers, the principal explanations of the differences between men and women with regard to COVID-19 mortality could lie in social factors, such as the willingness to wear masks. This hypothesis may be supported by the fact that the size of differences in male-female mortality rates varies according to geographical location.

The T. Takahashi team responded to these various criticisms and to the questioning of their conclusions. T. Takahashi began by affirming that other studies that appeared later than his contained similar conclusions. Several studies have shown different male-female immune responses following infection, some using animal models where social factors do not play a part. He admitted that the number of individuals involved in his study was limited but insisted that his work should provide the basis for other investigations. He underlined that biological differences between men and women and social factors are closely linked and are not incompatible. He concluded by saying that his study was only one piece in a puzzle that will undoubtedly turn out to be multi-factorial.

In conclusion, the difference in mortality rates between men and women is still not well understood, even if partial answers are beginning to be found. T. Takahashi and his collaborators carried out an initial study suggesting that differences in immune responses could give a clue. This hypothesis needs to be verified by other supplementary studies. Other scientists such as H. Shattuck-Heidorn doubt the veracity of this study and base their hypothesis on social factors. The question is still being debated in the scientific community and other answers may well come to light in the coming months. 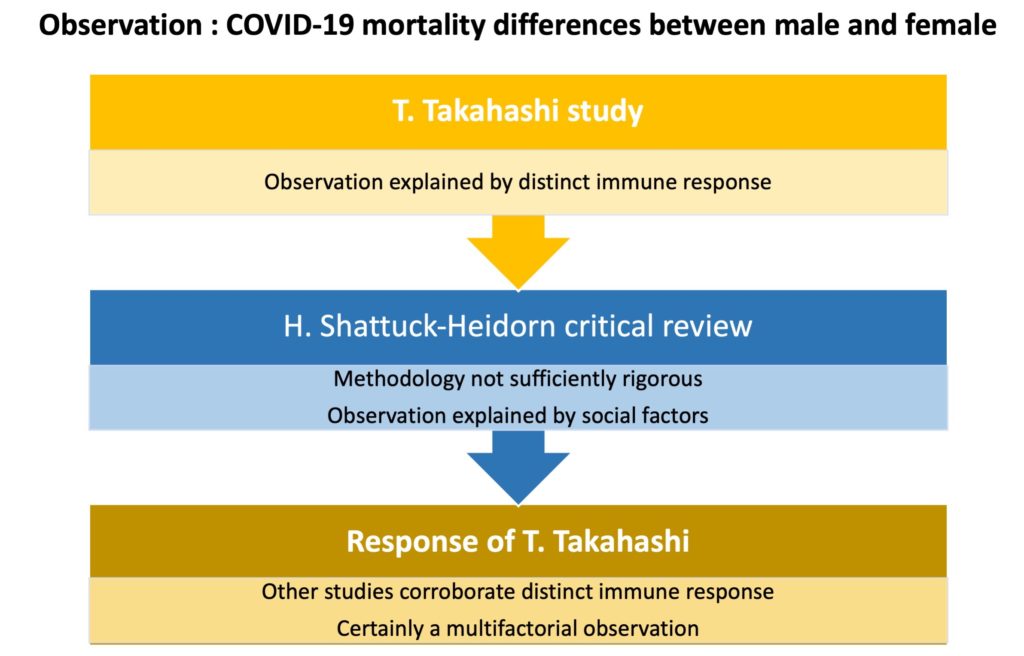 Heather Shattuck-Heidorn and coll. A finding of sex similarities rather than differences in COVID-19 outcomes. Nature, Vol : 597, 23 September 2021.