The COVID-19 pandemic has refuelled the debate on health financing, which has been, and continues to be, very expensive. Governments have had to introduce public health measures such as the wearing of masks, lockdowns, diagnostic testing, contact tracing, various drug therapies, and vaccination. The economic global recession, with an estimated 3,3% worldwide slump in 2020, has added to these costs. Developed countries have been able to finance COVID-19-linked expenses using  their economic reserves, the reallocation of resources, and borrowing. Developing nations have also had recourse to loans. The International Monetary Fund (IMF) estimates that worldwide government debt increased by 20 trillion dollars between September 2019 and September 2020. Some of this budget helped underpin economies. But how much was spent solely on health? And within this envelope, how much was international aid to developing countries for COVID-19? Researchers from the Global Burden of Disease 2020 Health Financing Collaborator Network estimated the costs of health expenditure in 2019, calculated international aid for COVID-19 in 2020, and estimated future expenditure.

The researchers estimated health expenditure for some 204 countries and territories using WHO (World Health Organisation) data. They also estimated future expenditure up to 2050. The total calculation was that 8,8 trillion dollars had been spent on health in 2019, a total of $1 132 per person.

Obviously, large disparities exist between countries. For developed countries, the average expenditure per person was $5 700 , and even reached $11 000  in the United States. This contrasts with lower expenditure in the poorest countries. These were classified into 3 groups :

Between 1995 and 2019, taking inflation into account, health expenditure increased in 182 of these 204 countries. Here, expenditure will probably continue to increase as the years pass. The researchers calculated that the total will be nearly 10 trillion dollars in 2030, and more than 14 trillion in 2050. International aid for health has increased between 2019 and 2020, mainly because of the pandemic (55 billion dollars in 2020, 14 billion more than in 2019). Sub-Saharan African countries are amongst those having received the most aid. Surprisingly, South America received only 7,7% of international aid, whereas it had accounted for more than 34% of worldwide COVID-19 deaths. Compared to total expenditure on health, international aid to fight against COVID-19 in 2020 was only a very small part of total expenditure (0,1%).

In conclusion, the health crisis has highlighted and worsened inequalities regarding access to heath care. In 2019, countries spent from $7 per person in Somalia to over $11,000 in the United States. International aid increased in 2020 as compared to 2019. Forecasts carried out by the researchers seem to indicate that these inequalities will continue into the years to come. It is therefore important that international aid allows for investment so as to best prepare for future pandemics. 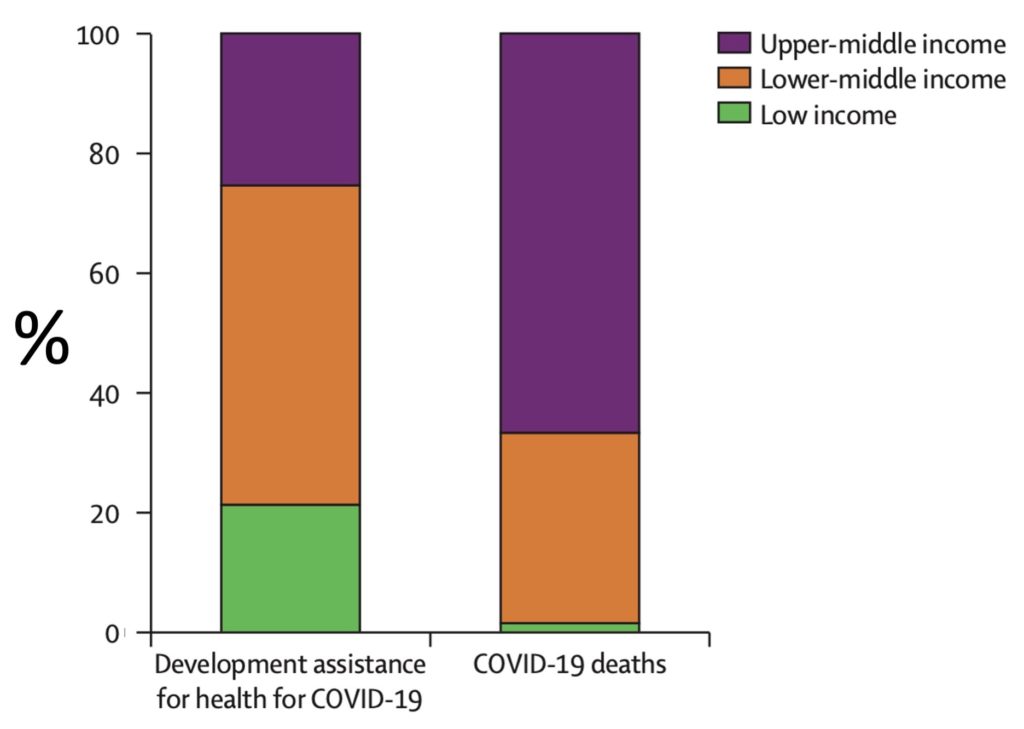 Global Burden of Disease 2020 Health Financing Collaborator Network. Tracking development assistance for health and for COVID-19: a review of development assistance, government, out-of-pocket, and other private spending on health for 204 countries and territories, 1990–2050. The Lancet, 22 september 2021.