Who was responsible for the spreading of COVID-19 in 2020?

Transmission of SARS-CoV-2 occurs through close personal contact. After the first wave of COVID-19, social distancing measures and repeated lockdowns changed interaction behaviour in people and resulted in reductions in mortality and incidence rates. However, since June 2020, there has been a resurgence in cases in the United States and Europe. Some demographic studies suggest that these increases are mainly due to infection being spread by young adults (between 20-29 years of age). However, geographical disparities in terms of health care structures, travel, incidence, and mortality levels or other “non-pharmaceutical” factors (closures, lockdowns, vaccination) may call these conclusions into question. It is therefore necessary to verify these results so as to optimise the use of precautionary measures and to control the pandemic more effectively.

Researchers in the UK (at Imperial College, London) have attempted to identify those age groups primarily responsible for increased rates of the epidemic in the United States in 2020. To do this, the travel patterns of more than 10 million people were modelled from mobile phone geolocalisation data, using Pilgrim (Foursquare) algorithms. The data was then sorted according to age. In order to correct inaccuracies due to, for example, changes in ownership of mobile phones, the results were cross-referenced with those of another mobile provider, Emodo. The model was then adapted to public COVID-19 mortality data over 38 states and cities. In people younger than 20, less travel data was available (fewer mobile phones, etc.) and the most frequent contacts occurred during the week at school rather than at weekends. For this group, contact monitoring data from two independent studies  (in China and England) were integrated.

From April to October 2020, the virus’ reproductive number R0 was the highest (from 1,24 to 1,44) in 20-49 year olds. This section of the population has more mobility, has the highest level of same-group contacts and develops more COVID-19 than younger people. Their contribution to the spread of the disease is 10 times higher than those younger than 20, 2,5 times higher than those aged between 50-64, and 10 times higher than those older than 65. While the contribution of 35-49 year olds is constant countrywide, that of 20-34 years old is higher in southern, western, and south-western states. From August to October 2020, schools re-opened in the majority of states, raising the question of the impact of this act on rises in epidemic levels. But the model shows that this impact was negligible since levels remained stable during this period. Youngsters aged from 0-9 accounted for 5% of infections, and 10-19 years old for 10%, figures that are completely different to those in flu epidemics. Since young people can easily pass on the virus to people of 20-49 years old, the model predicts that the reopening was indirectly responsible for an increase of 26% in transmission levels.

Some studies suggest however that reported cases of deaths from COVID-19 could be under-estimated, which could strongly bias the study. Moreover, asymptomatic cases are the majority among young people.

Although this model has certain limits, it nevertheless shows that the epidemic’s increase in the States in 2020, as well as deaths due to senior visiting, was mainly caused by 20-49 year olds (72,2% of infections), principally due to changes in their behaviour and in their mobility. The authors recommend that in regions where the virus has not yet fully taken hold, this group (20-49 year olds) should be vaccinated as a priority in order to rein in transmission. 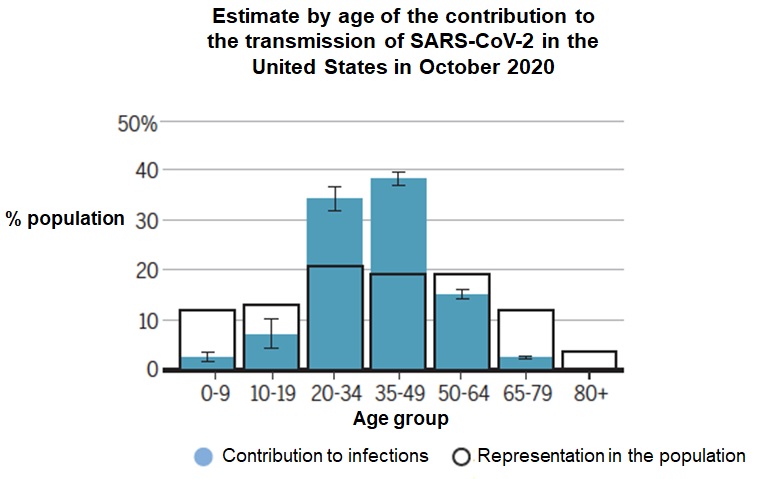