The pandemic in Africa

The first case of COVID-19 on the African continent was declared in Egypt on the 14th of February 2020. Although the majority of African countries have been affected, the first wave of the pandemic seemed to spread less quickly through the continent than in the rest of the world. How can this be explained? The continent is characterized by enormous variations in its different countries concerning demography, economy, culture, politics and health care. These different elements affect the response of each country to the outbreak. Researchers at the African Centre for Disease Control and Prevention in Addis Ababa, Ethiopia, have analyzed the available epidemiological data to try and better understand the spread of the illness through the continent.

These researchers gathered data from the 55 member states of the African Union, between the 14th of February and the 31st of December 2020: weekly and total infection rates, mortality rates, the number of diagnostic tests and the public health measures put into place. By the 31st of December 2020 the 55 countries of the African Union had suffered a total of 3.4% of worldwide cases. 56% of African Union countries had reported their first cases between the 8th and the 21st of March 2020, and nine countries had had more than 80% of the total cases of COVID-19 in Africa, with South Africa in first position.

As regards the number of deaths linked to COVID-19, 65 602 had been declared, that is, 3,6% of all deaths worldwide. 75% of these deaths had taken place in five countries: South Africa, Egypt, Morocco, Tunisia and Algeria. There were large disparities between the 5 regions of the continent: for example, the south of Africa had 43% of total cases with 46% of deaths, whereas central Africa had only 3% of cases and 2% of deaths. 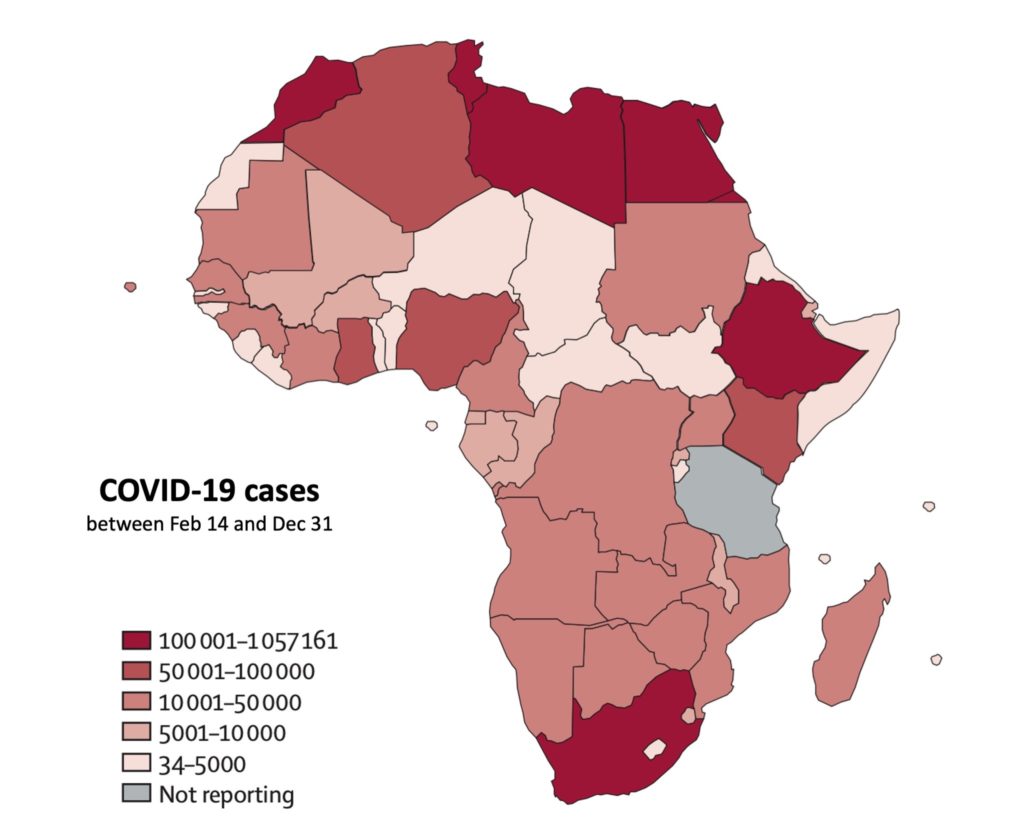 The accessibility of diagnostic tests was also evaluated. Only three of the African Union countries had tests available at the end of February 2020. However, by the end of March 2020, the majority of countries were equipped for PCR testing. In total, more than 26 million tests were carried out, of which 60% took place in only 6 countries: South Africa, Morocco, Kenya, Egypt and Nigeria. However, testing capacities decreased gradually as the epidemic advanced. Some countries had difficulties maintaining the necessary levels to meet demand during different peaks of the epidemic. The use of rapid antigen testing could therefore be a good alternative in the future.

Overall levels of recovery were at about 80% across African countries. But there were disparities: six countries (the Central African Republic, Cape Verde, the Ivory Coast, Djibouti, Gabon and Ghana) have had recovery levels above 98%.

As regards public health measures, by the 15th of April 2020, 48 countries (96%) had put at least 5 important measures in place, such as checks on international travel, closure of schools or restrictions on public assembly. However, relaxation in the implementation of these measures did occur: by the 31st of December 2020, the number of countries with at least 5 precautionary heath measures in place had fallen to 36 (72%).

Analyzing the overall data, the researchers observed that the peak of the first wave occurred in mid-July 2020, and that by the end of December 2020, the continent had not yet reached the peak of the second wave.

In comparison with other continents, it seems that the COVID-19 pandemic did not reach the same levels of intensity in Africa in 2020, except in certain countries such as Cape Verde, South Africa, Libya and Morocco. This epidemiological analysis, regional and country-by-country, should help to better identify the measures needed in terms of, for example, screening, health equipment and preventative action. Africa has still not experienced a third wave; this is despite the fact that variants of the virus, some of them more infectious, are currently in circulation on the continent.

Stephanie J Salyer and coll. The first and second waves of the COVID-19 pandemic in Africa: a cross-sectional study. Lancet, Published online March 24, 2021.