Which vaccines are in phase III clinical testing ?

In December 2019 the appearance of a new coronavirus called SARS-CoV-2 (Severe Acute Respiratory Syndrome Coronavirus 2) provoked the worldwide pandemic that we are currently experiencing. For reasons that we are not sure of, immunity linked to these types of seasonal virus only lasts a relatively short time, from 80 days to several years, making reinfection possible. In the case of SARS-CoV-2, it seems that reinfection is possible in certain patients.

With an increasing number of patients infected by SARS-CoV-2, it’s necessary to study the kind of immune responses involved. So the neutralising capacity of antibodies as well as the response of T-cells may both have a link with the degree of severity of infection. 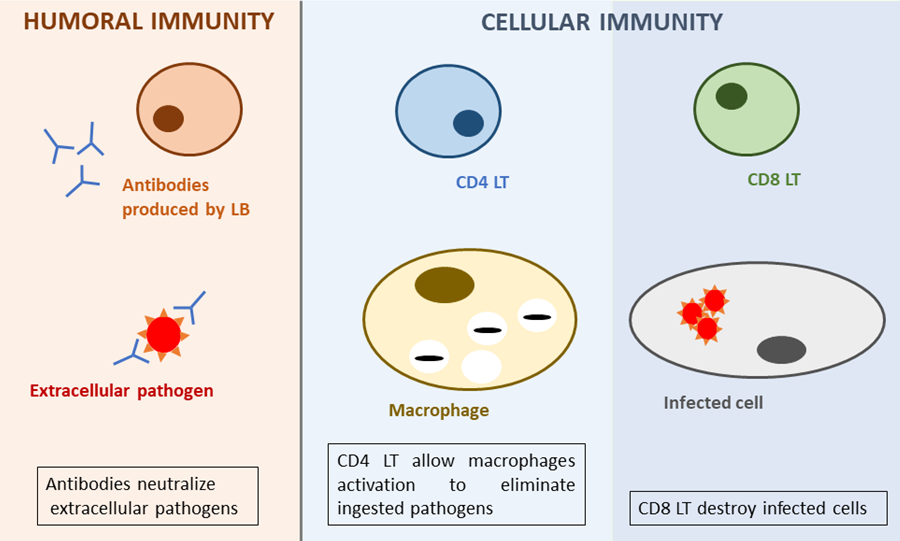 Certain antibodies produced (by the humoral response) as a result of infection by SARS-CoV-2 are directed against the protein on the virus surface, (the spike protein). They prevent the infection of human cells which express the ACE2 protein that the virus hijacks during the infection process, in competition with what we call the virus RBD (Receptor Binding Domain).

These neutralising antibodies may be produced after an infection or vaccination and can become excellent biomarkers of the immune system’s effectiveness. The vast majority of COVID-19 patients have antibodies specific to SARS-CoV-2 (IgM, IgA and IgG) just several days after infection, suggesting that a protective response to the virus is taking place. However, this antibody production seems to vary according to the severity of the infection. In patients who have had a moderate infection, a decrease in production of IgG specific to the RBD of the virus has been shown in the 2 to 4 months following infection. These results suggest therefore that the humoral response does not last in the patients. In case ofpatients with a severe fo rm of the disease, it was possible to demonstrate an increased production of IgG and IgM specific to the nucleocapsid of the virus.

Nevertheless, unknown factors remain. Consequently it has not been possible to correlate the concentration of neutralising antibodies to the degree of severity of COVID-19, suggesting that cellular immunity also plays a significant role in defences against SARS-CoV-2. It was noted that T-cells specific to SARS-CoV-2 produce more enzymes responsible for cellular death when viral antigens are present. In certain studies it has been possible to correlate the increase in T-cells specific to SARS-CoV-2 with the degree of severity of infection. However, the role of cellular immunity in defences against SARS-CoV-2 is not, for the moment, very clear. Equilibrium between the humoral and cellular responses may offer optimal protection.

The creation of a vaccine against SARS-CoV-2 is now crucial to get out of this pandemic. The different phases of vaccine development are as follows: 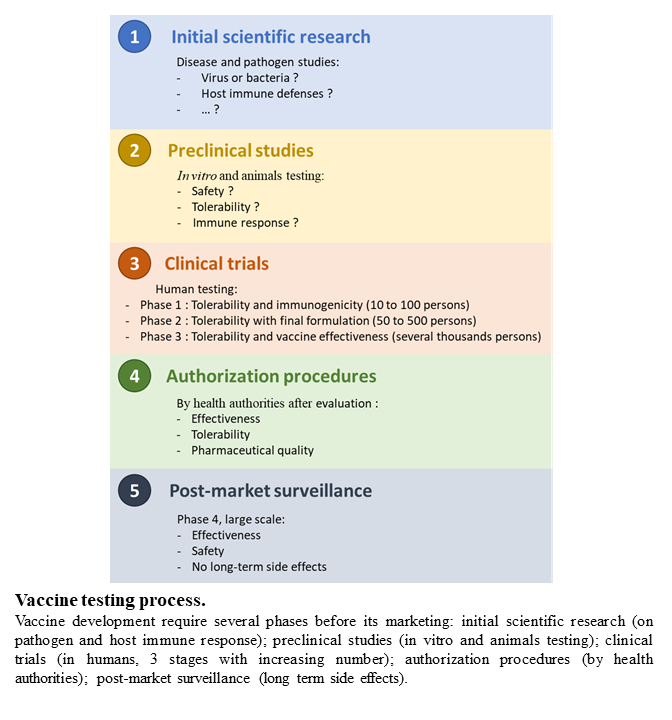 At the moment several vaccines are in the process of development (see the lexicon on clinical trials below). They are based on: 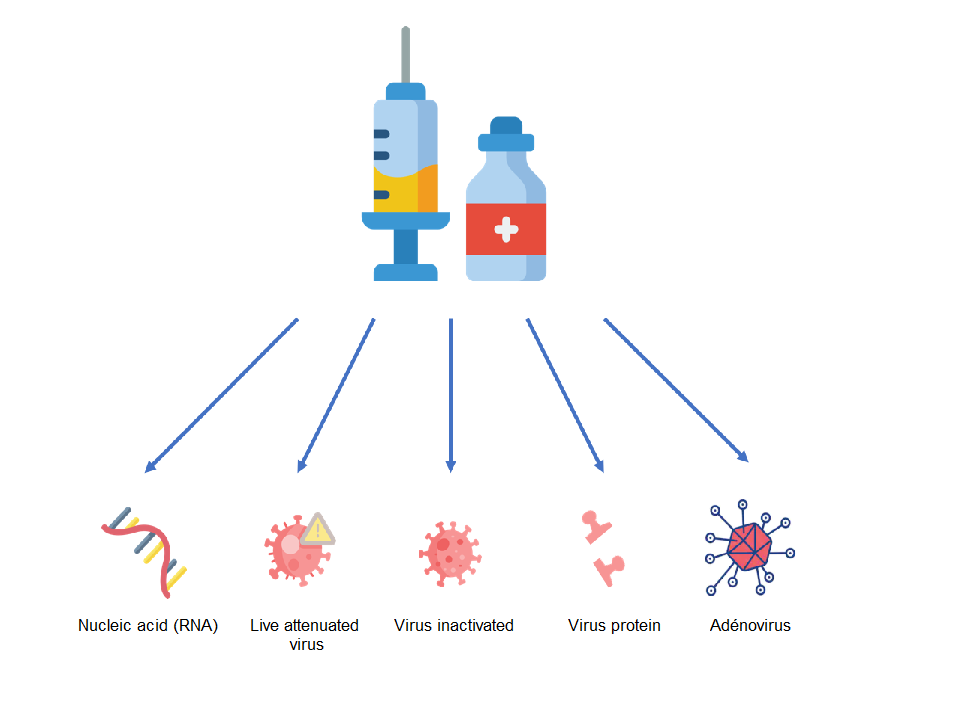 Here are details of the state of play of each vaccine:

Oxford University and the AstraZeneca company have created a virus using an adenovirus which contains a part of the genetic code of SARS-CoV-2 with the coding sequence for the spike surface protein. The vaccine has had a protective effect in several hon-human primates and there has been production of antibodies against the spike protein in patients participating in phase I and II  of clinical testing. Phase III began in August 2020 with more than 30 000 participants, but was halted following an adverse reaction in one volunteer (inflammatory immune disease).

The Moderna company‘s vaccine uses the virus’ RNA to encode the spike protein. During phase I and II testing an increase in neutralising antibodies was observed after an injection of 2 doses of the vaccine, similar to responses observed in convalescing patients. Similarly, the appearance of a cellular immune response  was observed (induction of Th1 cells). Phase III testing began in August 2020, also with more than 30 000 participants. Although it’s still under scrutiny, this promising vaccine has shown itself for the moment to be more than 92% effective.

There has been much discussion about these two companies in recent weeks[1]. They have also been developing two vaccines using the virus’ RNA. In phases I and II of trials there was an increase in the production of IgG specific to the RBD of the virus to a similar level found in convalescing patients. The two vaccines both showed the same levels of increase in neutralizing antibodies. However, since the second seemed to generate larger T responses, only this one was taken forward into phase III trails.

Johnson&Johnson use a living virus in which replication has been inhibited. When tested in macaque monkeys, the vaccine generated a large production of neutralizing antibodies and gave protection against SARS-CoV-2. It has been in phase III of trials since September 2020 and details of results have not yet been released.

The Gamaleya research centre based in Russia has published results of phase I and II clinical trials of its  Sputnik V[2]  vaccine, which employs two types of adenovirus. Patients have shown an increase in neutralizing antibodies specific to the RBD of SARS-CoV-2, an increase up to twice as large as in convalescing patients. A cellular response has also been shown to be present, with a peak at 28 days after vaccination. Phase III of trials will involve more than 40 000 participants.

The Chinese company CanSino Biologics also uses a vaccine based on an adenovirus. In phase I trials, an increase (x4) of neutralizing antibodies was observed in 75% of patients having received the maximum dose, 14 days after vaccination, and in 31% of patients having received a medium dose. Phase III involves more than 40 000 patients, but results of the study have not yet been released.

This vaccine, called CoronaVac, uses a chemically inactive virus. It was authorized by Chinese authorities in July 2020, well before the beginning of phase III clinical trials. This authorization allowed 90% of employees of the company to be vaccinated. In phases I and II an increase in neutralizing antibodies was observed. No information has been published concerning cellular responses that the vaccine may engender. Phase III was launched in Brazil and in Indonesia, with the intention of including more than 9000 hospital workers in Brazil.

The company Sinopharm has developed two vaccines that also use an inactive virus. For the first vaccine, in phases I and II, it was possible to show the same concentration of neutralizing antibodies in vaccinated patients as in convalescing patients, although there was no comparator group included in the research. No cellular response seems to have been activated by the vaccine. Phase III trials began in July and involved more than 20 000 participants. In August 2020 the company revealed that they had already administered the vaccine to hospital staff and patients at risk. Phase III trials involve only 9 000 participants and authorization has been received from the United Arab Emirates’ authorities for hospital staff to be vaccinated.

There still remains a great deal to learn about the kind of immunity induced by coronaviruses in general, but more particularly in the case of infection by SARS-CoV-2. However, the advances made this year prove that research into COVID-19 is advancing. The proliferation of different vaccines in development may bring benefits: they may have disparate effects on different sectors of the population (children, pregnant women, babies, immunodeficient patients, elderly people) and allow the creation of optimal immunity.