3 vaccines: which will be the most effective?

On the 9th November 2020 the American company Pfizer, in collaboration with the German company BioNTech, announced the creation of an anti-SARS-CoV-2 vaccine, with 90% effectiveness. On the 11 November the national centre for epidemiology and microbiology in Moscow claimed that its vaccine Sputnik V had 92% effectiveness. The most recent vaccine to be announced at the present time is made by the American company Moderna and could be effective in 94% of patients.

The Pfizer1 and Moderna vaccines are of the same type: they use the same fragment of the virus’ genetic material, the RNA, which allows production of the viral envelope’s Spike protein. The Spunik V uses two harmless adenoviruses which, when modified, produce the Spike protein.

Although the three vaccines are still in phase III of clinical trials, it seems likely they will soon be made available. There is the possibility that special authorisation for them to be put on the market could be given before the end of 2020 to help fight the pandemic.

Who will be the winner of the race to produce an effective vaccine? At the moment Moderna seems the most promising. Although all three have good rates of effectiveness, the Pfizer vaccine has to be stored at a temperature of -70°C during the whole of the delivery process, while Moderna’s can be kept in a refrigerator for more than a month, or kept at -20°C for more than 6 months. The Sputnik V vaccine also seems very promising, but the low number of COVID19 cases reported in studies of this vaccine could compromise its long-term results. 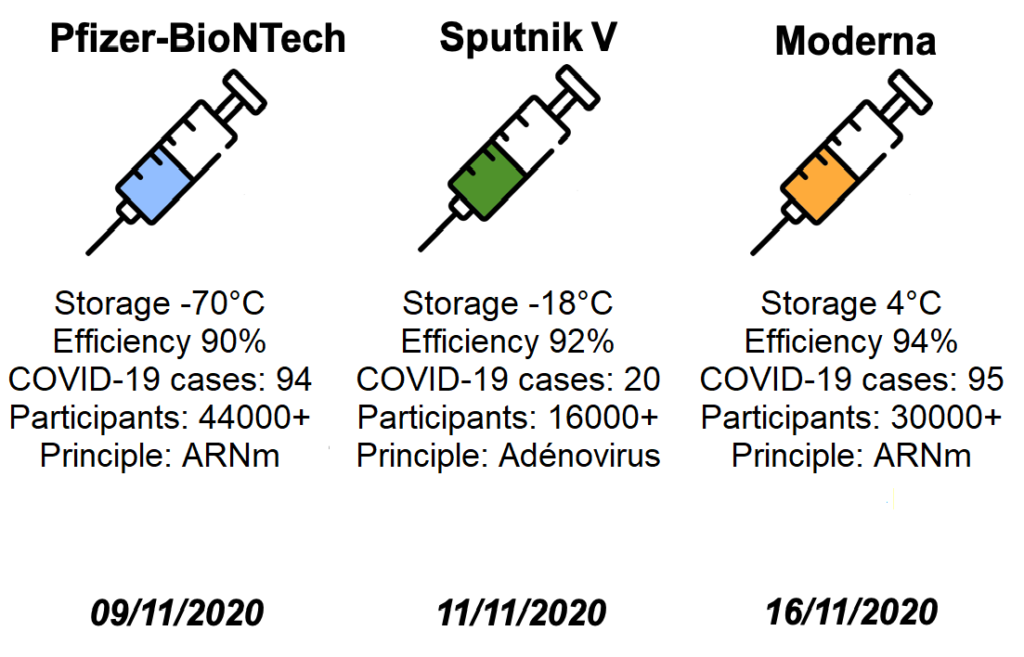 The Moderna vaccine is also the only one to have published indications as to the kind of immunity it can provide in terms of the potential severity of the infection. Here it’s a question of taking into account people who are liable to develop more serious illnesses than other people amongst the small percentage of patients who would not be protected by the vaccine. The Moderna vaccine also seems to immunise against serious infections, since out of the 95 infected patients in the sample (90 from the “placebo” group and 5 from the “vaccinated” group), only 11 from the placebo group developed severe forms of the illness.

Obviously there are still questions that need to be asked, notably about the long-term effectiveness of these vaccines. This information will only become available in phase IV of clinical tests. But it’s also important to know more about their effectiveness in vulnerable people (such as people aged 80 and over, or in people with underlying health issues).