What is the purpose of a third dose? The case of animals infected by Delta a year after vaccination

The Moderna RNA vaccine has remarkable efficacy (94%) against the original Wuhan strain of SARS-CoV-2. But the Delta (Indian) variant, currently dominant, has acquired some mutations that endow it with better transmissibility and partial escape from immunity, thereby reducing vaccine efficacy. In addition, several field studies (in the UK, US and Qatar) suggest that protection against non-severe forms of COVID-19 reduces as the level of antibodies falls following vaccination. There is currently no study on the length of protection endowed by the immune response. In order to rectify this lack, American researchers at the NIH (National Institute of Health, Bethesda) immunised rhesus macaques with Moderna, then evaluated protection against Delta after one year.

After the vaccination, blood sample analysis showed a peak in levels of antibodies targeting the RBD (Receptor Binding Domain of the spike, original strain) 6 weeks after immunisation, which fell 130-fold during the first 6 months, then a further 3 times in the latter 6 months. At their peak, the anti-RBD antibodies specific to Delta and Beta were 5,4- and 8-fold inferior, and 4-fold inferior to those specific to the original strain after one year. The levels of neutralising antibodies against Delta were 6,9-fold inferior to  those against D416G, and followed a similar trend: they fell 8,2-fold and were scarcely detectable after a year.

However, biophysical investigations indicate that even if antibodies drop, their efficacy increases due to constant maturation which evolves towards cross-neutralising immunity: these antibodies become able to recognise different variants. The proportion of antibodies that neutralise the original strain remains stable over a year, but those which neutralise Delta increase.

The same patterns were observed in the lungs: the anti-RBD antibodies of the original strain fell 5 000-fold in one year and those specific to Delta were constantly 4 to 6 times less in number. However, the levels of antibodies present in the upper respiratory passages were higher and remained stable over a year, indicating that there are different mechanisms at work in these two anatomical sites. The vaccine brings about a long-term memory B cell response, even though this does weaken over time: the predominant cells are capable of simultaneously recognising the original strain and Delta (dual-binding). It also brings about a TH1 and TFH cellular response, (but not a TH2 response), which also weakens after a year, as well as a weak T CD8+ response.

One year after these post-vaccination measurements were concluded, the researchers decided to infect the animals with Delta. Seven days later, a slight reduction (5-fold, as compared to the placebo group) in viral replication in the upper respiratory passages (nasopharynx) was observed. However, the levels of replicating virus dropped 300- fold in the lungs: the pulmonary antibody response was relatively stable, but was slightly delayed by the prior drop in antibody levels. In addition, the upper passages need more antibodies for adequate protection. Four days after infection, the blood memory B cells were reactivated and began to multiply (anamnestic response), resulting in an antibody response in the lungs that increased 590-fold. Seven days after infection by Delta, no viral protection was detected in the lungs of vaccinated animals and signs of inflammation were minimal, unlike in the placebo group.

The Moderna vaccine therefore gives long-term protection to the lungs against severe forms brought on by the Delta variant. After a year, protection in the upper respiratory passages was weaker while that in the lungs was present, though delayed. This configuration probably gives protection from severe cases, but favours transmission.

In this work, protection did not correlate with levels of neutralising antibodies, unlike in other studies where animals were infected a few weeks after vaccination. In the long-term, the reactivation capacities of pulmonary memory B cells is a better correlate of protection. This pertinent study underlines the importance of a 3rd dose to limit symptomatic cases of COVID-19 as well as transmission. 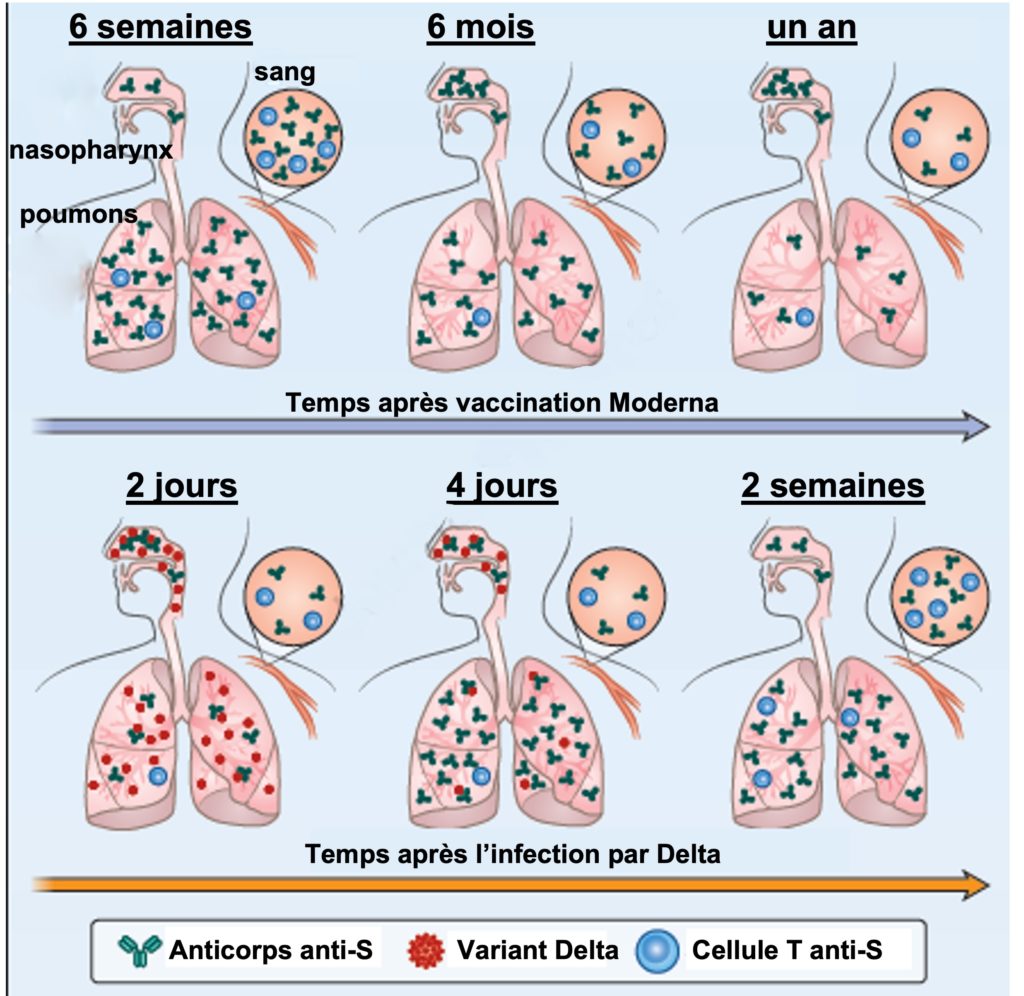 Matthew Gagne and coll. Protection from SARS-CoV-2 Delta one year after mRNA-1273 vaccination in rhesus macaques is coincident with anamnestic antibody response in the lung. Cell, 3 December 2021.