Independent clinical trials have shown that the Pfizer and Moderna mRNA vaccines give 94-95% protection against symptomatic forms of COVID-19. But immunocompromised patients, who in general develop a less robust immune response, were not included in these trials. However, amongst this group there are patients with cancer who are treated with chemotherapy and whose care underwent changes during the pandemic. In addition, their risk of death is 10 to 30 times higher than in the general population. Whether we are considering natural infection or vaccination, the anti-SARS-CoV-2 immune response in these patients is poorly understood.

To help to remedy this problem, American researchers at the University of Arizona evaluated the effects of the Pfizer vaccine on 53 patients treated for solid tumours with immunosuppressant drugs, as well as on 50 healthy patients. The aim was to measure levels of neutralising antibodies as well as the effectiveness of the cellular response. Blood samples were taken on the days of the 1st dose and 2nd dose (3 weeks later), then 5 to 11 days later.

After the 1st injection, levels of antibodies increased progressively in the 2 groups. All the healthy patients developed neutralising antibodies compared to only 67% of the cancer patients. This figure increased to 80% after the 2nd injection and levels increased approximately 3-fold. These patients developed 11 times less anti-RBD antibodies (the domain in the spike which reacts with the ACE2 cellular receptor and enables viral entry). On the other hand, regarding the cellular response, the majority of patients developed CD4+T and CD8+T responses directed against the spike, comparable to healthy patients, though a little lower. After the 2nd injection, the patients developed B memory cells specific to the RBD, but 10 times less in number. This was not a reactivation of pre-existing B memory cells (from previous coronavirus infections), but cells that were indeed produced by vaccination. After vaccination, several patients who were being treated with immunosuppressant drugs did develop an immune memory which should be able to be reactivated in the future (anamnestic response).

In order to evaluate the effects of a 3rd dose of the vaccine and validate these theories, the researchers carried out a supplementary clinical trial on 20 cancer patients from the same cohort. This injection was given between 42 and 111 days after the last blood sample. No serious side-effects were observed in the weeks following the injection. In 16 patients there was a modest though significant rise in anti-RBD antibodies as well as 3 times more neutralising antibodies. Antibodies were even detected in two patients who had not developed any after the first two injections. On the other hand, there was no stimulation of a T cell response, for reasons unknown. Unlike with healthy patients, the level of B-memory cells did not correlate to the level of antibodies in the blood, probably due to the fact that the different aspects of the immune response were not coordinated.

This work shows that anti-cancer drugs affect the antibody and cellular immune response induced by the Pfizer vaccine (except for the T cell response, which was reduced only a little). While it is encouraging to see that the majority of patients developed at least some antibody or cellular response after vaccination, and that the antibody response improves after a 3rd injection, it remains to be seen whether this will be sufficient to give protection against severe forms of COVID-19. There also needs to be evaluation as to whether the timing of chemotherapy treatment in conjunction with the vaccine has any influence, as well as confirmation of these results on other types of cancer and on larger cohorts. 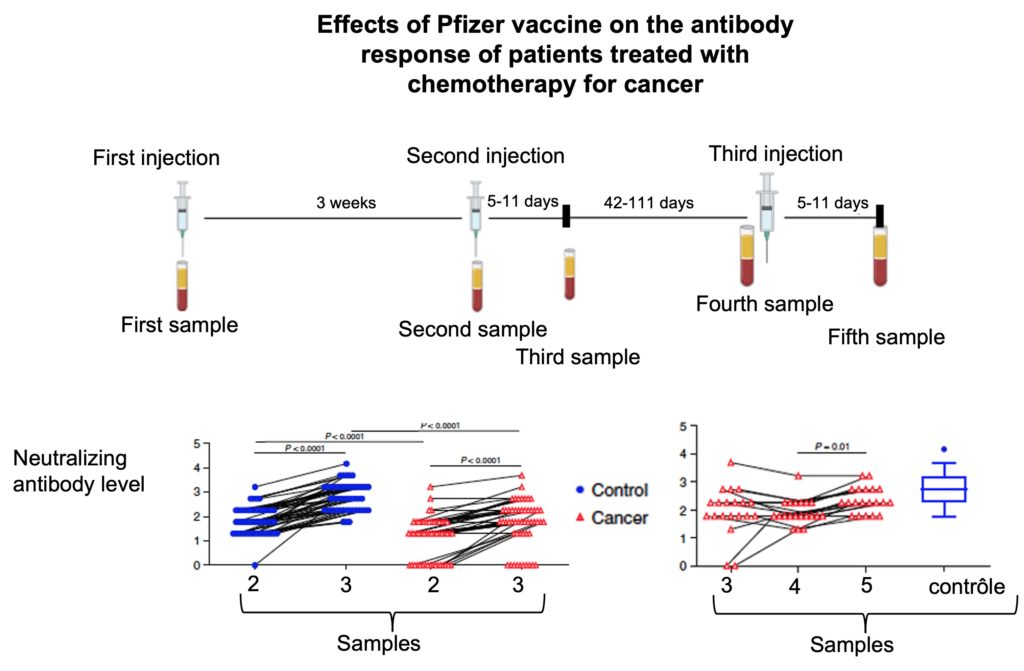