COVID-19 was declared to be a pandemic by the WHO (World Health Organisation) on the 11th March 2020. Heads of governments reacted to this situation by informing their populations of measures that were to be put in place to inhibit the virus’ spread.

Numerous possible communication channels exist to disseminate public information. Social media is quick and immediate, essential in this moment of crisis. Many heads of state already use Twitter, including all those in the G7 group, with the exception of Angela Merkel. Twitter is a social networking service with around 330 million active users per month. Compared to radio or television, it’s a recent means of communication not yet used by all heads of state. An earlier study showed that people who follow political personalities on Twitter do so out of convenience, or for entertainment, or for reasons of research.

A more recent study analysed how many heads of state used Twitter to keep the public informed at different moments of the COVID-19 pandemic crisis, how exactly they used it and what was its impact on the population. Twitter data from the accounts of 143 heads of state was studied. Use of key words such as “COVID”, “corona” or “virus” was noted. It was shown that only a few heads of state felt that it was important to share information about COVID-19 in January 2020, while the majority had tweeted about the epidemic by mid-March. By the 7th of May, 64,8% of heads of state of members of the United Nations had already tweeted about COVID-19. Researchers were also interested in heads of states’ vocabulary, and used statistical representations in the form of word-clouds to investigate.

The results were as follows : 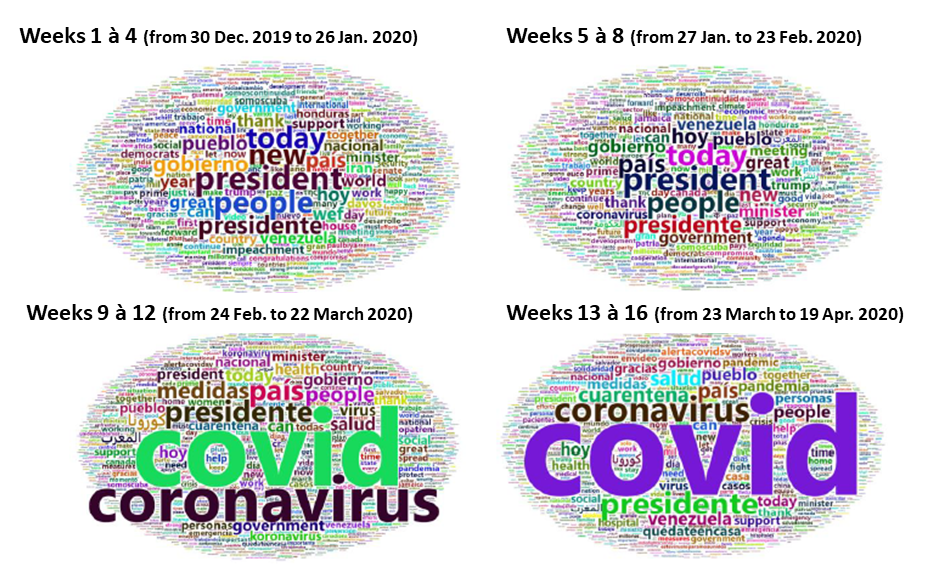 During weeks 1 to 4 of 2020 there was no mention of the epidemic which had then just started. It was only at the end of January that politicians began to pass on information to the people. The word “coronavirus” appeared during weeks 5 to 8, but the term did not stand out in word-cloud analysis. However, the terms “COVID” and “coronavirus” dominate the word-clouds in weeks 9 to 12 and 13 to 16. During weeks 13 to 16, “COVID” was more used than “coronavirus” in comparison to the preceding weeks. Other words were also regularly used in connection with sanitary measures in place: “social distancing” or “quarantine” for example.

The third and fourth aspects of study involved  the frequency of heads of states’ tweets and the patterns of growth in their follower numbers.

This can be shown graphically as follows : 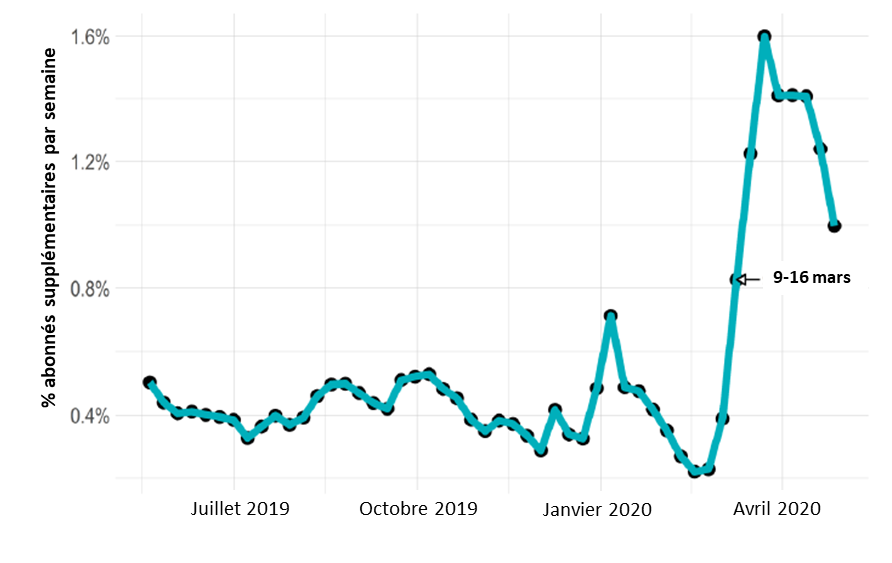 It should also be noted that the rate of growth in followers was not the same for all heads of state. For example, Giuseppe Conte (Italy), Boris Johnson (United Kingdom), Ivan Duque (Colombia) and Alberto Fernandez (Argentina) had an increase in followers of 15% in one week. Emmanuel Macron (France) and Pedro Sanchez (Spain) showed a lesser increase in follower numbers due to the fact that their initial numbers were high. Donald Trump (USA) had a larger increase in numbers at the beginning of the year, at the time of the impeachment proceedings, than during the spread of COVID-19. In addition, it was shown that the heads of state who tweet most frequently are often those who gain the most followers. It’s also possible that increases in followers depends on ease of internet access and the number of cases of COVID-19 in different countries.

In conclusion, this study shows that the COVID-19 pandemic impacted the nature of the tweets of heads of state and that Twitter has been an important means of communication with their citizens.

The use of Twitter by state leaders and its impact on the public during the COVID-19 pandemic. Michael Haman, Heliyon, Volume 6, Issue 11, November 2020.