Tofacitinib: an effective drug against serious cases of COVID-19?

Tofacitinib is an oral medicine, initially used against auto-immune diseases such as rheumatoid arthritis, modulating immune system and inflammatory responses. In severe cases of COVID-19, the clinical symptoms are principally due to an immune response exacerbated by what we call a cytokinetic storm. Tofacitinib may improve levels of inflammation in patients. A study carried out by Brazilian researchers (at the Hospital Israelita Albert Einstein, University of São Paulo) and Pfizer laboratories has evaluated its safety and effectiveness in patients hospitalised with pneumonia caused by SARS-CoV-2 infection.

The researchers carried out a multi-centre study (on patients from different sites), randomised (the treated group was compared to a placebo group) and double-blinded (neither the patient nor the doctor knew if the patient was receiving the real drug or the placebo). The study involved 289 patients between September and December 2020 in more than 15 centres in Brazil: 144 patients were given Tofacitinib and 145 the placebo. The volunteers included in this cohort were patients hospitalised with a serious form of COVID-19, with an average age of 56. The patients were given a 10mg dose of Tofacitinib, or of the placebo, twice a day over a period of 14 days or until their release from the hospital.

What were the results of this study? Clinical complications occurred in 26% of patients treated with Tofacitinib (with 14% suffering serious consequences), against 22% (12% with serious consequences) in the placebo group. In the group of patients treated with Tofacitinib, 18% died or suffered respiratory failure in the 28 days after the beginning of treatment, against 29% in the placebo group.

So Tofacitinib allows a reduction in deaths and respiratory failure in patients with severe forms of COVID-19. Despite the rapid development of safe and effective vaccines, part of the population remains at risk from COVID-19. For this reason, there is still a need for effective, easy to administer medicines for hospitalised patients. 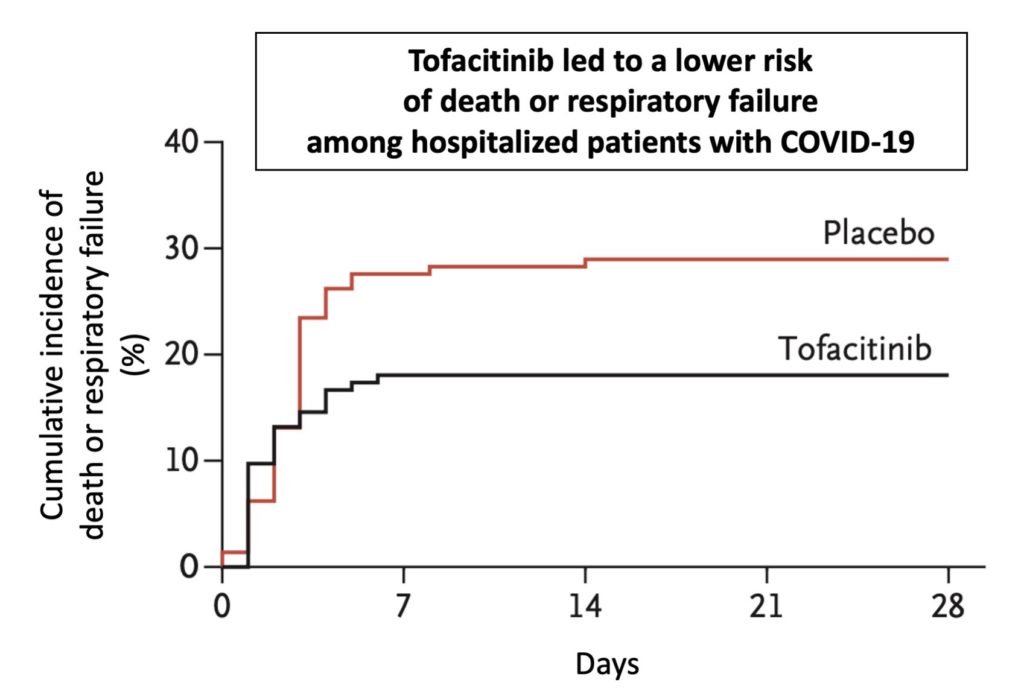