The synergy of two antibodies

SARS-CoV, MERS-CoV and SARS-CoV-2 have all been at the origin of epidemics over the last 20 years. The β-coronaviruses often come from animals in which they exist without causing illness, in particular bats. When the human immune response moves into action, neutralizing antibodies target the spike viral protein and block interaction of the virus with the ACE2 cellular receptor. Within the spike, the RBM (Receptor Binding Motif) sub-domain contained in the RBD (Receptor Binding Domain) is extremely immunogenic and induces neutralizing antibodies that are effective against SARS-CoV-2. However, the RBM is not well conserved among the b-coronaviruses so antibodies are not, most of the time, able to neutralize several viral strains at once. In addition, the antigenic drift of the RBD allows certain variants to evade neutralizing antibodies, which calls into question the effectiveness of current vaccines and antibodies.

A team of Californian researchers (at the Scripps Research Institute) have isolated an antibody (CV38-142) in a COVID-19 patient that is capable of neutralizing SARS-CoV-2 and SARS-CoV in vitro. Using the Biolayer Interferometry (BLI) method, they showed that the antibody binds with a strong affinity that is comparable to the RBD of SARS-CoV-2 (Wuhan), SARS-CoV, RaTG13 and the Guangdong Pangolin coronavirus. The binding of the CV38-142 antibody to the spike does not impede the binding of several other powerful neutralizing antibodies, amongst which one (COVA1-16) has cross-reactivity. Used in a “cocktail”, the CV38-142 and COVA1-16 antibodies act synergistically and are able to neutralize SARS-CoV-2 and SARS-CoV much more effectively than if they act individually. This is true for the UK (B.1.1.7) and South African (B.1.351) variants.

The researchers then carried out structural analyses to understand how the CV38-142 antibody works. Using crystallography, they determined that it binds to a  conserved SARS-CoV-2 RBD site, which is remote from the RBM. The principal requirement of this interaction is the presence of a sugar (N-glycosylation) on the N343 amino acid, because if it is modified by enzymatic treatment, for example, binding by the CV38-142 antibody is reduced. Unlike the RBD region targeted by the COVA1-16 antibody, the target of the CV38-142 is less conserved and exposed to solvents. Although binding is equally effective on both strains, 8 out of 20 amino acids differ between SARS-CoV and SARS-CoV-2, resulting in a loss of direct interaction between the antibody and the spike. This is compensated by numerous indirect interactions, since 24 water molecules act as intermediaries for 60 hydrogen bonds in the case of SARS-CoV-2. These mechanisms allow for some flexibility in antigenic variations. Surprisingly, the CV38-142 antibody does not compete with the ACE2 for binding with the spike (according to BLI and SPR techniques), so its neutralization mechanism is unconventional. Electron microscopy analyses showed that the antibody interacts with several spike trimer conformations, in particular the RBD “up” and “down” states. Its mechanism may be based on its ability to bind dimeric spikes, or two spike molecules that are close. Getting rid of this bivalence (antibody in the form of Fab) alters the neutralization capacity of the CV38-142 antibody.

The combined action of the CV38-142 and COVA1-16 antibodies, both neutralizing and with cross-reactivity, therefore improves neutralization effectiveness against several strains of b-coronavirus, including the UK and South African variants. Other cross-reactive antibodies, targeting the same zones of the RBD, have already been described and may still further improve this approach. Treatment by antibodies that do not target the RBM, too prone to immune evasion, provide promising approaches to combat the antigenic drift of SARS-CoV-2. This study also provides useful information for the creation of future vaccines that may be effective against other β-coronaviruses. 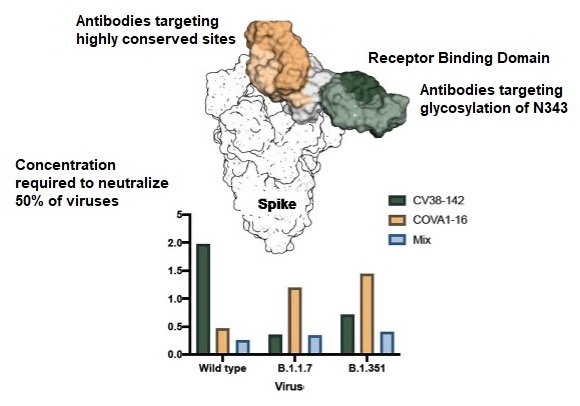