SARS-CoV-2 variants have rapidly supplanted the initial Wuhan strain and have greater capacities of transmissibility. The first variant to emerge was the D416G, with a mutation that improved the spike’s interaction with the ACE2 receptor, but which did not enable it to evade neutralizing antibodies (See News-COVID-19.info letter 8-14 Mars 2021). More recently mutations and deletions have appeared in the RBD (Receptor Binding Domain) and the N-terminal of the spike, resulting in the appearance of the UK variant (B1.1.7), the South African variant (B.1.351) and two distinct Brazilian variants (P1 and P2). Recent studies suggest that these mutations are selected in vivo by selection pressure brought about by neutralizing antibodies induced by the initial strain. These variants have different degrees of sensitivity to the antibodies and can potentially evade the immune response. The majority of studies on this subject use synthetic viral systems and, less frequently, authentic viruses: this can influence results since mutations not situated in the spike, notably non-structural proteins, may increase viral propagation or sensitivity to antibodies.

In order to correct this problem, researchers at the Pasteur Institute in Paris compared the sensitivity of authentic viral strains D416G, B.1.1.7 and B.1.351 to neutralizing antibodies. The viruses were isolated in patients, sequenced then amplified in vitro. In parallel, the serum of 25 convalescing and non-vaccinated COVID-19 patients (blood with no cells or clotting factors and containing antibody mixtures, including neutralizing antibodies) was taken 3 – 6 months after the appearance of symptoms. Using an in vitro system of infection (S-Fuse GFP), they showed that the D416G strain (the reference strain) and the B.1.1.7 strain had the same sensitivity to antibodies after 3 or 6 months, whereas the B.1.351 strain is 5 to 10 times less sensitive. These observations were confirmed using a supplementary cohort of 30 patients, 9 months after their infection: the level of neutralizing antibodies was 6 times less, and 40% of the serums did not neutralize the B.1.351 strain.

After adapting their system for flow cytometry, they analysed these same serums, the 2 monoclonal antibodies (purified, with each having a single target) and the soluble ACE2, and they evaluated their capacity to bind to the spike proteins of the 3 strains. While the mAb102 antibody binds in an identical manner to the three spikes, the mAb48 binds less well to the B.1.1.7, and not at all to the B.1.351. Overall, the serums recognised the 3 spikes identically, with a slight fall for B.1.351 in the samples taken later. Binding of the ACE2 to the spike of B.1.1.7 was much stronger than for B.1.351, but both were superior to that of D416G. So the ability to bind to the spike does not reflect the ability to neutralize.

This approach was repeated with samples taken from 19 vaccinated medical personnel (Pfizer Cominarty; no prior infection) 2 to 6 weeks after the 1st dose, the second injection being given in the 3rd week. D416G was neutralized in week 2, B.1.1.7 in week 3 (but less effectively), and B.1.351 in week 4 (a 2nd injection being necessary), at a lower level than the 2 others. Three weeks after the 1st dose, 63% of the serums neutralized the D416G, 38% the B.1.1.7, and none the B.1.351. Three weeks after the second injection (week 6) the level of antibodies increased significantly and 92% of the samples were able to neutralize the D416G and B.1.1.7 strains, and 77% the B.1.351 strain, but with much lower levels of antibodies. It was surprising that neutralizing antibodies were not found in the nasal mucus of vaccinated individuals, whereas levels in the blood were satisfactory. The Pfizer does not, therefore, develop an early antibody response in the oro-nasal mucous membranes. 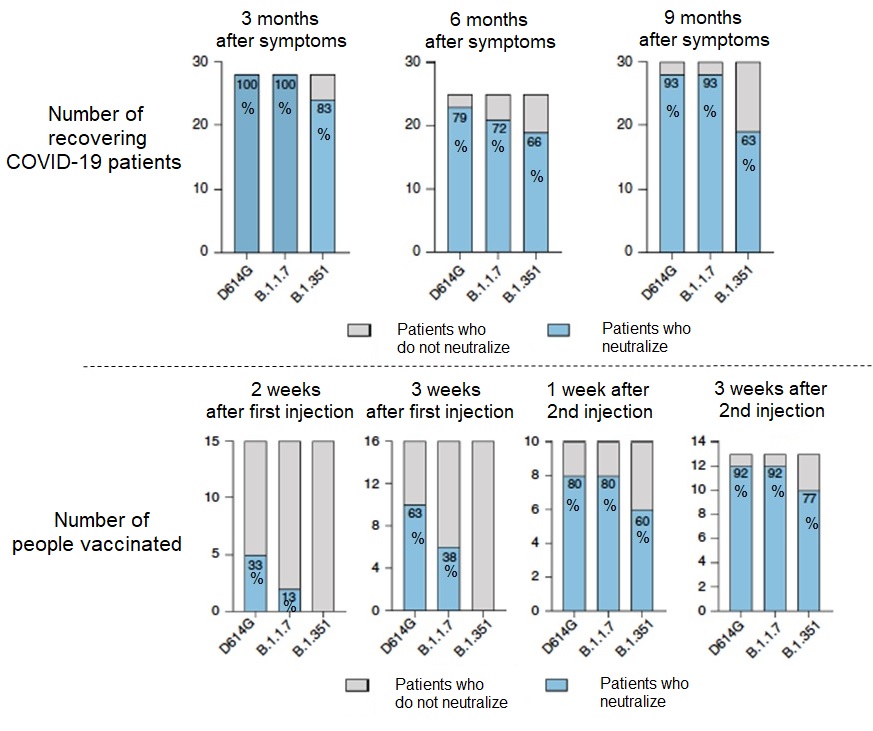 This study is limited in certain respects, and the researchers continue to work to improve this: the cohorts were small, the post-vaccination analysis time was short and not based on cellular responses. However, by using authentic viruses, it does provide useful information on the Pfizer vaccine, which induces an effective neutralizing response against the D416G and B.1.1.7 strains, from 2 weeks after the 1st injection. But with the B.1.1.7 and B.1.351 strains, there is a delay in this response, and antibodies are fewer in number.

This study underlines the importance of the second Pfizer dose, since this increases antibody levels significantly and demonstrates that such high levels are crucial to give protection against variants. The Pfizer vaccine does not prevent oro-nasal infection, but blocks the spread of the virus into the respiratory passages, thus avoiding serious illness. But in the longer term, when the overall level of antibodies falls, those antibodies that are capable of neutralizing the B.1.351 strain may be insufficient in number to prevent re-infection by the variant, which is 14 times less sensitive to neutralizing antibodies induced by the vaccine than the original strain. The E484K mutation, which enables the B.1.351 and the P1 strains to avoid neutralization, has been recently detected in a B.1.1.7 strain, representing a serious menace to the vaccinated population.

Delphine Planas and coll. Sensitivity of infectious SARS-CoV-2 B.1.1.7 and B.1.351 variants to neutralizing antibodies. Nature Medicine, 26 March 2021.