The Fc domain proven to be useful

At the moment only Dexamethasone (immunosuppressant) and Remdesivir (antiviral) have proved to be clinically effective against COVID-19, and then only in certain conditions. The passive transfer of neutralizing antibodies (taken from convalescing patients) is an interesting alternative since it can be used as a preventative measure as well as in treatment. This approach has proved effective in a certain number of preclinical models (mice, hamsters, monkeys) and has shown promising results in clinical trials. The FDA (Food & Drug Administration) has already authorized Bamlanivimab and Casirivimab (monoclonal neutralizing antibodies) in the treatment of some patients. The most effective antibodies  target the RBD (Receptor Binding Domain) of the spike protein, which interacts with the ACE2 receptor, thereby blocking the virus’ entry into the target cell.

In addition to this direct neutralization mechanism, the antibodies can also enable the killing of infected cells by the “effective Fc function”: the Fc domain (different to that which interacts with the spike) binds to the FcgR receptors situated on certain immune cells, and optimizes their immune response. This appears to be effective in the treatment of infected patients. 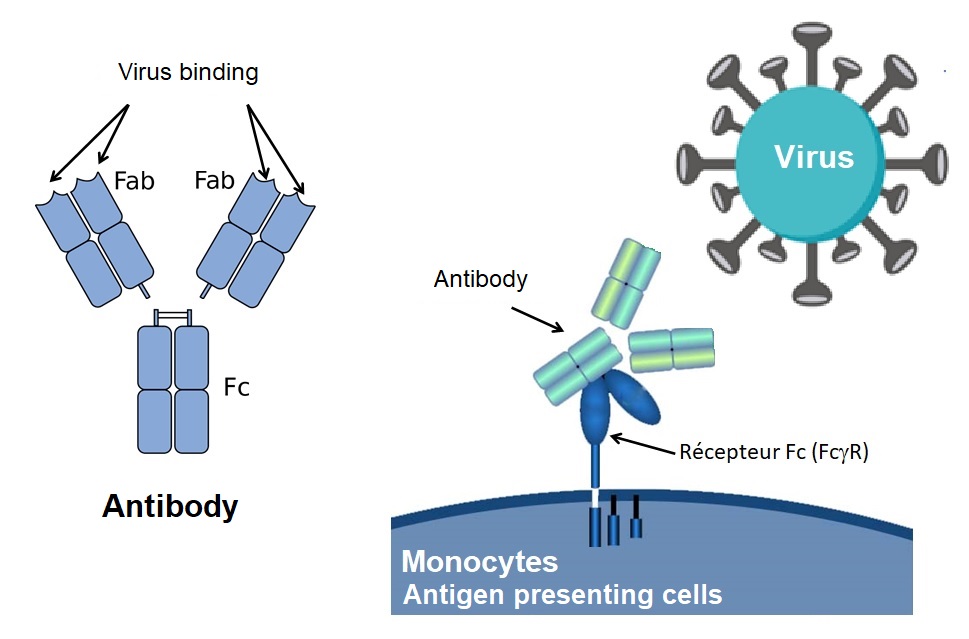 However some studies indicate that this mechanism may increase viral infection or cause undesireable immune system responses. It is therefore necessary to understand the implications of using the FC function as specific protection against SARS- CoV- 2.

American researchers at the Universities of Saint Louis and Nashville evaluated the effects of a neutralizing antibody with its Fc function removed. They used an antibody directed against the RBD, the COV2-2050. They muted its Fc region to make it inoperative (LALA-PG), then it was characterized by in vitro testing. They intraperitoneally administered increasing doses of antibodies to transgenic mice, which express the ACE2 human receptor, 16 hours before the mice were infected with SARS-CoV-2 (intranasally).

What were their observations ? With a control antibody (non-specific to SARS-CoV-2), the mice lost weight and showed a high level of viral charge over the next days (detected by PCR). When COV2-2050 or LALA-PG were administered, both gave the mice the same level of protection: weight loss was blocked with 1,6 mg of antibodies, and viral infection was reduced to 8 mg. These results were based solely on the antibodies’ direct neutralization functions.

But when the COV2-2050 antibody was given after infection (1, 2 or 3 days later), it reduced weight loss, viral charge, pulmonary inflammation and lethality. However, the same results were not obtained with LALA-PG. It was observed that the effective Fc function reduces the activation and infiltration of immune cells, as well as levels of inflammatory cytokines (IL-6, IFN-g, CXCL10…) in the lungs, which improves respiratory function and clinical prognosis.

The native antibody therefore seems to be more effective when it is administered before the peak level of viral replication, which is after 2 days in this model. These results were confirmed in hamsters, but also using 3 other neutralizing antibodies (COV2-3025, COV2-2072, COV2-2381).

After carrying out RNA sequencing of the pulmonary cells of the mice 8 days after infection, the researchers observed that COV2-2050, but not LALA-PG, reduces the expression of genes linked to innate immunity (dependent on the IFN and NF-kB channels). In addition, the expression of genes involved in the repair of pulmonary tissues remained intact and identical to that of naive mice.

In order to identify the types of cells involved in these mechanisms, the researchers re-launched the experiment, and antibodies specific to certain immune cells (monocytes, NK, neutrophiles, TCD8+) were administered to mice to prompt their destruction (depletion by antibodies). They observed that the presence of monocytes (which may differentiate into macrophages or dendritic cells) is necessary to protect against weight loss, whereas TCD8 are indispensable to eliminate the virus from the organism. During this study, increases in infection levels or undesirable inflammatory reactions were not observed. 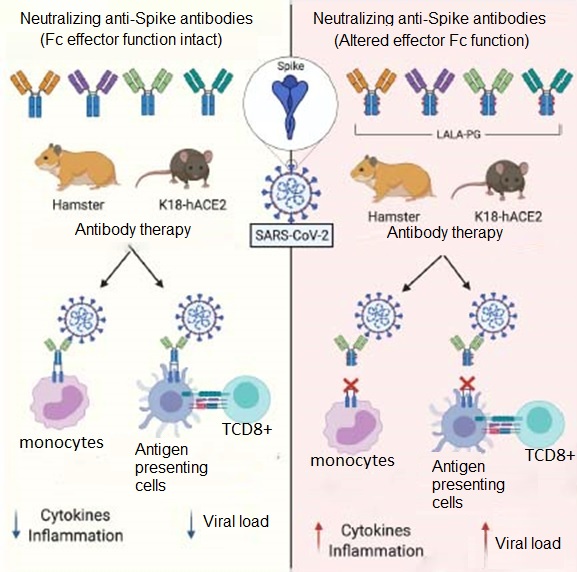 In conclusion, the antibody neutralization function seems to be enough to prevent infection (prophylactic treatment), but once infection is established, this mechanism no longer suffices as treatment and the effective Fc function becomes indispensable. By its action on the monocytes, which express FcgR and secrete cytokines), the Fc reprograms the immune response and reduces inflammation. In addition, phagocytosis of the virus by these cells (once they have matured) will optimize the activation of the TCD8+ cells, which in turn will take charge of lysing infected cells and eventually eliminate the virus from the organism. Although it is worth further investigating these mechanisms, the researchers suggest that optimization of neutralization domains and of the antibody Fc function by molecular engineering will improve the effectiveness of these treatments.