SARS-CoV-2 is a virus that has a single strand RNA genome of 30,000 bases. After the entry of the viral particle into the host cell, its genome is replicated, so as to be encapsidated in new viral particles, and in addition, to be translated into proteins in order to form new virions. Viral RNA is therefore used as a template to produce non-structural proteins, allowing RNA replication and virion assembly, and to generate structural proteins to form these virions (capsid proteins, envelope, membrane, spike and other accessory proteins). Only the 2 extremities of the viral genome (5’ and 3’) do not act as a template for producing other proteins (UTR – Untranslated Regions) but have a role in the structure of this RNA.

Researchers at the University of Tsinghua and the Academy of Medical Sciences in Beijing analyzed structures of viral RNA in vivo and in vitro, in particular its 2 extremities, which are not translated into proteins. The aim was to understand the role that these regions play in regulating the translation of the viral genome into proteins, as well as to identify host proteins binding to viral RNA.

What were the conclusions? The conservation of the RNA structure in different RNA genome viruses suggests the UTR structure has an important function. This viral genome structure was thus able to be analyzed in different coronaviruses including SARS-CoV-2. It appears that the different UTR regions are for the most part conserved between coronaviruses, which is in line with the phylogeny of the family: the lines that are closest in sequence are the closest in structure. The differences in structure of the UTR regions in coronaviruses can reveal differences in their functions. These UTR regions have specific RNA structures, called “rod-loop” structures, which influence the regulation of the translation of viral RNA into proteins. In addition to the UTR regions, we now know that the structure of the viral subgenomic RNA, which serves as a template for the production of structural proteins, can have an impact on the regulation of translation.

It has already been shown for other viruses having an RNA genome that the host proteins (RNA Binding Proteins, abbreviated to RBP proteins) bind with viral RNA and regulate the virus’ infection cycle. These researchers studied these proteins in relation to SARS-CoV-2. They may well be interesting targets for treatment designed to reduce viral infection. It was observed that in addition to recruiting proteins from the cellular mechanisms in order to produce its own proteins, SARS-CoV-2 may interact with other cellular proteins, for example helicase, a cellular protein that helps the virus to evade the immune system. Thanks to computer modelling, the researchers identified a total of 42 cellular proteins that can interact with viral RNA. Some of these proteins have already been recorded as interacting with the genomes of other coronaviruses.

The analysis then focused on 11 of these RBP proteins, capable of interacting with the RNA of SARS-CoV-2, which was confirmed in vitro for 9 of the proteins. The effectiveness of SARS-CoV-2’s replication could therefore depend on these RBP cellular proteins. So the conserved RNA structures from the SARS-CoV-2 genome, targets for the RBP, may be targeted in new treatments. The researchers identified some SARS-CoV-2 UTR sequences as possible antiviral action sites: antisense oligonucleotides (ASOs), that can bind to RNA sequences, targeted in different regions of the UTR, reduce viral infection. In addition, drugs known to interact with RBP, identified as binding to SARS-CoV-2 UTR, also inhibit viral replication. 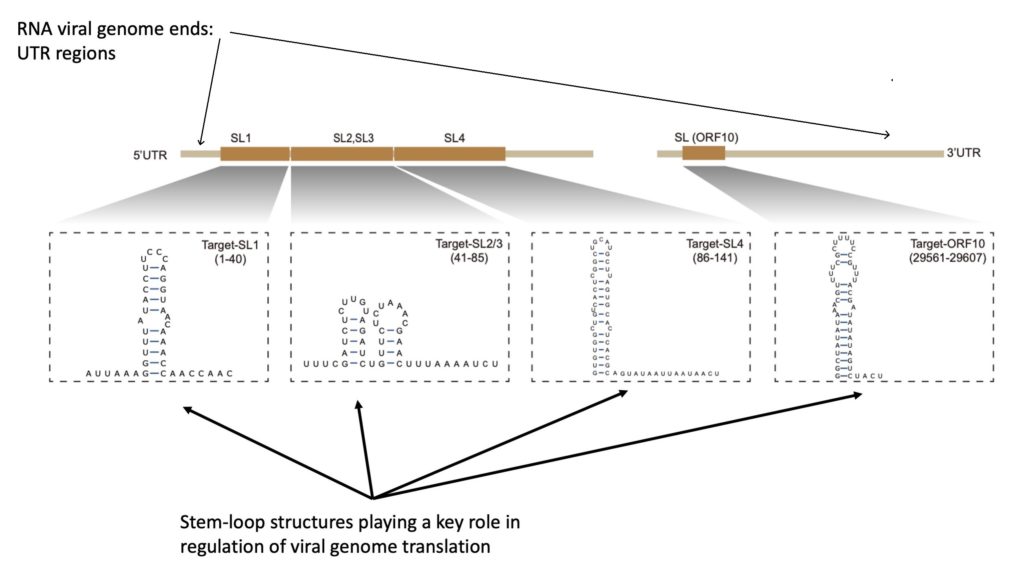