The devastating consequences of Delta for the city of Delhi

India was not affectedly too badly at the beginning of the pandemic, but faced a much more severe crisis from April 2021. In the capital, Delhi, the virus had already been more widespread than in the rest of the country during the 1st wave, with more than 55% of inhabitants having been infected by January. It was reasonable therefore to expect that natural immunity would develop amongst these people against COVID-19. However, Delhi was amongst those cities most affected by the 2nd wave. The city’s hospitals were overwhelmed by levels of admissions and deaths. Scientists have analysed the reasons as to why this period was so devastating in Delhi.

The researchers studied all available data from diagnostic test results, sequencing and serological monitoring (presence of antibodies against SARS-CoV-2). This murderous wave is thought to have been due to the emergence of the Delta variant. Indeed, its proportionate rise correlates with the increase in the number of cases and with pressure on hospitals. But why did the Delta variant trigger such a worsening of the epidemic?

The scientists constructed a model of SARS-CoV-2 transmission and mortality rates in order to characterise the properties of the Delta variant. It seems that it is more transmissible than other variants (1,3 to 1,7 times more), notably compared to the Alpha (UK) variant that had been dominant until then. The Delta variant was thus able to spread much more quickly In addition, it is able to partially escape immunity endowed by infection by another variant. For this reason, even though a majority of the population of Delhi had already been infected by the virus by January 2021, acquired immunity against the new variant was partially ineffective from April onwards.

In conclusion, the Delta variant was capable of causing a rapid upsurge in the number of COVID-19 cases even in a population that had already been infected by another variant, or vaccinated. In India, after this massive wave of the epidemic, numbers of cases decreased. Since a large part of the population of Delhi had now been recently infected by Delta, there was a good level of immunity, at least against this variant. 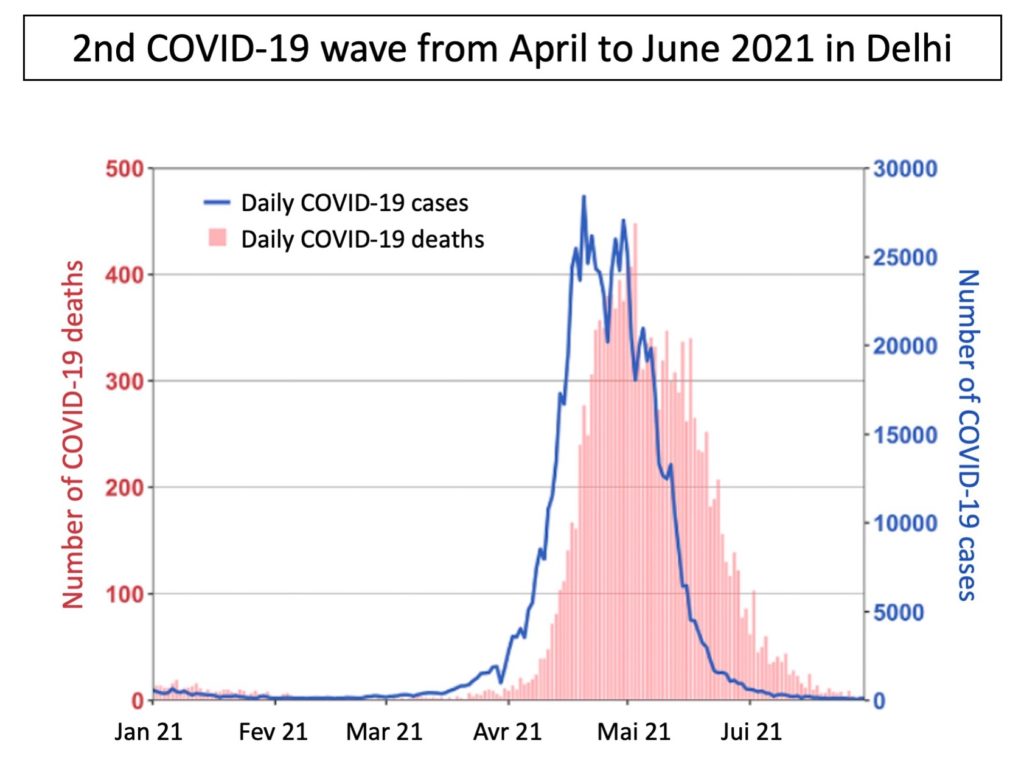