The cellular proteins necessary for infection

By disabling one gene at a time, and thereby disabling the protein encoded by this gene, it is possible to understand its role. Several teams were able to identify proteins necessary for infection with the virus.

What did we discover? The genes necessary to the biosynthesis of glycosaminoglycanes (also called GAGs) are important in the binding of SARS-CoV-2 to its ACE2 receptor. The GAGs are polysaccharides, in other words chains of sugar that we find on the cellular surface. They are charged negatively and allow, through their attraction with positive viral proteins, the recruitment of viruses near to the cellular surface.

Secondly, localized proteins in the endoplasmic reticulum (ER) and intermediate compartment between the ER and the Golgi apparatus, which are important for the virus, were identified. This suggests that these cellular structures play a role in the production of viral proteins and in the assembly of viral particles. This is the case for the RE protein, called TMEM41B, that is recognized as playing an essential role in infection by the virus of the Flaviviridae  family. For these viruses, it was shown that the TMEM41B protein could protect the viral RNA by curving the membrane of the endoplasmic reticulum, creating an ideal, protected environment for RNA replication. 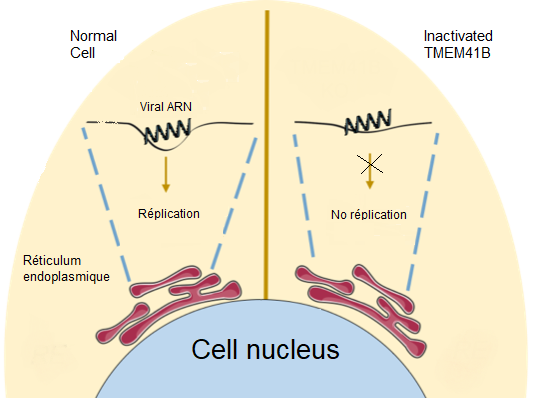 Other proteins localized at the ER level appear important for SARS-CoV-2 infection. This is true for proteins that are positively or negatively involved in cholesterol homeostasis such as SREBP, SCAP or MBTPS1/2. It was also possible to demonstrate the importance of signalling pathways in other SARS-CoV-2 mechanisms, including cellular output. For example, lysosomal exocytosis, normally used to secrete acid content out of the cell, was able to be used to eject assembled virions out of the cell. 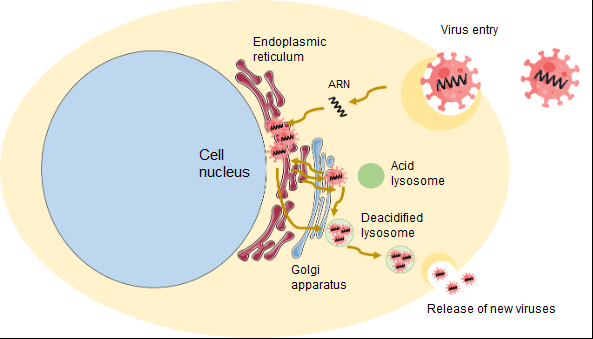 It has also been shown that, depending on the cell type, the virus can hijack different proteins to its advantage. So, in the pulmonary epithelium, SARS-CoV-2 can use a protein called TMPRS2 in the cleavage of its spike protein, necessary for its entry into the cell. TMPRS2 inhibitors will therefore prevent infection by the virus. However, in cells expressing low levels of TMPRS2, the virus may prefer another mode of penetration using endocytosis, a process by which the cell membrane will wrap round and internalize a particle.

Although research allows us to better understand the mechanisms by which SARS-CoV-2 infects cells, there is still much to learn about its life-cycle. The mechanisms of interaction between our proteins and those of the virus are still under investigation. The parallels between viruses may also allow rapid development of better drug strategies if a new pandemic arises.