The AstraZeneca vaccine could be safe and effective

Since the beginning of the pandemic, a large part of the population has avoided the virus and so remains non-immunized. A safe and effective vaccine against SARS-CoV-2 could help with controlling the illness and keeping individuals safe from severe infection. The vaccine, developed by AstraZeneca in collaboration with Oxford University, is made up of a viral vector that contains the gene encoding the SARS-CoV-2 spike surface protein.

Three clinical studies using a test group and a control group have been carried out in the United Kingdom, Brazil and South Africa. The studies were carried out between the 23rd of April and the 4th of November 2020 with a total of 23 848 participants. The participants, all at least 18 years of age, received 2 doses of the vaccine (either 2 standard doses or 1 half-dose followed by a standard dose) or of the control placebo. The time between the 2 injections differed depending on the study, with the average being 69 days.

Amongst participants having received 2 standard doses, effectiveness was at 62.1%, while in those who had received a half dose in the 1st injection, effectiveness was at 90%. This result is surprising when compared with other studies. If it is confirmed, it may turn out to be possible to use only a half-dose without compromising the vaccine’s protective capacity.

In the various sub-groups, it was observed that effectiveness varies according to age. In the 18-55 age group, it was at 59.3%. In those who received a 2nd dose of the vaccine more than 6 weeks after the 1st injection, effectiveness was at 65,4%, but at only 53.4% in those people who received the 2nd injection after less than 6 weeks. Effectiveness in persons aged over 65 was could not be evaluated, but will be studied in the future.

The vaccine’s safety was also analysed, and conclusions were positive. 175 incidents were noted during testing, in 84 people who had received the vaccine and in 91 people having received the placebo. Three of these incidents were linked to the act of vaccination itself. One of these occurred in the placebo group: the person contracted hemolytic anemia (an auto-immune illness which attacks red blood cells). In the group having received the vaccine, there was one case of transverse myelitis (inflammation of the spinal cord causing motor and sensory disorders and one case of high fever (more than 40°C) where the person recovered quickly without any ill effects. 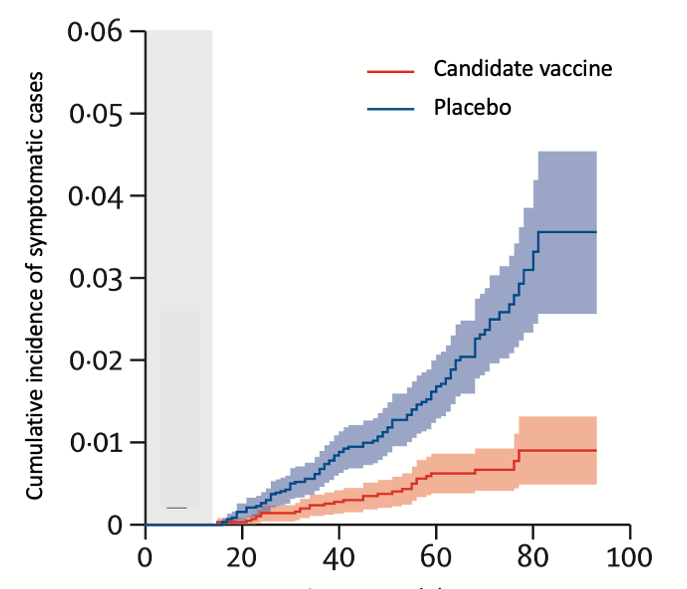 The results of these initial clinical tests on the AstraZeneca vaccine show that it is largely safe and effective: the FDA (American health authority) recommends vaccines having a minimum of 50% effectiveness. However, further studies need to be carried out on parameters such as dosage levels and the time between 2 injections, as well as effects on sub-groups such as the elderly.

Merryn Voysey and coll. Safety and efficacy of the ChAdOx1 nCoV-19 vaccine (AZD1222) against SARS-CoV-2: an interim analysis of four randomised controlled trials in Brazil, South Africa, and the UK. The Lancet, December 08, 2020.