Markers of the illness’ severity

Around 20% of COVID-19 patients suffer from respiratory failure necessitating the use of oxygen or of ventilators. In general, these patients are categorised as severely or critically ill (the latter when there is a risk of death) according to a number of clinical characteristics, such as oxygen saturation. However, it is necessary to develop approaches that enable the classification of patients before they reach this stage, in order to optimise their care and limit mortality. Researchers in China, at the Universities of Wenzhou and Westlake, have worked on detecting changes in molecular characteristics in the sera (blood with cells and clotting agents removed) of severely ill patients.

They carried out a proteomic and metabolomic study (to examine variations in the overall expression of proteins and metabolites) on a cohort of 46 COVID-19 patients (of whom 28 were severely ill) and 53 healthy individuals. Twelve classic clinical tests (blood cells, oxygen levels, glucose…) enabled the identification of severe cases with reduced levels of lymphocytes and monocytes, and with raised levels of C-reactive (CRP) and aspartate aminotransferase (AST). Using liquid chromatography followed by mass spectrometry (UPLC-MS/MS), 894 proteins and 941 metabolites were identified and quantified in each patient. Machine learning was then enacted to model 31 patients, of whom 13 were severely ill, in order to identify the latter using the protein and metabolite data base. The model singles out 22 proteins and 7 metabolites necessary for identification and was able to distinguish 2 types of patients, with a solitary error. After this ‘training”, the researchers tested their model on two supplementary cohorts of 10 and 19 COVID-19 patients. The modelling led to 6 errors in total, due to specific clinical factors: infection by hepatitis B, previous serious surgery, various other types of treatments, hypertension and diabetes.

In total, the expression of 93 proteins was deregulated in severely ill patients. The 3 major pathways concerned are the activation of the complement system (which allows the early elimination of pathogens in the absence of antibodies), macrophage functioning (related to lipid metabolism) and the secretion in the blood of platelet granules (degranulation). In addition, the expression of 204 metabolites was deregulated in these patients, of which 80 were involved in these 3 pathways. To go into detail, lipid metabolic proteins (APOA1/2, APOH, APOM, etc.), 100 lipids (especially sphingolipids) and 11 steroid hormones (including corticosterone, kynurenine, choline) associated with macrophage functions were unbalanced in severe patients. In addition, 10 proteins involved in the early stages of immune response (APP, some secreted by the liver) were abnormally expressed (SAA1/2/4, SERPINA3, SAP/APCS, CRP) and may be biomarkers of infection (excluding CRP, which already is). Other APPs were involved in the complement system (C6, CFB, CPN1, mannose). Fifteen proteins involved in platelet degranulation were under-expressed (PPBP, PF4), as well as serotonin. Many deregulated metabolites (+100) are involved in the metabolism of amino acids and derivatives, including a dozen in the metabolism of arginine alone (arginine, glutamate, urea, glutamine, N-succinate, etc.). The “molecular signatures” suggest that the liver was no longer able to detoxify (glucose, glucoronate, and bile derivatives).

Based on the expression rates of these 29 molecules, this model can therefore identify severe cases in 93.5% of cases. In this trial, 5 patients were thus identified as severe cases 1 to 4 days after the appearance of clinical signs of severity, which is promising. The catalogue of biomarkers currently used should be enlarged, based on this data, in order to improve prognosis.

But these results also indicate liver dysfunction and alteration of the complement system in severe cases. This could contribute to the cytokine storm and promote the massive recruitment of macrophages in the lungs, characteristic signs of severe or critical cases.

Lastly, this study also sheds light on potential targets for treatments and indicates that platelet blood levels should be closely monitored. For example, it suggests that complementary inhibitory therapies, as well as cholesterol (methyl-beta-cyclodextrin) or corticosterone synthesis, could be very beneficial for severe COVID-19 patients. 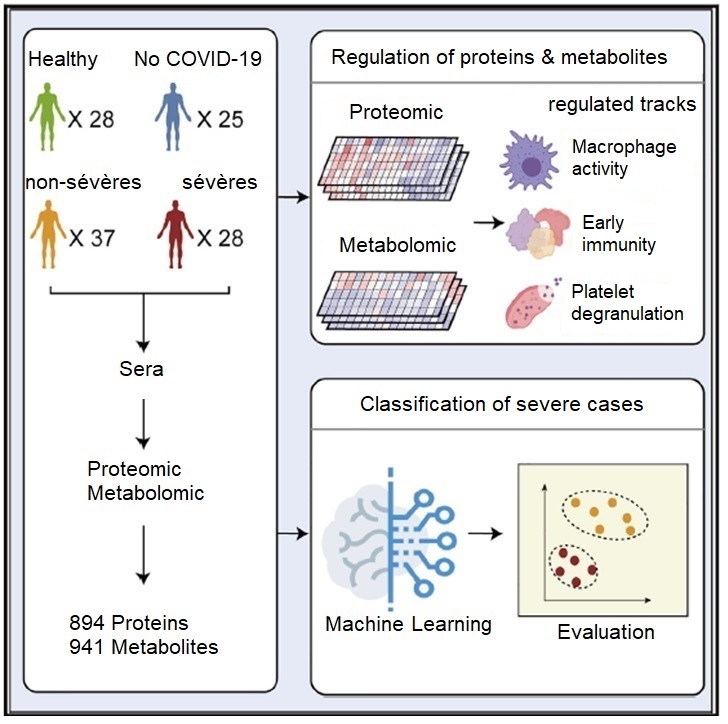