Is the United States lagging behind?

In November 2020, British scientists noticed that a growing number of COVID-19 tests, carried out independently in the county of Kent, south-east of London, contained a particular strain of SARS-CoV-2. Over the following weeks it was confirmed that this strain, the B.1.1.7, which became known as the “Kent variant” or the “UK variant”, carried several mutations that made it more transmissible and more virulent. A few weeks later, various unconnected events brought the strain to the United States. However, efforts at collecting genome data were inadequate, since only 0,43% of COVID-19 cases were sequenced and placed in public data bases. The rate of sequencing in England was estimated at 5%. Genomic surveillance, however crucial, is widely underestimated and rarely rewarded. So how could its efficiency be increased so as to detect variants? And how could it be made homogenous at a national level?

The difficulty is not to carry out more sequencing, but rather to establish a systematic programme which sequences relevant samples, links them to precise data on infections and rapidly deposits the results in public data bases. However, during a pandemic, more pressing events overtake the work of collection and publication of results. For example, the first two publications describing the arrival of the UK variant in the United States date from April 2021, by which time the strain was already dominant. In the case of avian influenza, the average time between taking the sample and depositing the sequence in the GISAID (Global Initiative On Sharing Avian Influenza Data) data base, where COVID-19 data is also stored, is 19 days in the UK as against 37 days in the States. The detection of variants by genomic surveillance is therefore very slow.

Soon after, the UK variant was joined by the South African (B.1.351) and Brazilian (P.1) variants. This latter variant is capable of re-infecting patients and has established itself in Florida, Illinois and Massachusetts. Other variants continue to emerge, including the B.1.427, B.1.429 and B.1.526 variants, that are considered to be “of concern” by the Center for Disease Control (CDC), as the B.1.1.7 UK variant was previously. Recently a new variant has emerged in Angola, very different from those we already know.

At the same time as we deploy vaccines against SARS-CoV-2, we need to keep an eye on its development. Genomic surveillance may not be the most glamorous of the scientific domains, but it is indispensable in order to follow the pandemic’s evolution in real time. It needs to be financially supported in all countries. On the 16th of April 2021, the White House announced that it would invest 1,7 billion dollars into genomic epidemiology, which should allow the programme to be optimised and shortcomings dealt with. 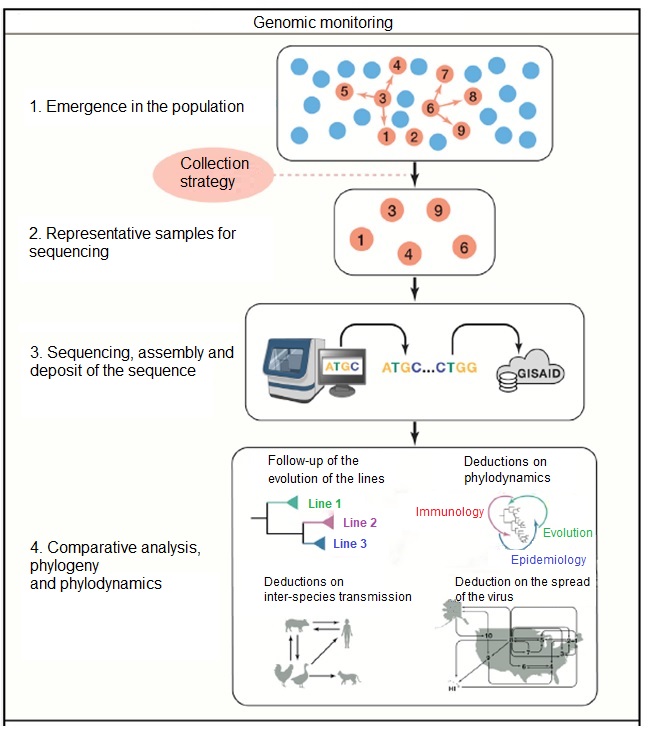