In general, evolution enables pathogens, whether viral or bacterial, to acquire resistance to antimicrobials. SARS-CoV-2 is no exception to this principle. Emerging variants, such as the Alpha (UK), Beta (South African) or Delta (Indian) variants, seem to be more transmissible or more resistant to antibodies generated by previous infection or by vaccination.

In order to self-replicate, the virus has a genome that serves as a matrix for the manufacture of its proteins. The cellular machinery of the infected organism is hijacked so that it prioritises viral proteins and thus produces numerous new virions. For many years now we have made use of modified viruses (interfering viruses). Initially they were used as tools to study pathogens in vitro, then they were used as treatment for infection against different viruses. These modified viruses do not have a complete genome and thus have no pathogenic capacities.

How do they work? They enter into competition with the virus which has caused the illness (SARS-CoV-2, for example) since the cellular machinery becomes occupied by assembling interfering viral proteins and is therefore unable to produce pathogenic viral proteins.

In this article, scientists constructed candidate interfering viruses to treat SARS-CoV-2 and tested in vitro and in vivo, in an animal model. Researchers at the Gladstone Institutes (San Francisco, USA) firstly determined, using computer modelling, whether it was conceivable for an interfering virus to reduce the viral load of SARS-CoV-2. Analyses demonstrated that it would be effective in suppressing the SARS-CoV-2 viral load after a single administration.

The scientists therefore used molecular biology to create several candidate interfering viruses in vitro. In order to evaluate their effects, they carried out cell culture testing and thereby confirmed their inhibiting activity on SARS-CoV-2. The capacities of the candidate interfering viruses were also tested on another cellular model: lung organoids. Organoids are three-dimensional structures made up of cells that reproduce the anatomy of an organ. Analysis showed that the interfering virus did not restrict SARS-CoV-2’s entry into the cell, or the initial phases of its activity, but rather the replication of its genome and the assembly of the virion.

Why is this the case? RNA viruses, such as SARS-CoV-2, evolve quickly and may adapt to the interfering virus, thereby escaping the competition for producing proteins. But the interfering viruses compete with SARS-CoV-2 on highly conserved proteins, regions where there are few mutations, and therefore the virus cannot easily become resistant to this treatment.

Finally, the researchers evaluated the efficacy of interfering viruses in vivo, on an animal model of hamsters susceptible to SARS-CoV-2 infection. The interfering viruses were administered by intranasal route. The tests gave good results in both prevention and treatment: the interfering viruses enabled both the viral load and the inflammation in the hamsters’ lungs to be reduced drastically and lastingly, thereby limiting lung disease.

If this treatment could be developed and approved for human use, it would be highly effective in just one dose, with few risks of resistance. However, more work needs to be done on the development and testing of interfering viruses in humans since the hamster must be considered as an imperfect model. 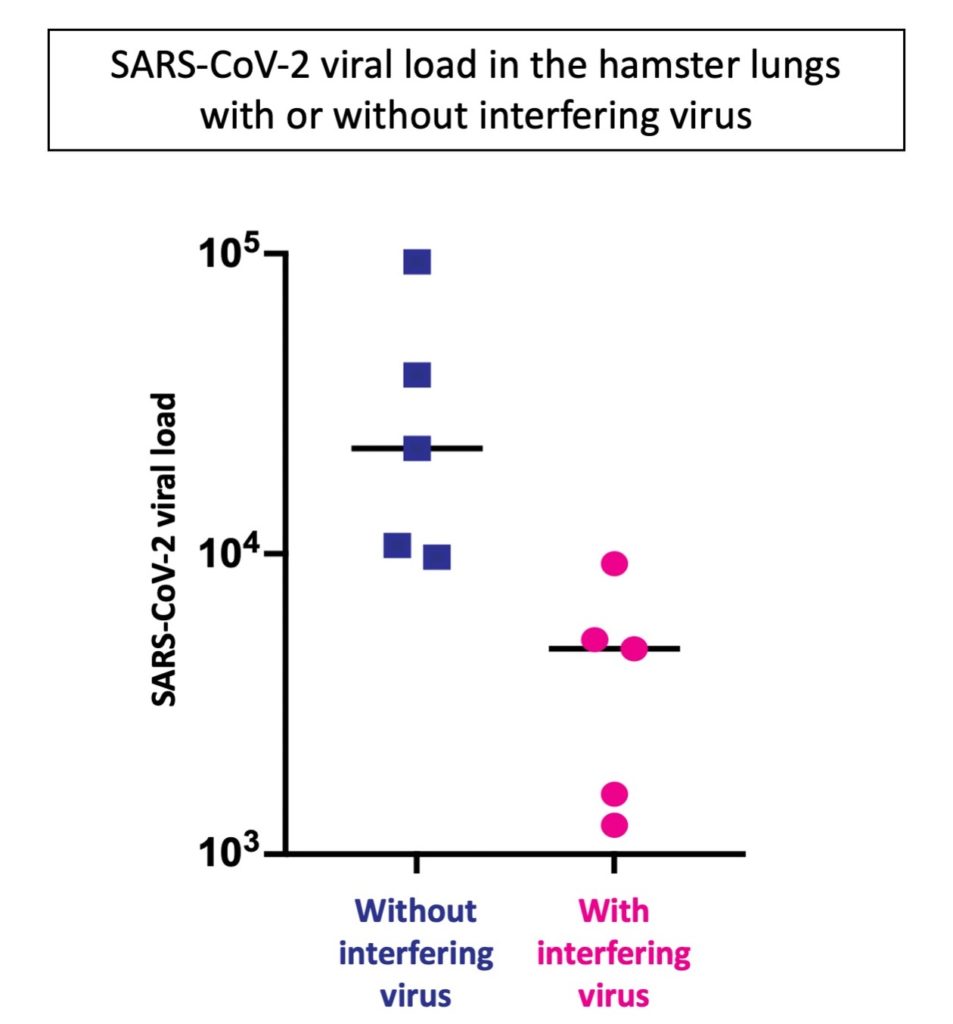