A modified poliovirus to treat COVID-19?

RNA viruses are a clear threat to world health, regularly causing epidemics: these include the AIDS virus, the flu virus, Dengue fever, Zika, and of course SARS-CoV-2, responsible for COVID-19. Despite the development of vaccines, the virus continues to circulate, leading to the regular emergence of variants. We therefore need effective treatments against current and future variants.

The human body has a natural immune system which is capable of stopping or limiting infection caused by pathogens. The first line of defence is the innate immune system, which triggers the production of messengers (cytokines) that enable the recruitment of immune cells. The innate response is fast and not specific to any particular pathogen. It comes before the adaptive response, which is slower but more precise. Vaccination helps the adaptive immune response against a specific pathogen. Another possibility of treatment would be to help the innate immune response. However, medicines that increase this response, such as pro-inflammatory molecules like interferon, often come with numerous harmful side effects.

Researchers in San Francisco (at the University of California) have tested the hypothesis that a non-pathogenic virus, recognised by the immune system, could activate the innate response and could therefore be effective against a range of viral infections, without any side-effects. This hypothesis derives from the observation that the administration of an attenuated, and therefore non-pathogenic, version of the polio virus, not only protects against polio infection, but also against flu. The researchers developed a defective form of the polio virus, that is, a virus with an incomplete genome. Defective viruses can infect cells, but cannot spread from cell to cell. Infection by these modified viruses therefore remains limited to a restricted number of cells at the administration site.

The researchers firstly verified in vitro that this artificial virus protects against poliovirus infection, as well as against other viruses, such as influenza and SARS-CoV-2. It enables infection by these different viruses to be reduced by between 100 to 1 000 times.

They then tested in vivo on mice to reduce severe forms of these infections. The treatment can be used pre- or post-exposure to the pathogenic virus, by intraperitoneal or intranasal administration. For SARS-CoV-2 in particular, this treatment reduces viral replication and prevents symptoms of the illness. In addition, the protection engendered by the defective viruses for the mice seemed to be long-term and without side-effects. This treatment is non-pathogenic, can be administered in a non-invasive way, and does not appear to induce resistance to the treatment. Viral mutations do not make viruses resistant to this therapy since the treatment reinforces the multicomponent innate immune response.

This modified virus would therefore be a good alternative to conventional anti-virals and to therapeutic antibodies to which RNA viruses, due to the plasticity of their genomes, become resistant over time. Complementary studies are necessary so as to better characterise its effectiveness and any undesirable side-effects in humans. 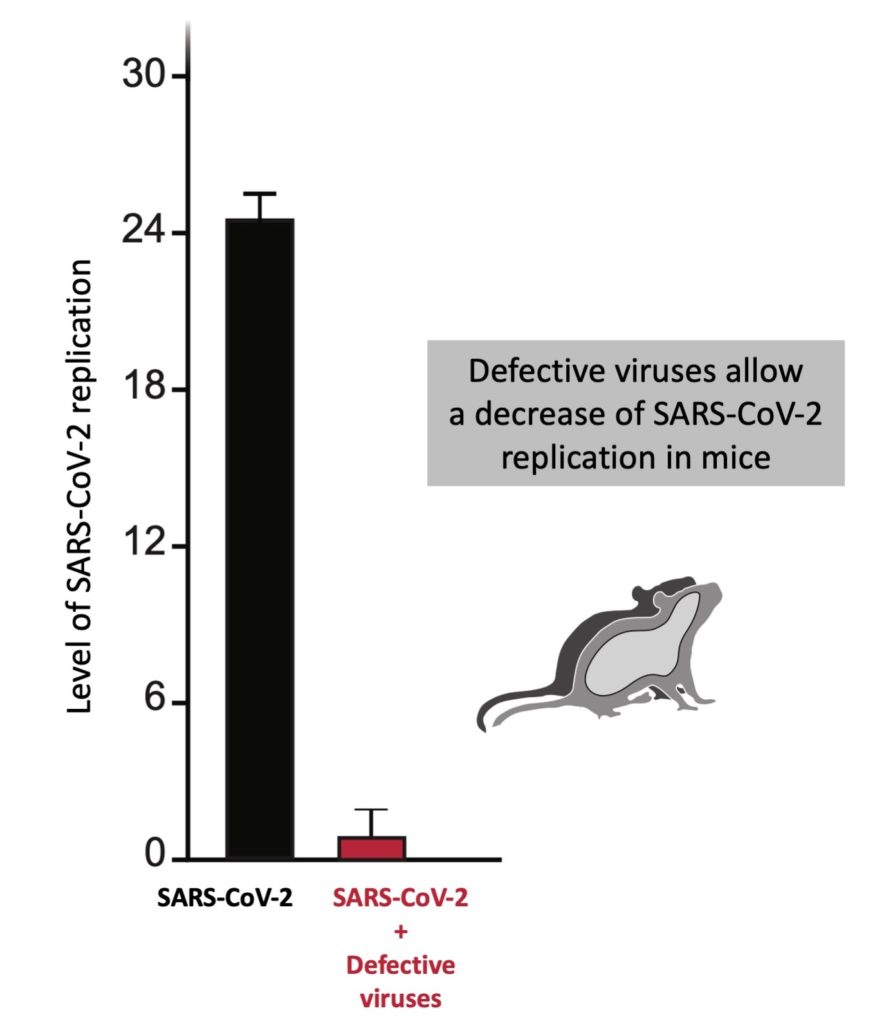