How the spike divides itself to strengthen the virus

SARS-CoV-2 can lead to serious respiratory illness and death, but its ability to spread asymptomatically sets it apart from SARS-CoV-1 and MERS-CoV. In the latter, when these viruses enter the target cell, the spike protein interacts with the ACE2 cellular receptor. But the SARS-CoV-2 spike is more refined in its approach to ACE2 than that of SARS-CoV-1. In SARS-CoV-2 and MERS-CoV, the spike undergoes cleavage (maturation stopped) by furine (an enzyme important in the process of maturation of albumin or insulin), in order to optimise binding. This specificity has probably contributed to the emergence of this phenomenom in humans. The mechanism is also exploited by other viruses such as flu or HIV.

To increase understanding of this enzyme’s role in the COVID-19 pandemic, American researchers at Galveston, University of Texas recreated an entire SARS-CoV-2 virus from its sequence (inverse genetics). They removed the spike’s capacity for furine cleavage by introducing mutations. The viral replication of this mutant was 25 times greater than that of the naturally occurring, non-mutated virus in Vero E6 cells from monkey kidneys, a model often used in the study of this virus. In these cells, cleavage in the mutant was greatly lessened, though not completely eliminated, indicating that enzymes other than furine are able to cleave the spike.

However, mutant virus replication is reduced 10-fold in human respiratory cells. The researchers showed that this alternative cleavage is carried out by TMPRSS2, an enzyme expressed in the cellular membrane whose functions are little understood. Human respiratory cells express this enzyme more than the Vero E6 cells, and when this enzyme is artificially over-abundant in cells, the mutant replicates like the naturally occurring virus. TMPRSS2 therefore has an effect on viral entry. 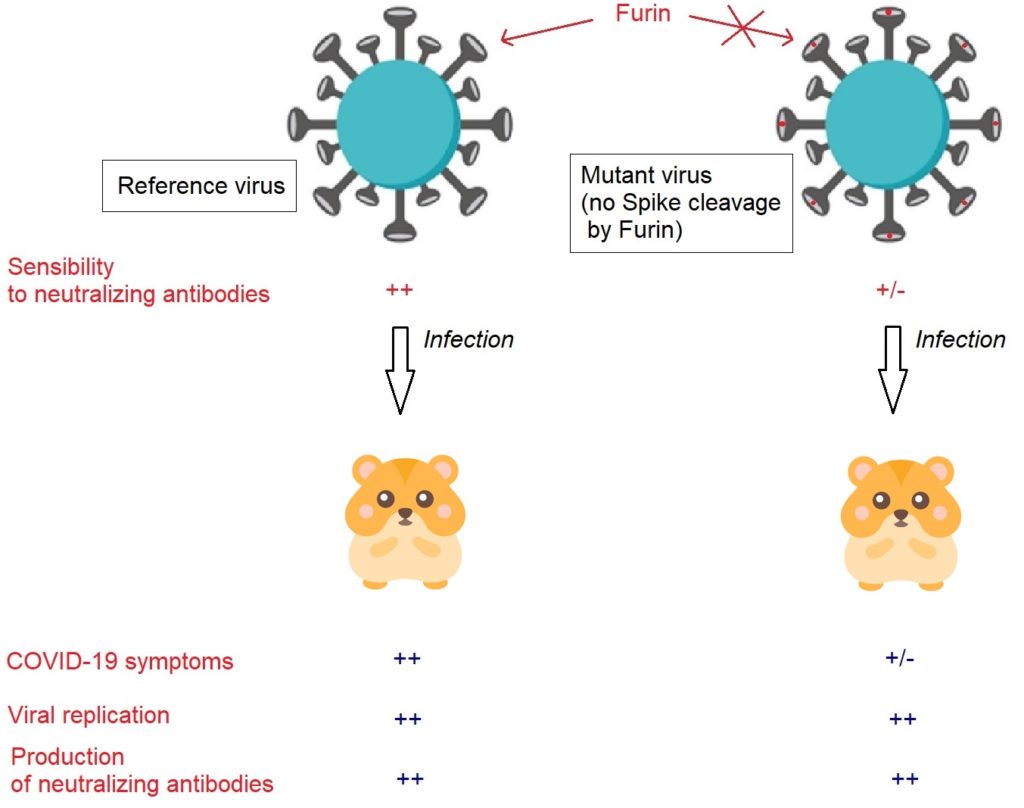 The researchers then validated these observations using transgenic mice expressing human ACE2: the mice infected with the mutant virus developed fewer symptoms. Using in vitro tests carried out with serum from 17 recovering COVID-19 patients, they showed that the mutant is less responsive to neutralizing antibodies. Using electronic microscopy, they also noted that the mutant viruses form “clusters”, which may explain why certain viruses are not detectable to antibodies, leading to the possibility of evasion.

Cleavage by furin has, therefore, a major impact on the capacities for infection and the pathogenicity of SARS-CoV-2. When stocks of natural viruses are produced in laboratories, TMPRSS2 can be used in conjunction with Vero E6 cells to reduce the risk of a mutant appearing and taking advantage.

This may also have implications for the production of live attenuated vaccines if they are produced in Vero E6 cells. The mutant reduces severity of the illness and protects from re-infection, making it a promising potential vaccine.

However vaccines are mainly evaluated according to their capacity to stimulate the production of neutralizing antibodies, and we have seen that mutant viruses are less susceptible in this regard.

We should therefore aim to deepen our understanding of immune responses and be extremely cautious before opting for this vaccine strategy. These results may also be significant in the context of other coronaviruses, since natural mutations may modulate the spike cleavage and so change the epidemic’s trajectory.