How the Alpha variant has spread in the UK?

The Alpha (⍺) or UK variant emerged in England at the end of 2020 and spread rapidly throughout the country. By the 19 January 2021, this variant had reached all 4 countries of the UK. Despite travel restrictions, it then became dominant throughout the world. Studies have shown that this variant has higher transmissibility and pathogenicity than preceding strains. British researchers (at the University of Oxford and University of Edinburgh) reconstructed the geographical dynamics of the Alpha variant and analysed how human mobility may have contributed to the start of epidemic spread.

The researchers analysed data on human mobility, SARS-CoV-2 genome sequences and PCR tests in the UK. They were thus able to reconstruct the spread of the Alpha variant using phylogeographic analysis. The variant was detected for the first time in Kent (to the south-east of London) on the 20th September 2020. The researchers observed that in each region, the date of the variant’s first appearance correlated to travel from Kent or from London.

They were thus able to establish several phases of the variant’s propagation :

This 2nd phase stabilised in the middle of December 2020, when strict public health restrictions were put in place by the government (closure of non-essential businesses, limitations of gatherings of people…). The researchers were not, however, able to establish a direct link between the implementation of these measures and slowing of the variant’s spread.

We now know that the Alpha variant emerged at a precise geographical location (identified retrospectively) and developed in the main from there. The particularly rapid spread of this variant was due to its high transmissibility and human mobility before, during and after the 2nd lockdown. These results remind us of the significant role of mobility in viral propagation at both national and international levels. 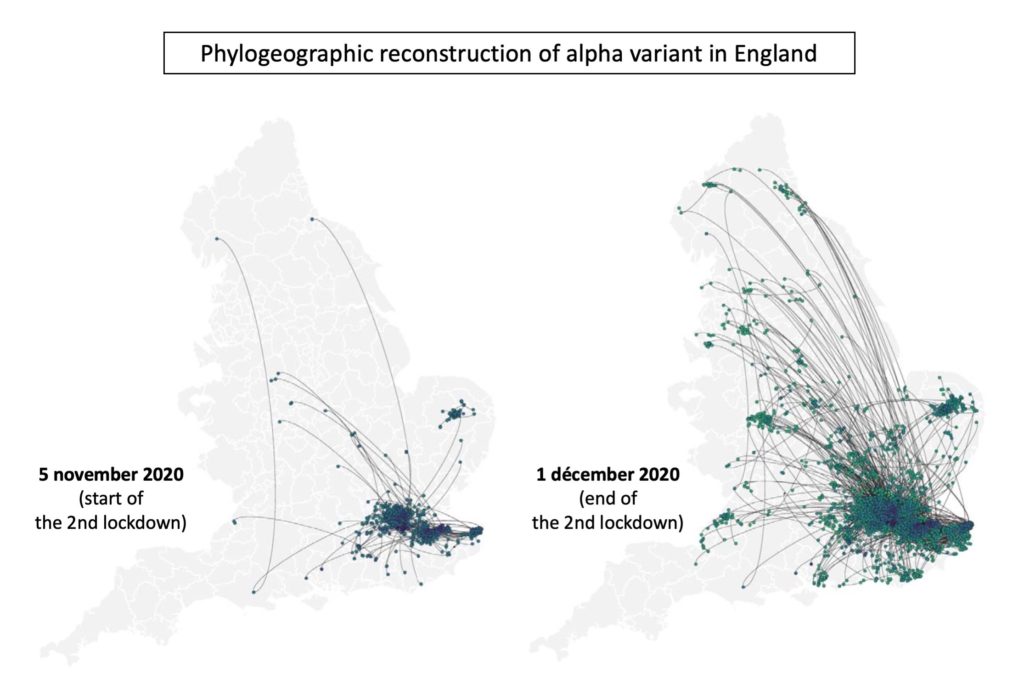