How do we make antibodies still more effective?

Antibodies that attach themselves effectively to their target have a major importance in biomedical research and in medicine. We can speak of affinity (more or less strong binding) and of specificity of the target site. This perspective is interesting not only for pathologies such as cancer, but also against COVID-19.

This effectiveness can be enhanced when these antibodies are multivalent, that is, grouped together in order to create an entity with more than two binding sites on its target: we speak of enhanced “avidity”. For example, IgA antibodies (protection of the mucous membranes) generally adopt a pentameric form, thanks to the J chain that joins them naturally to one another. Fixing several receptors together at the same time in one cell can increase signalling and its effects, since sometimes these receptors need to oligomerize (associate with several others) to trigger a response. In a laboratory situation, several methods are used to join antibodies together: genetic engineering or merging them into polymers. These methods are often laborious and control of the geometry and composition of the entity is limited.

How can these procedures be improved with a view to treating different pathologies such as COVID-19? Researchers at the University of Washington have developed proteins capable of assembling antibodies in symmetrical structures that are ordered and clearly defined. Modelled on computers, these proteins form blocks that bind the antibodies together with a cyclical symmetry, thus forming « antibody cages » (AbC). Three types of proteins are necessary: one binds the Fc parts of the antibodies (based on protein A), a helical connector assembles the various parts, and cyclic modules form oligomers that organize the symmetry. The computer design takes into account all the geometric constraints of the proteins to arrive at 4 types of assembly: dihedral (D2), tetrahedral (T32), octahedral (O32 and O42) and icosahedral (I32 or I52), classifications that describe the chosen geometry.

The researchers firstly selected 48 proteins of which each component part had been produced in a bacterial system and then purified by chromatography. In the end, 8 of these AbCs were retained: they were found capable of auto-assembling in a solution (3 D2, 2 T32, 1 O42, 2 I52). In order to verify this, they were characterised by electron microscopy, then analysed by computer reconstruction. The stability of the AbCs was evaluated by Dynamic Light Scattering (DLS) and by conventional biochemical methods, over 4 weeks, at room temperature.

Before considering using this discovery against a disease like COVID-19, the researchers conducted its biological characterization in a tumour cell environment. They then built AbC with antibodies directed against selected receptors and evaluated the effects of each geometry on signalling efficiency. An initial test was carried out by forming 5 AbCs of different geometries with anti-DR5 (Death Receptor 5) antibodies. This receptor is overexpressed in many tumours, and triggers cell death by apoptosis (caspase 3/7 pathway), making it a promising therapeutic target. In resistant colorectal tumour or renal carcinoma cells, AbC causes death even at low concentrations via more effective signalling, unlike with antibodies used alone or AbC compounds of a non-specific antibody. The researchers validated the effectiveness of this method on other immune cell receptors: the angiopoietin-1 receptor (tissue repair and inflammation), CD40 (activation of B lymphocytes), and CD3/28 (stimulation of T lymphocytes). Certain geometries proved more effective than others. 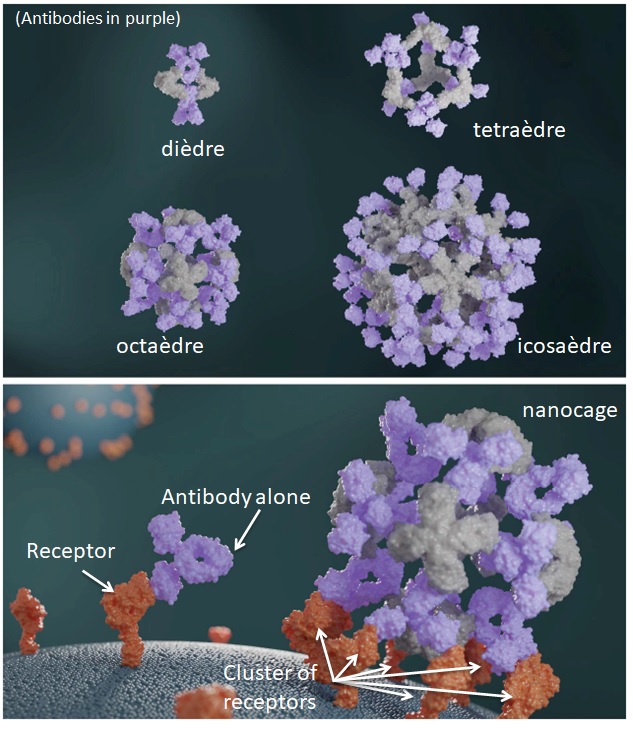 Finally, the researchers attempted to enhance the neutralization capacities of anti-SARS-CoV-2 antibodies (CV1 and CV30) by increasing their avidity for the virus. In octahedral form, the AbCs neutralize the virus in vitro up to 200 times more effectively than the antibody alone at the same concentration. In the same form, AbC compounds of ACE2 (the virus receptor that binds with the spike) neutralize the virus 7 times more efficiently that the receptor on its own.

This innovative and promising nanocage design integrates the structure and the function of antibodies, with greater effectiveness than previous approaches. Many geometries and orientations are feasible and this modularity widens the field of possibilities. In addition, their synthesis is achieved more quickly and more easily. Several different antibodies can even be integrated into a single AbC. They could also be used to deliver nucleic acids (cf RNA vaccination) or proteins to cells.

The research team is currently working on animal models to evaluate the pharmacokinetics, the biodistribution and the immunogenicity of AbC.