How do messenger RNA vaccines work ?

The COVID-19 epidemic – caused by the SARS-CoV-2 virus – began in China but spread rapidly. On the 20 January 2021, there were more than 96 million infected people worldwide, with more than 2 million deaths. The successful development of vaccines has been extremely quick. The first documented case of COVID-19 dates from the 1st of December 2019 in China; the genome of this new virus was sequenced from the 10th of January 2020, and clinical tests of the 1st vaccine began on the 16th of March. The American authorities authorized the 1st vaccine to be marketed in December 2020, just one year after the discovery of the virus.

The first 2 vaccines that proved to be effective in preventing symptoms of the illness were the Pfizer-BioNtech and Moderna vaccines. They are based on messenger RNA technology (mRNA) and are delivered by 2 injections given at an interval of 3 to 4 weeks. They were tested on a total of 74 000 participants and have up to 95% efficiency compared to a placebo.

But how do these vaccines work? An mRNA is a copy of a part of the genome (gene set) used as a template for the production of a protein. The ribosomes, which make proteins, are located in the cytoplasm of the cell. The genome is protected in the nucleus. It is the mRNAs, copies of genes, that are used as moulds to produce proteins. These mRNAs are transient because they are very fragile, and are incapable of modifying the genome. The principle of an mRNA vaccine is to prompt the body’s cells to manufacture the viral antigen, instead of injecting it directly. In the case of mRNA vaccines against SARS-CoV-2, the mRNA fragment of the virus enabling production of the spike surface protein is injected into the organism. This mRNA is contained within a lipid particle so as to be protected and be able to penetrate cells. Once the spike protein has been produced, it appears on the surface of the cellular membrane and is recognized by the immune system. This latter will then produce antibodies targeting this viral protein and develop memory cells, ensuring the vaccine will be effective over the long term. 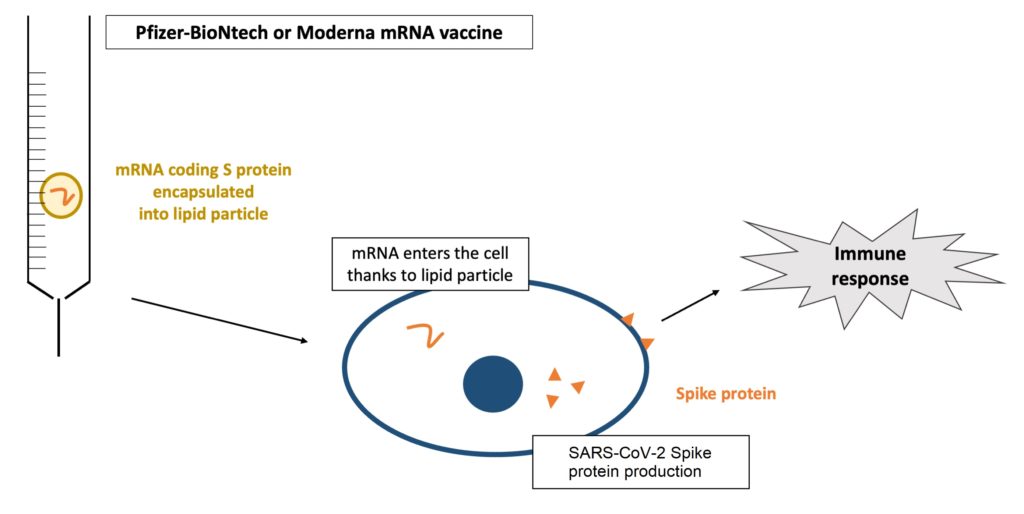