How convergence strengthens the virus

At the beginning of the pandemic, SARS-CoV-2 infected people who had never met with any kind of similar virus, and who therefore had no antibodies adapted to the situation. It then became more transmissible due to the rapid appearance of the D416G mutation (in the spike) and the P323L mutation (in the polymerase).

A year later, 3 lineages had emerged at the same time on different continents, having the 501Y mutation in common: Alpha (B.1.1.7), Beta (B.1.351), and Gamma (P.1). However, these lineages converged towards certain adaptive mutations that altered the properties of the virus, such as the deletion of 3 amino acids in the nsp6 protein that seems to decrease the sensitivity to interferons, or E484K, K417T and L18F in the spike that alter its transmissibility and its ability to escape neutralizing antibodies. Depending on the combination, the effects of these 5 mutations were either amplified or negated. But how did other convergent mutations appear?

American and South African researchers (at the Universities of Temple, Washington and KwaZulu-Natal) carried out a phylogenetic study on the Alpha, Beta and Gamma lineages (using the GISAID data base) to evaluate the frequency of mutation appearance over time, but also to identify those mutations that had contributed to the adaptation of SARS-CoV-2.

Finally, the authors describe a “meta-signature” of convergence, regrouping in total 35 sites (19 of them in the spike) for the 3 lineages. Before March 2021, the Alpha lineage carried 10 mutations included in this signature, while Beta carried 13 and Gamma 11. By June 2021, the 3 lineages had accumulated 3 supplementary common mutations that were included in this signature. Some lineages other than 501Y (B.1.620, B.1.621, B.1.526) are now beginning to accumulate mutations included in this meta-signature. For example, the B.1.620 lineage (Lithuania), not considered to be a variant of concern, carries 10 mutations in the signature, suggesting that it is in the process of evolving towards a viral form equivalent to the 501Y lineages.

The 501Y lineage continues to evolve, and will probably reach global convergence; eventually, a variant will carry specific mutations on each of the 35 sites of the meta-signature, giving it an optimal viral form (replication, transmissibility, maximum escape capacity). This could represent a much more serious problem than those variants we currently know about. The authors underline, however, that several in vitro approaches could help us to evaluate the danger it poses, as well as giving us time to prepare for it. 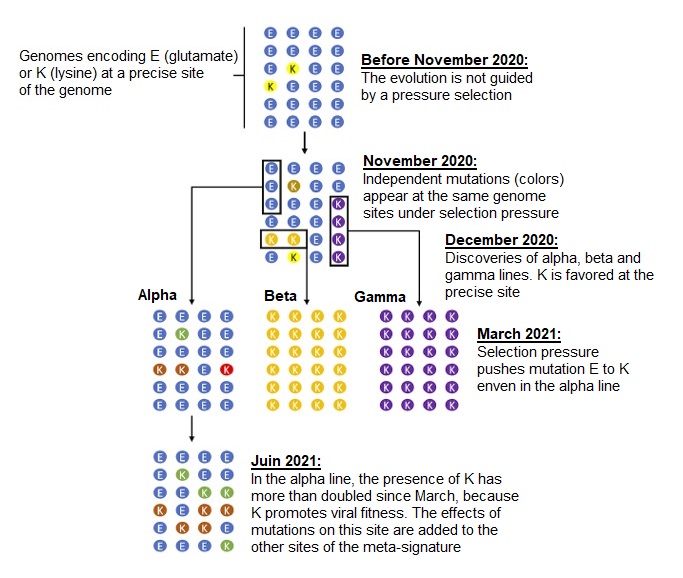