Since the beginning of the COVID-19 pandemic, a number of variants of SARS-CoV-2 have appeared. Amongst them are variants of concern, (VOC), which have acquired several biological advantages: better transmissibility, increased virulence, resistance to neutralising antibodies acquired through vaccination or by natural infection, and the ability to evade treatments and some detection methods. These properties can be explained by mutations appearing in the spike protein, which governs viral entry into the host cell by interacting with the human ACE2 receptor.

The spike is made up of the S1 and S2 sub-units. S1 is itself composed of the RBD (receptor binding domain), the NTD (N-terminal domain) and the SD1 and SD2 sub-domains. The RBD oscillates between open states (where interaction with the ACE2 is possible) and closed states (no interaction). The S2, which is invariable, is composed of the FP (fusion peptide), HR1/2 (heptad repeat), CH (central helix), TM (transmembrane), and CT (C-terminal)  sub-domains. The natural state of the spike is in a trimeric form (an assemblage of 3 spike protomers). During infection, it undergoes numerous structural changes since several of these domains can interact between themselves.

Three mutations of the RBD, which is the principal target of neutralising antibodies, have interested scientists. The Gamma (g) or Brazilian variant and the Beta (b) or South African variant carry the mutations K417N (K417T for Gamma), E484K and N501Y. The Alpha (a) or UK variant carries the N501Y mutation and a deletion (DFVI), which appeared in a strain in Holland responsible for transmission from human to mink and back to human (detected elsewhere later). Although these VOC appeared in different locations and carry different mutations, they seem to have evolved towards common attributes.

American researchers at Duke University have tried to better understand the changes that these mutations cause in the spike’s structure. They combined structural and biochemical approaches along with computer modelling  to characterise the properties of the 19 spike proteins carrying different combinations of mutations.

In all the variants, better transmissibility is underpinned by the RBDs greater capacity in the open position, but also by the mutations in the RBD that increase affinity for the receptor. In the Dutch variant, better affinity for the ACE2 was initially provided by Y453F, which enabled it to change host. But other mutations cause instability, due to bad positioning of the S1 sub-unit of one of the spike chains within the trimer, leading to it being exposed prematurely. In the Alpha variant, contact between the SD1 and HR1 regions enable an increase in the proportion of time the RBD remains in an open state, underlining the importance of mutations in distal regions (on both sides of the spike). Certain mutations destabilise the protein (T716I, S982A) while others stabilise it D1118H, A570D), preventing the premature exposure of S1. In the Gamma and Beta variants, it is the RBD-RBD interactions that increase the proportion of open RBD. The E484K mutation destabilises the spike but helps it evade neutralising antibodies targeting the RBD. Mutations in the RBD can modify interaction between protomers, while other distal mutations may modulate these effects.

This work confirms numerous other data already cited in the scientific literature, but using a structural approach. It shows in detail how the mutations present in VOC modify the spike’s structure by revealing a network of interactions between domains, notably between different  protomers. By using different mechanisms, these mutations make it possible to control the arrangement of RBD in an open position, giving the different VOC common abilities in transmission and evasion. These results can serve as a basis for anticipating future changes in SARS-CoV-2. 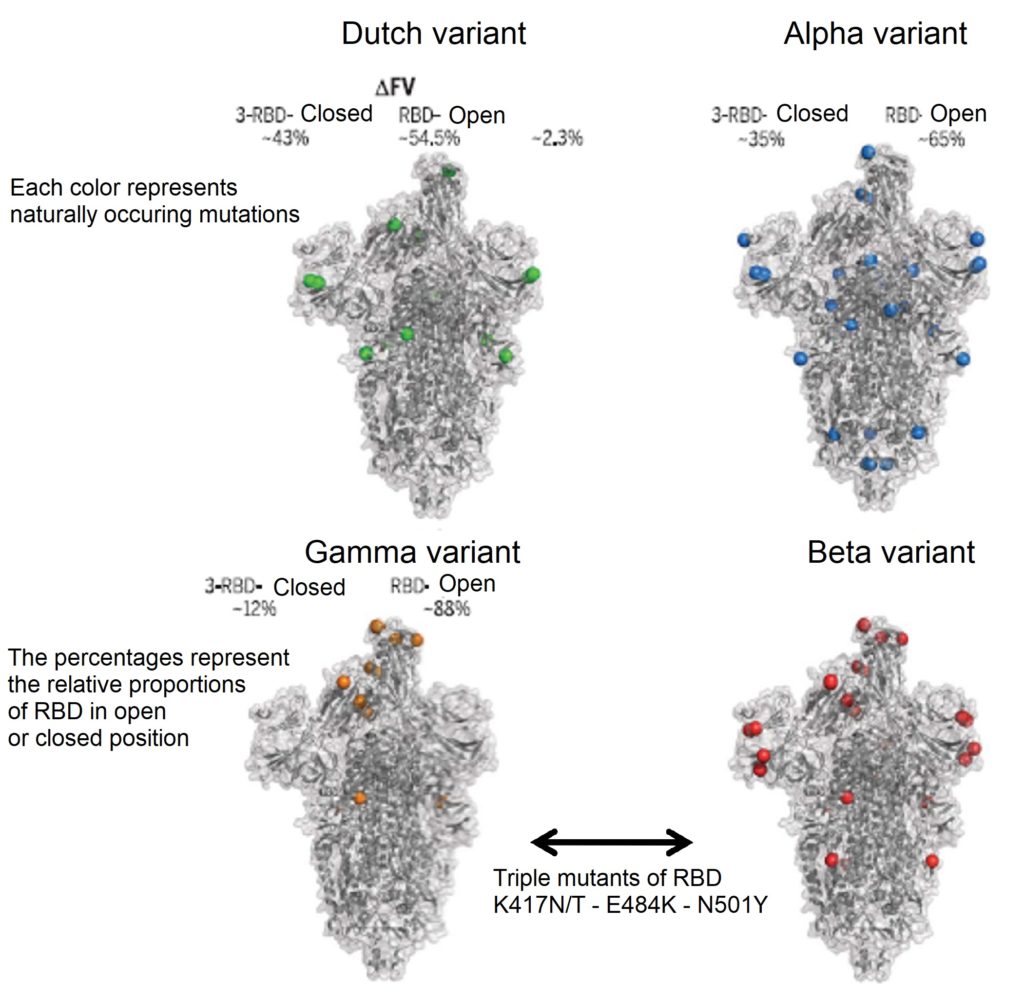