Could the new British variant be more dangerous?

A new variant coming from the United Kingdom has just been discovered. This new strain of the virus has 17 mutations, of which the most important is situated in position 501 of the spike protein (N501Y, where the asparagine amino acid is replaced by a tyrosine amino acid). In principle this mutation allows SARS-CoV-2 to enter into cells more easily, thereby making it more contagious. However, this variant does not appear to be more virulent.

Since the beginning of the epidemic, other variants have already been discovered. This virus, like many others, commits “errors” in replicating its genome. Some of these errors give it a selective advantage (for example, more efficient entry into the cell or better replication), and the viruses carrying this type of mutation can quickly become dominant. Other mutations that do not work to the virus’ advantage disappear quickly.

A variant that was discovered earlier, during the summer of 2020, was that carrying the mutation D614G (where the aspartic amino acid is modified to glycine in position 614), a mutation also situated in the spike protein.

Why are these mutations in the spike protein observed with such great interest? Because the spike protein allows the attachment and the entry of the virus into the cell and is therefore the principal target for vaccines developed against COVID-19. The viral strain carrying the D614G mutation, which appeared during the summer of 2020, was studied since it quickly became the majority strain worldwide. Vaccine research began as early as January 2020, as soon as the first sequences of the virus genome become available. Currently, at least 30 potential vaccines have begun clinical testing and most of them are not based on the variant carrying this mutation. The key question therefore is whether this mutation (variant G614) allows the virus to escape neutralization by antibodies produced against the spike protein (viral antigen) that don’t possess this mutation (variant D614).

To investigate this question, a study was carried out using mice and macaques that were immunized with an RNA vaccine, which allows the cells to produce the spike protein, so that neutralizing antibodies directed against this protein are developed by the body. The serum containing the antibodies of the mice or the macaques was recovered and used to perform neutralization tests on 2 types of pseudoviruses (harmless viruses made in laboratories and carrying spike proteins): those carrying the original spike protein (D614) and the mutants (G614).

The result was that the mutant pseudoviruses (G614) from the summer of 2020 were neutralized more effectively that the original virus (D614). In addition, the neutralisation of these 2 types of pseudovirus was tested with serum from patients having been infected by one or other of the D614 or G614 variants. The mutated variant G614 was also neutralized more effectively that the original variant.

In order to try to explain this more efficient neutralization of the G614 variant by neutralizing antibodies (including those directed against the D614 variant), researchers looked at the differences in the structure of the spike protein between 2 variants, using an electronic microscope. They were able to show that the mutation caused a change in confirmation in the protein and increased exposure to neutralizing antibodies. 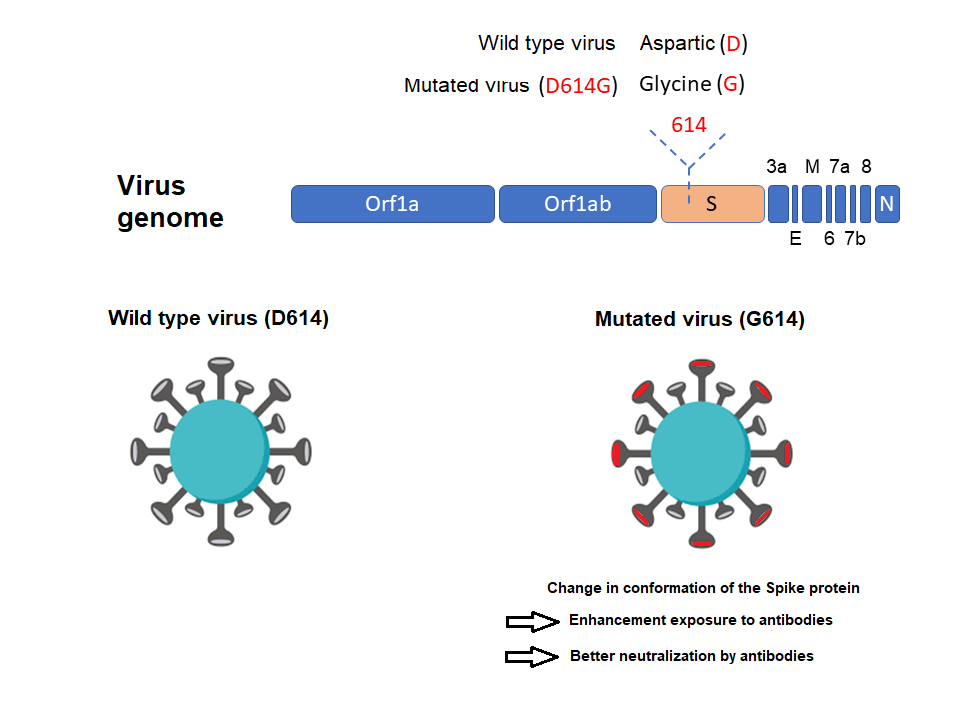 But what about the new English variant that appeared in December 2020? Today very little information is available. Studies are being carried out and are necessary to confirm that, for example, developed vaccines will protect us against this new variant.