Can domestic animals be infected ?

The SARS-CoV-2 virus had its origin in animals, from where it was transmitted to humans, and this quickly led to the pandemic. The transmission of the virus is principally human-to-human, but it may be transmitted to certain animals, particularly domestic ones. Sporadic cases of dogs and cats being infected have been reported: some dogs have proved fairly resistant to the virus whereas cats may develop respiratory illnesses with a heavy viral load. Recently, from March to May 2020, research was carried out to survey the epidemiological characteristics of cats and dogs living in different parts of Italy. In total, samples were taken from 603 dogs and 316 cats. PCR tests (to analyse the presence of the virus at the moment the sample is taken) and serological tests (to analyse antibodies developed against the virus, which are markers to indicate previous infection) were carried out on animals classed in 3 categories according to their environment: living in a household infected by SARS-CoV-2; in a household with suspected infection; or in a non-infected household. All the animals tested by RT-PCR were negative, which indicates that the virus was absent at the time of testing. The second type of analysis, testing for neutralizing anti-SARS-CoV-2 antibodies, showed positive results in 3,3% of dogs and 5,8% of cats, indicative of past infection. More precisely, of those living in infected  households, 12,8% of dogs and 4,5% of cats had developed neutralizing antibodies. 14,3% of dogs and 0% of cats (but in a sample of only 3 cats) living in a household with suspected infection had developed neutralizing antibodies. Finally, amongst those animals living in non-infected households, 1,5% of dogs and 2,6% of cats had generated antibodies.

The results are shown in the following diagram: 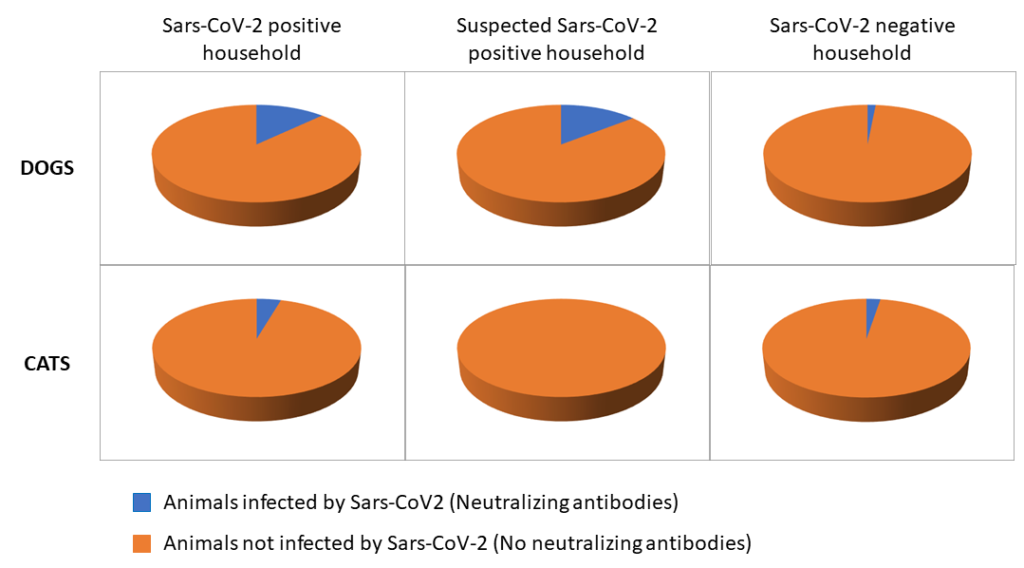 The link between households infected by SARS-CoV-2 and the presence of neutralizing antibodies (indicating past infection) is clear only in dogs. This contrasts with the first experimental studies that showed  cats were more vulnerable to the virus than dogs. This discrepancy may be explained by the fact that generally, there is greater interaction between humans and dogs than humans and cats. It should also be noted that no young animals (of less than 1 year old) possessed antibodies directed against SARS-CoV-2, indicating that they had not been infected. In addition, the RT-PCR showed negative in all the animals tested, even in those with neutralizing antibodies. This may suggest that they are virus-free after a short time.

In conclusion, the percentage of animals having generated antibodies targeting the virus shows that infections are rare. However we don’t know at the current time if domestic animals play a significant role in the spreading of the SARS-CoV-2 epidemic.

Evidence of exposure to SARS-CoV-2 in cats and dogs from households in Italy. E. I. Patterson and coll. Nature Communications volume 11, Article number: 6231 (2020).