The SARS-CoV-2 genome codes for 2 polyproteins, 4 structural proteins (including the spike) and other accessory proteins. The viral protease Mpro has the function of splitting the polyprotein into individual proteins and has a central role in the virus cycle. Since Mpro  has no equivalent in humans, it is an excellent choice for targeting by therapeutic treatments, since side-effects should be relatively limited. Certain protease inhibitors are currently being developed (Pfizer, phase 1), but there is a severe lack of antivirals to treat the successive waves of infections. Chinese researchers at Sichuan University and at the Kumming Institute of Zoology have developed compounds that target Mpro and which for the first time have proved their effectiveness as antivirals in  in vivo trials.

Using known structural data from Mpro, obtained by crystallography, they studied its active site, which generally accommodates 4 recurrent protein fragments (P1 to P4), in detail. To understand this site more accurately, they resolved the Mpro structure into complexes with two compounds used in the treatment of hepatitis C, Boceprevir and Telaprevir. These analyses allowed them to design 32 new molecules, maintaining variability in the P3 fragment. The structures of these compounds were verified by Nuclear Magnetic Resonance (NMR) and Mass Spectrometry. Using enzymological and structural analyses (Fluorescence Resonance Energy Transfert, FRET; Differential Scanning Fluorimetry, DSF), they showed that these molecules bind well within the Mpro active site and inhibit its activity with varying degrees of effectiveness. Some are even more effective than GC376 and 11b, two of the most powerful  inhibitors of Mpro in vitro. They then enacted the crystallographic structure of Mpro in complex with MI-23, the most powerful of all their inhibitors, and verified that this molecule has a binding mode that corresponds to the initial predictions.

Schematic diagram of the design of novel SARS-CoV-2 inhibitors: 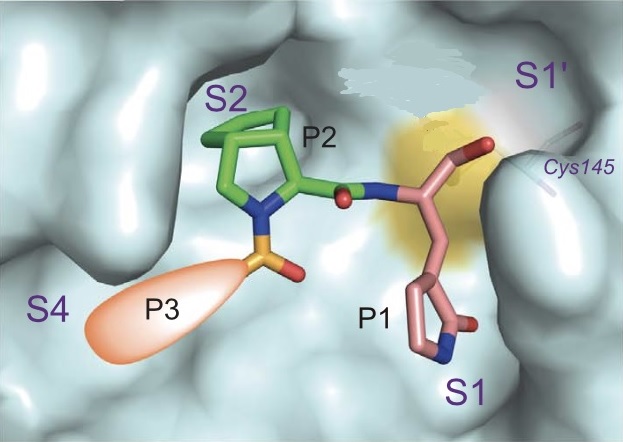 After these physico-chemical characterisations, they selected the 20 most powerful compounds and showed that they are not toxic for 6 cultured cell lines. In a model of Vero E6 cells infected with SARS-CoV-2, these compounds block cell death, and 6 of them proved particularly effective. In human pulmonary and hepatic cells (HPAEpiC and HuH7), these inhibitors blocked SARS-CoV-2 very effectively.

The researchers then evaluated the pharmacokinetic properties of these compounds. They selected MI-09 and MI-30, which show the best bioavailability in rats, that is, the proportion of molecules reaching the bloodstream after oral, intravenous or intraperitoneal administration. Based on the previous in vitro tests, we now know that a daily injection of 20 mg/kg is sufficient to ensure that the molecules are in sufficient quantities in the blood to block viral replication.

The compounds exhibit little toxicity since the rats remain alive and in good health when the inhibitors are administered in high doses (up to 10 times as much), over several days and using 3 routes of administration. In a pilot experiment on a model of transgenic mice infected by SARS-CoV-2, 50 mg/kg per day over 6 days of MI-09 or MI-30 prevents weight loss, reducing pulmonary lesions as well as levels of viral RNA in the lungs. Similar results are obtained in inoculating 2,5 times more virus and in administering 2 times more inhibitors. In mice having received the inhibitors, inflammation is reduced since levels of CXCL10 and IFN-beta (inflammatory chemokines) are lower, as well as the number of immune cells infiltrating the lungs.

Whether administered orally or by intraperitoneal injection, MI-09 and MI-30 can give protection from SARS-CoV-2. This work proves for the first time that Mpro inhibitors have an in vivo antiviral activity, which represents a significant advance in the development of anti-SARS-CoV-2 compounds administered orally.