COVID-19 takes on different forms depending on the patient, from asymptomatic to very severe cases. The majority of patients do, however, manifest moderate symptoms. In patients with severe symptoms, a huge immune response occurs, notably involving neutrophil polynuclear cells, monocytes and platelets, but this  response seems to be ineffective. The causes and consequences of these variations in forms of the disease remain little known, but researchers at the University of California in San Francisco have recently been studying them.

They compared 2 groups of patients: 11 patients with moderate symptoms (who spent a short time in hospital without requiring either a respirator or intensive care) and 10 patients who had severe symptoms (who did require intubation and intensive care). A transcriptomic analysis of single cells in the blood was carried out. This involved sequencing of mRNAs to find out the level of expression of each gene within different cells. The genes were transcribed into mRNAs before being translated into proteins.

What were the conclusions? Firstly, a correlation was observed between the number of polynuclear neutrophil cells and the disease’s severity. In patients suffering from moderate forms of COVID-19, the polynuclear neutrophil cells, monocytes, macrophages, dendritic cells and lymphocytes strongly express genes (ISG) stimulating the interferon response, in comparison to patients suffering from a more severe form. The interferons are cellular messengers that promote the development of antiviral  immunity. In the serum of patients with severe symptoms, certain factors appear to interfere with the expression of ISG genes. In addition, high levels of antibodies are found in the serum of patients with severe forms of COVD-19 compared to patients with moderate forms. These antibodies found in the serum of severely affected patients reduce viral load and seem to inhibit intracellular signals from the interferon receptor.

Overall, these results provide an initial indication as to why the immune response in severly affected patients is so disorganized. 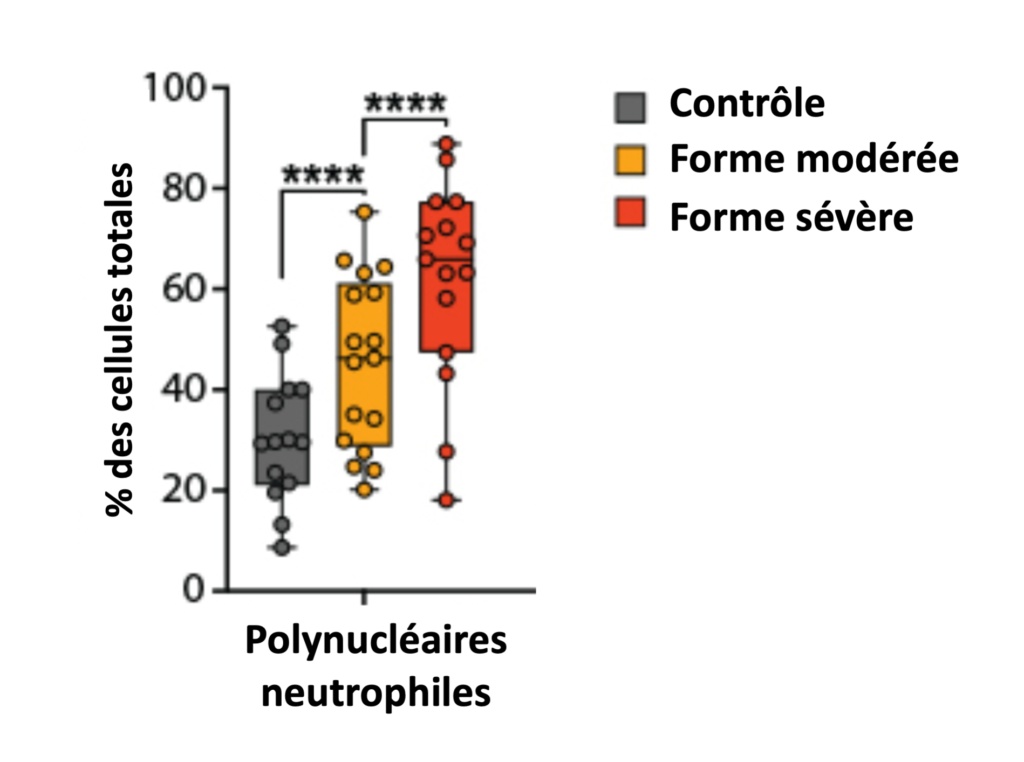