A “signature” of severe cases

The clinical evolution of COVID-19 differs greatly from one patient to another: there may be few or no symptoms, only moderate illness and complete recovery, severe illness with a developing acute respiratory distress (SARS), or multiple organ failure and eventual death. Several factors influence this development: age, genetic or immune system predispositions, obesity, diabetes, or cardiovascular illness. Although the divergence of symptoms between patients is still poorly understood, it is related in particular to a lack of coordination between B and T immune responses or high levels of pro-inflammatory cytokines. In responding to SARS-CoV-2, numerous complex immune system mechanisms are triggered and their development involves diverse cells that communicate between themselves.

To better understand what defines the severity of the disease as seen in blood activity, researchers at the NIH (Bethesda, USA) carried out a multiparametric and longitudinal follow-up (up to + 40 days according to each case) of 33 hospitalized COVID-19 patients. Using blood mononucleated cells (PBMC), this simultaneous single-cell-scale analysis (CITE-seq) evaluated gene expression levels of 188 surface proteins, but also global genes (mRNA transcriptome) and the sequence of antibodies and receptors. It also took into account levels of circulating proteins (including cytokines) over time and the characterization of different blood cell populations. This data was processed using computer modelling, then compared to results from other independent cohorts, in order to find correlations.

This study revealed indicators in  the blood in severely ill patients. It was seen that there exists a network of specific “signatures” (over or under-expression of particular genes) linked to the severity of the illness.

It seems that the timing of the analysis is crucial to be able to evaluate responses to the infection. The first samples (T0) were taken an average of 11 days after the appearance of symptoms, at the time of hospitalization. Several major events can be listed: 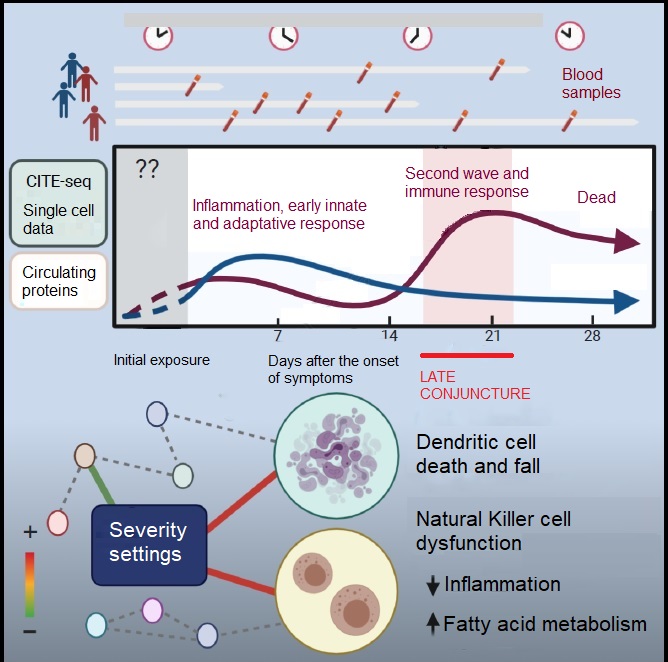 We are therefore now in a better position to describe the characteristics of blood in severe cases. This study did have certain limits however (no validation of results with proteins…) and needs to be confirmed with larger cohorts and using more regular blood samples. The hypotheses to explain the 2nd inflammatory wave also need to be tested on animal models. But the study does provide us with an “atlas” of genetic events and reveals a complex network of signatures linked to the severity of COVID-19, underlying as well the importance of timing when using strategic treatments. For example, persistent exposure to IL-15 may lead to the dysfunction of NK cells. Depending on the patient’s parameters, an anti-IL-15 treatment, in alternance with IL-15 (on-off-on), could probably re-establish the cells’ functioning at the time when a 2nd inflammatory wave occurs. We are reminded once again of the importance of a personalized approach to treatment in dealing with COVID-19.