Bats: an ideal reservoir for the virus

Many viruses that emerge have their origins in Chiropterans, better known as bats. This is the case with the Hendra, Nipah, Marburg, rabies, Ebola, MERS-CoV, SARS-CoV and SARS-CoV-2 viruses. These zoonoses (meaning transmission from animals to humans) are made possible by the particular characteristics of bats, which provide an ideal reservoir for viruses. While the risks of zoonose in the case of many viruses had been largely anticipated in scientific literature, this was not the case for COVID-19. Increasing human interference with natural ecosystems (climate change, urbanization, animal markets, etc.) would suggest that there will be other zoonoses to follow. And yet, financial support for research work in this area has decreased in recent years.

Chiropterans are well represented amongst mammals: their species are very diverse and they occupy almost all areas of the globe. Bats live relatively longer than humans if we take their small size into account. They are the only flying mammal and they play an important role in fertilization, pollination and control of insect populations. For bats, flying uses up a great deal of energy, so in order to conserve energy they can enter a state of micro-hibernation during the day (or for longer periods). They break down sugars very quickly and can accelerate their cardiac rhythms according to need. Their diet is extremely varied: fruit, insects, pollen, fish, blood (in the case of vampire bats). They are capable of echolocation by ultrasound (acoustic vision) and of magneto-reception (perception of magnetic fields).

In terms of their health, they respond better to stress than other mammals, develop very few cancers, and are capable of carrying numerous viruses without falling ill. They develop no symptoms if inoculated with high viral charges of Ebola,  MERS-CoV or SARS-CoV-2. In contrast, the pangolin, suspected of being an intermediary host between bats and humans, develops pulmonary edema and serious inflammation when it is infected by SARS-CoV-2. The bat is the mammalian host with the most zoonotic pathogens with, for example, 54% of known coronaviruses having their origins in bats. This particularity is due to the fact that they are capable of regulating their inflammation and immunity (notably during hibernation), which modulates the defence/tolerance balance and prevents them from becoming ill. By contrast, critical cases of COVID-19 or Ebola in humans arise in the main from hyper-inflammation leading to multiple organ failure.

In more detail, the regulation of the innate immune response in Chiropterans is different from ours and allows them to control the numerous viruses they carry. Whereas in humans the interferon (IFN, the pro-inflammatory cytokine involved in innate antiviral responses) has a weak basal expression which is highly induced in response to viruses, in bats the basal level of expression is much higher and much less inducible, minimizing the production of other pro-inflammatory cytokines. In addition, the IFN in bats activates genes that do not exist in humans. Mechanisms of autophagy (degradation of the virus by the infected cell) are thus much more present than in humans. The bat also expresses many more Heat Shock Proteins (HSP) and agents that repair DNA, which makes it able to withstand very high temperatures (especially in flight) and oxidative stress, and to better regulate inflammation, cell death, senescence and carcinogenesis. Certain genes involved in these responses are different (STING), regulated at low levels(NLRP3), or absent (PYHIN).

Although variations exist between different species, the genetic evolution of bats may have been governed by metabolic demands and high body temperatures required for active flight. The differences in its immune responses, which do not systematically attempt to fight viruses and apply less selection pressure, could explain why viruses become so virulent when they pass into humans, a host much more reactive to their presence. 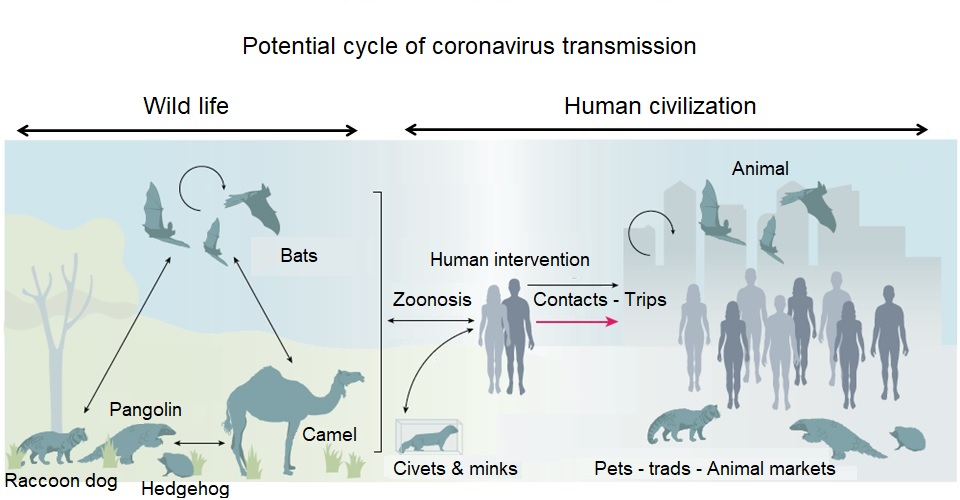 The bat is therefore a very particular kind of mammal, endowed with robust health. More intensive and coordinated international research on this animal is necessary so as to better identify the key elements in its regulation of inflammation. However few tools or reagents are currently available and the bat is still not an animal-model for laboratories. However, its study could help us to predict, prevent and control future zoonoses. The bat could also give us important tools for combatting ageing, cancer and numerous auto-immune and infectious diseases.