Asian bats may host many coronaviruses

The majority of human viruses originate in animals. Bats in particular make up a significant viral reservoir (as shown in the Ebola, Marburg, Corona and Rage viruses) while accounting for 22% of mammal species, with 1420 varities. In 2019, 6 human coronaviruses (HCoVs) were known: HCoV-229E, HCoV-OC43, HCoV-NL63, HCoV-HKU1, MERS-CoV and SARS-CoV. At the beginning of 2020, SARS-CoV-2 was at the origin of a new epidemic of pneumonia in Wuhan (China). Retrospective studies have shown that the Rhinolophus affinis (or intermediate horseshoe bat) and the R. malayanus (or Malayan horseshoe bat) were carriers of the RaTG13 and RmYN02 viruses, 2 very close strains (with 96% homology for RaTG13), which is significant since the Manis javanica pangolin (the animal reportedly at the origin of human contamination) was a carrier of these 2 strains. Recently the STT182 and STT200 strains were identified in the R. shameli (Shamel’s horseshoe bat) in Cambodia (with 93,6% homology) and RacCS203 (91,5%) was identified in the R. acuminatus (Acuminate horseshoe bat) in Thailand. The genetic variety of these viruses found in the bats of Asia seems therefore to have been underestimated.

Chinese and Australian researchers (at the Universities of Shandong and Sydney, and the Yuhan Center of Conservation) have identified new strains of coronavirus in the Yunnan region of China. Between May 2019 and November 2020, they collected 411 fecal, oral or urinary samples from 342 bats (23 different species). Genetic analysis enabled them to identify 7 new sarbecoviruses (genus Betacoronavirus) and 17 new Alphacoronavirus. Amongst the sarbecoviruses, 4 were close to SARS-CoV-2 and 3 close to SARS-CoV. The complete genome of the RpYN06 (Betacoronavirus) has 94,48% homology with that of SARS-CoV-2, making it the 2nd closest strain after RaTG13 (and the closest if we omit the spike protein).

It seems clear that several species have evolved by recombination, that is, where 2 different strains co-habiting in the same animal exchange fragments of the genome. For example, certain viral genes are even closer to SARS-CoV-2: the viral polymerase and ORF10 protein of the RpYN06 strain are respectively identical at 98,36% and 100%, while the spike gene falls to 76,33%. In the 4 strains close to SARS-CoV-2, no spike protein has a furin cleavage site, an important element in infecting human cells. In vitro experiments (flow cytometry, SPR) have shown that their RBDs (Receptor Binding Domain, the region of the spike essential to linking with the ACE2) do not bind at all (RpYN06), or poorly (RsYN04), to the human ACE2 receptor. Using computer modelling that also included other species (49 in total), the researchers showed that the geographic distribution of bats is highly variable, and that certain regions such as Yuhan have an elevated risk of viral evolution and transmission.

With the recent discoveries in Thailand and in Cambodia, this study shows clearly that other viruses very close to SARS-CoV-2 continue to circulate actively amongst the bats of Asia, particularly in the south and south-east. However, these new strains, deriving from a different genetic line, carry spike proteins that are ill adapted to the infection of human cells.

It should also be noted that the genetic diversity of spike genes in sarbecoviruses, largely underestimated, give these viruses a certain adaptive flexibility. The risks of transmission are, however, limited by the fact that rhinolophidae bats live largely in dense forests and evolve over relatively short distances, due to a morphology that is not adapted to long flights.

The ecological modelling in this study suggests that certain other species migrate during the breeding period (April), which facilitates the sharing of strains since they share the same breeding grounds. These regions, home to many animals susceptible to coronavirus infection, should therefore be the object of careful surveillance. 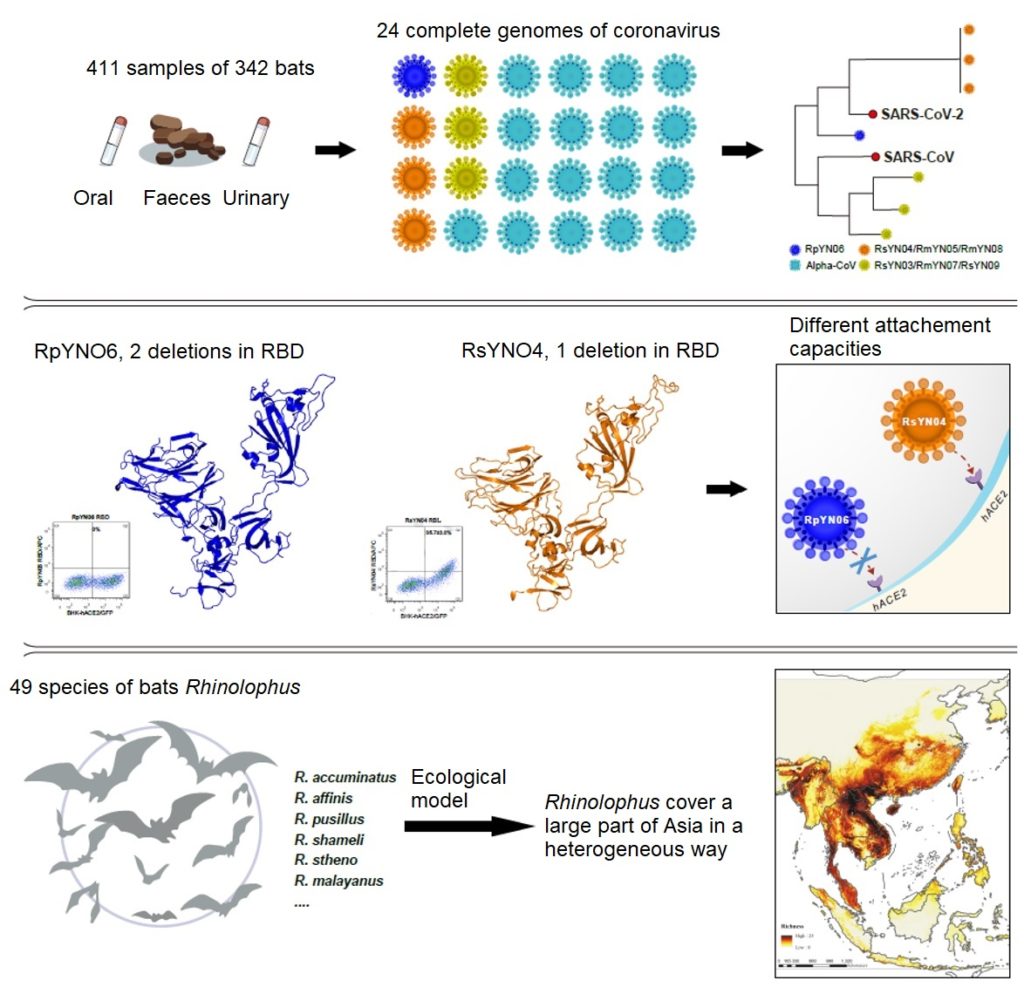