A single mutation could have enabled transmission to humans

The recent emergence of SARS-CoV (2003), MERS-CoV (2013) and SARS-CoV-2 (2020) has demonstrated the severe risk of epidemic posed by coronaviruses. Many isolated strains present in bats or pangolins are very close to SARS-CoV-2 (>96% homology in RaTG13), which suggests that the COVID-19 pandemic has its origins in animals. However, the mechanisms responsible for the jumping of the species barrier from animal to human are unknown.

American researchers at the Regional College of Veterinary Medicine, Blacksburg, have searched the SARS-CoV-2 genome for molecular signatures of positive selection that could be at the origin of this jumping. Using powerful statistical algorithms (OmegaPlus and RAiSD), they analysed 182 792 viral genomes referenced in the GISAID database. They thus identified regions with mutations that have spread but have evolved very little (known as “selective sweep”).

Among the 8 genomic regions detected, 4 are found in the ORF1ab gene and 4 in the spike, the protein that regulates entry into human cells and determines the virus’ targets (or its “tropism”). SARS-CoV-2 belongs to the sarbecovirus family (a sub-category of the β-coronaviruses). It was therefore useful to investigate its specific differences with this family to retrace its genetic history.

One important disparity appeared. The researchers identified an amino acid in the spike protein which differs from one virus to another. This “residue” 372, situated in the RBD (Receptor Binding Domain) of the spike, is a threonine (T) in sarbecoviruses, but an alanine (A) in human SARS-CoV-2. These are therefore different amino acids deriving from a mutation.

The analyses suggest that human body temperature probably did not cause theT372A mutations, and nor did D416G (the first variant to become dominant), although this latter does provide more stability in the spike. In vitro affinity tests then showed that T372A improves the spike-ACE2 interaction. If a threonine is reintroduced into a true ancestral strain of SARS-CoV-2 (A372T), it loses up to 64 times its capacity for replication in human pulmonary cells. The replication enhancement induced by T372A is much greater than that induced by D614G, which multiplies the replication by about 3 times under the same experimental conditions.

This work suggests that the T372A mutation was a major event which probably facilitated the passage of the virus into humans and, in turn, the capacity for inter-human transmission. Situated in the RBD of the spike, it suppressed a sugar in position 370, making interaction with human ACE2 possible. It should be noted that the 2 residues (370 and 372) are not situated in the RBM (Receptor Binding Motif), which interacts directly with the ACE2.

However, we do not know if this sugar blocked the interaction or if it prevented certain structural transitions in the spike’s trimer. It should be noted that T372A is not present in SARS-CoV, which suggests that other residues from this region could have the same effect. We also do not know if earlier mutations contributed to this event since the strains preceding Wuhan are not referenced. A strong positive selection occurred at some point so that the virus could adapt to humans, giving it higher replication and transmission capacities. 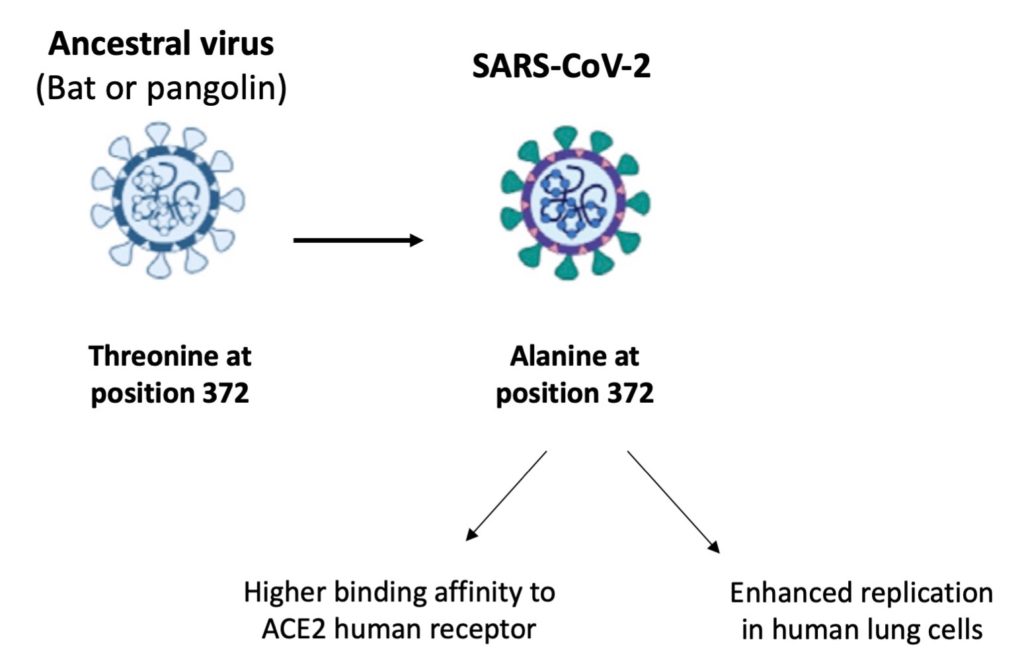