Are NK cells effective against SARS-CoV-2?

Innate, or non-specific, immunity is one of the organism’s first lines of defence against pathogens. NK (Natural Killer) cells are one element of this immunity. These cells are lymphocytes which, unlike B and T lymphocytes in adaptive immunity, do not need to have had previous contact with the pathogen in order to become rapidly active against it. NK cells recognise foreign or infected cells and destroy them. These cells have well-established activity against viruses, but their role in the immune response against SARS-CoV-2 remains poorly understood. German researchers at the Universitätsmedizin Berlin have analysed the role of NK cells in the organism’s fight against SARS-CoV-2.

The researchers firstly observed that in patients infected with SARS-CoV-2, the quantity of available NK cells correlates with the viral load, unlike with B or T cells: the viral load reduces more quickly in patients with a “normal” number of NK cells (>40/µL). They then studied in vitro SARS-CoV-2 replication control by NK cells from hospitalized COVID-19 patients, compared with NK cells from uninfected individuals.

NK cells recognise and accurately target cells infected by SARS-CoV-2, but those from hospitalised patients are less effective in controlling virus replication. The NK cells of these latter patients have difficulties in secreting pro-inflammatory cytokines (immunity-activating messengers) and in destroying the target cells (cytotoxicity). Using transcriptomic analysis (the study of levels of gene expression), the reseachers showed that these modifications in the NK cells’ capacities occur under pressure from cytokines that change the expression of certain genes.

In conclusion, the scientists showed in this study that innate immunity can play an important role in controlling SARS-CoV-2 infection through NK cells. In seriously ill patients, these NK cells seem to be less effective in controlling the virus. 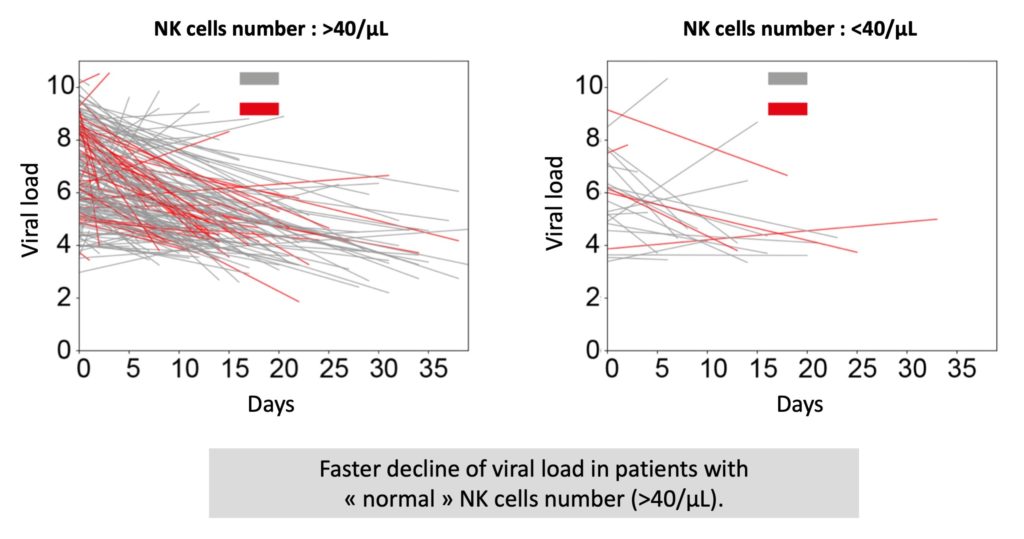