A cellular RNA detector involved in the defence against COVID-19

The type 1 interferon (IFN-I) plays an essential role in defending the organism against SARS-CoV-2. Treatment by IFN in serious cases of COVID-19 has been shown to be effective. Interferons are cytokines, small protein-messengers that orchestrate and regulate the immune response by activating it or slowing it down. The type 1 IFN is pro-inflammatory, that is, it activates immunity. Numbers of interferons are regulated by the ISGs (IFN-stimulated genes) which are activated to increase production of IFN molecules. To help the organism to defend itself against COVID-19, it is therefore important to understand IFN-I activation. Researchers at the University of Glasgow have studied variations in IFN-I responses in individuals to attempt to correlate this to the seriousness of the illness. However, IFN-I is only a messenger. They therefore looked for effectors of IFN-mediated inhibition of SARS-CoV-2 replication.

The researchers used an in vitro method of infection of the lung cells by SARS-CoV-2. They firstly confirmed that, in their model, IFN-I does enable inhibition of the virus. They then effected a large-scale activation of the ISG genes (that increase production of IFN-Is) in this cellular model, so as to be able to spot effectors of anti-SARS-CoV-2 defences.

What were their observations? Six candidate-effectors were identified. Some of these effectors are already known for their inhibition activity on other viruses, such as flu, while others are involved in the transport of cholesterol. One of the effectors is a double-stranded RNA detector (ds) involved in anti-viral defence (OAS1), which enables the activation of an RNase. An RNase is an enzyme that degrades RNA in cells, whether viral or cellular RNA. The destruction of viral RNA slows down virus multiplication. Lysis of cellular RNA often leads the cell to apoptosis (cellular death), which also slows down virus propagation. This detector of RNA ds appears to be most effective in its anti-SARS-CoV-2 activity. The researchers verified that OAS1 is also active against the Alpha (UK) variant.

They then analysed the detector’s mode of action more closely. It does seem to be present in the nasal epithelium, a potential site of SARS-CoV-2 infection. So they then tried to understand how OAS1 could detect SARS-CoV-2 infection. It seems that the OAS1 detector interacts with different regions of the virus genome situated in one of its extremities.

Even if it is not the only effector in the immune response to be engendered by IFN-Is, OAS1 plays a central role in the organism’s defence against COVID- 19. In addition, this action is specific; the researchers noticed that adding a small motif on the detector (prenylation) is indispensable for its anti-SARS-CoV-2 activity.

This was confirmed by the connection that the scientists identified between the severity of COVID-19 and OAS1 activity. They studied 499 hospitalised British patients. All these patients expressed OAS1, but the absence of prenylation of OAS1 was linked to a higher risk of developing serious illness.

SARS-CoV-2 originated in an animal reservoir and has jumped the species barrier in infecting humans. This has exposed the virus to new defence systems that it had never previously encountered. The IFN-I OAS1 effector, detector of RNA ds in the cell that causes an RNA lysis via the RNase, is one of these defence systems. This effector plays a crucial role in response to production of IFN-Is. With the emergence of new variants, this mechanism needs to be closely monitored in case the new variants are able to develop a way of escaping the RNA ds OAS1 detector. 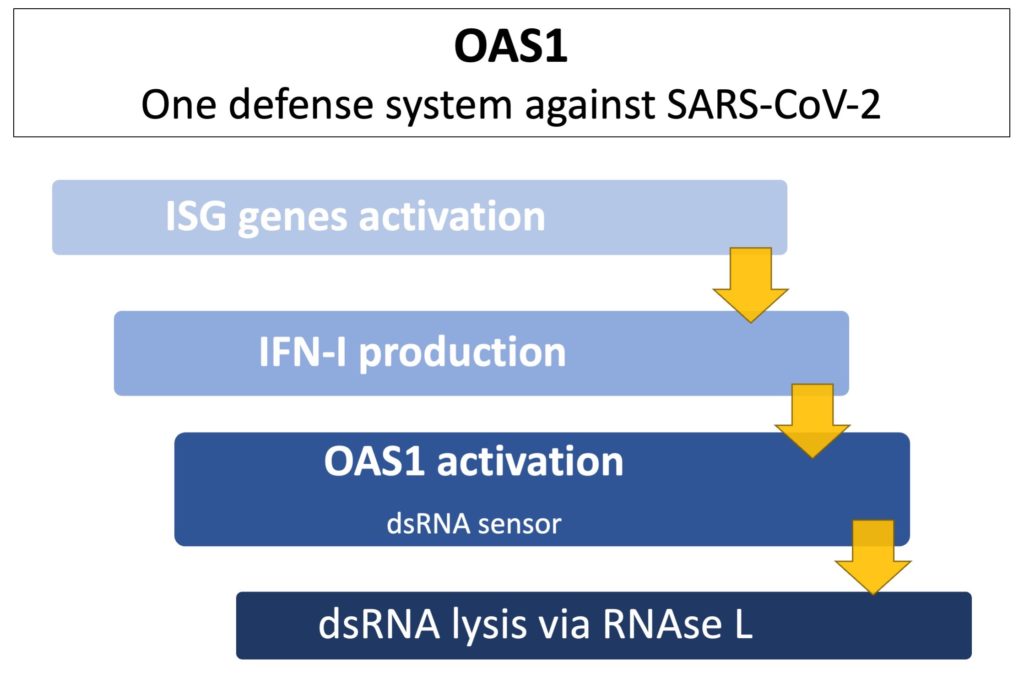