Even though we have made progress in treating severe cases of COVID-19, the medicines available are limited. Since the beginning of the pandemic, the development of vaccines has been a worldwide priority. More than 182 candidate-vaccines have been announced, of which at least 81 have been tested in more than 230 clinical trials. These vaccines use various technologies: some are traditional, such as those using inactivated or attenuated viruses, or subunit vaccines; others are innovative, such as the messenger RNA vaccines. Since demand is worldwide and exceeds current production capacities, it will be necessary to develop different categories for specific populations.

In order to be effective, it is now generally agreed that a vaccine must elicit an antibody response against the spike (S) protein. A T lymphocyte response is also important, notably for long-term immunity. This study presents the results of phase 1 clinical trials of a VLP vaccine (“Virus Like Particle”), developed by Canadian researchers, who have shown it to be safe and effective.

The researchers have developed a vaccine which mimics a viral particle, on the surface of which the entire SARS-CoV-2 spike surface proteins are shown, so as to trigger an immune response. These particles are produced by genetically modified plant cells. They have tested three candidate-vaccines, one with no adjuvant and two with 2 different adjuvants.

These candidate-vaccines were tested on 180 individuals aged between 18 and 55 (57% women and 43% men). 178 received 2 doses. During clinical trials, the participants were studied over 1 year, though the study was concerned only with short-term effects, those occurring up to 21 days after each injection. Regarding the safety of these vaccines, adverse events were recorded during the observation period, from 15 minutes after vaccination, in two telephone interviews, on day 1 and day 8 following vaccination, and during the control visit on day 3.

Undesirable side-effects were light to moderate: principally, pain at the injection site, tiredness and headaches. Formulations with adjuvants caused more undesirable side-effects. Concerning the immunogenicity of these candidate-vaccines, the scientists firstly measured the antibody response against the spike viral protein. The vaccine without adjuvant did not lead to antibody production after the 1st dose, and only a weak response after the second. The two vaccines with adjuvants enable an anti-spike antibody response after the first injection, but this response is greater after the second. They then measured the response of the T lymphocytes. Whether it relates to vaccines with or without adjuvant, it seems to be more variable depending on the individual as a whole rather than the humoral response (antibodies).

In conclusion, the first phase 1 trial of this candidate-vaccine, with or without adjuvants, shows it to be well tolerated and effective only where adjuvants are present. Adjuvants enable an increase in the humoral response and mean the dose injected is reduced.

These first results focalise on short-term effects, but those effects remaining for up to a year after vaccination will be analysed shortly. This study is based on a limited number of participants, but phase 2 and 3 clinical trials are in progress and involve a larger number of people. It will also be necessary to observe the effects of this vaccine on emerging SARS-CoV-2 variants. 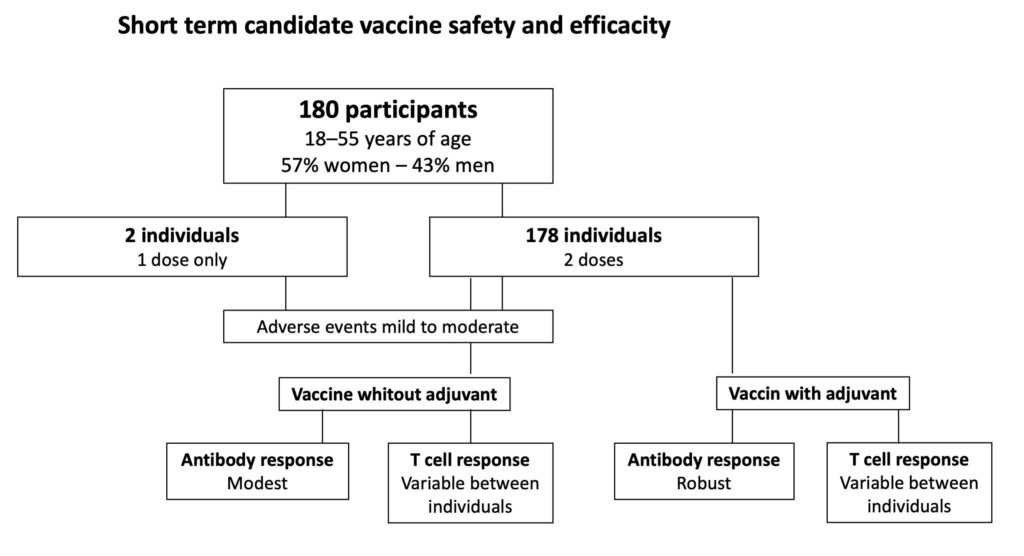