A new treatment for COVID-19?

Infection caused by Sars-CoV-2 can result in a wide range of clinical symptoms, from asymptomatic individuals to severe cases that may even lead to death. In severe cases, symptoms include a high fever, a dry cough, pneumonia and inflammation of the lungs. These clinical signs are above all due to a pronounced inflammatory response caused by the overall immune system. In these patients’ serum we find pro-inflammatory cytokines and chemokines such as the interferon gamma (IFNg), the TNFα, or different interleukins: we can speak of a cytokinetic storm.

During this inflammatory response, the Janus Kinases (JAK) play an important role: these are cellular proteins that act as intermediaries between the pro-inflammatory messengers. As a result, the use of therapeutic drugs targeting JAK proteins can reduce the severity of the illness by limiting cytokine synthesis. Baricitinib is a treatment used in rheumatoid arthritis that is known to inhibit JAK proteins. This treatment therefore has an anti-inflammatory effect. In addition, it has been shown in modelling and in vitro tests that Baricitinib could inhibit certain of the virus’ mechanisms when attempting to enter cells and thereby reduce the viral charge.

Monkeys, non-human primates, are a model of infection and of disease monitoring (pathogenesis) for COVID-19. For this reason researchers at the University of Atlanta analysed the immunological and virological effects of Baricitinib as a treatment for COVID-19 in macaques. The monkeys were infected with Sars-CoV-2, and some of them were then treated with Baricitinib. Some were treated every day 48 hours after infection, and others not.

As shown in the following diagram :

Initial results show that Baricitinib is well tolerated by the macaques, with no sign of treatment-induced pathologies when compared with the untreated macaques. The macaques’ state of health was checked by vets daily (looking at appetite, posture, agitation, oxygen levels…). Viral charges were evaluated using nasopharyngeal swabs and bronchoalveolar lavages. No difference was observed between the treated and non-treated groups, which means that the treatment does not allow levels of virus replication to be reduced in the cells, contrary to results of modelling that was carried out before.

However, though the viral charges are the same in the 2 groups, the pathological effects of the virus are quite different. Pathology and pulmonary infection were checked. To do this, x-rays of the macaques’ lungs were taken and the pulmonary oedema was measured. One of the untreated macaques had a severe pneumonia. Inflammatory markers were measured in the animals’ plasma, notably ferritin and C-reactive protein. The latter are markers in severe cases of COVID-19 in humans. But they were higher in the animals not treated with Baricitinib. In addition, the treatment reduces the recruitment of polynuclear neutrophils and macrophages in the  pulmonary alveoli. Finally, the lungs of the animals were dissected after euthanasia, ten or eleven days after infection by the virus. The lungs of the treated macaques were less damaged than those of the non-treated animals. Overall, this data suggests that Baricitinib does have a therapeutic effect in reducing inflammation and in the pathology of the lungs.

Finally, the adaptive cellular immune response in the bronchoalveolar lavages was investigated. It was discovered that the T lymphocyte (TL) CD4+ and CD8+ were reduced in the treated macaques.

The results of these experiments can be summarized as follows : 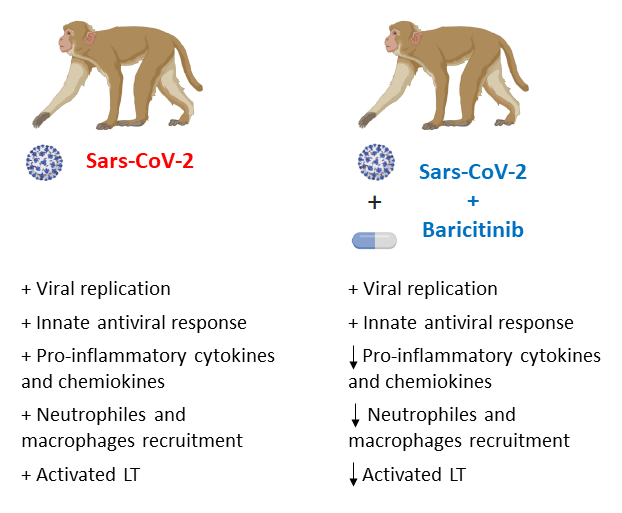 In conclusion, the Baricitinib treatment is tolerated well in macaques in doses corresponding to human dosage levels. The treatment led to reductions in inflammation and pulmonary pathology, the inflammation being mediated by the cytokines, but without reduction in the innate immune response. However, it must be borne in mind that the number of macaques used in this study was small  and that the treatment was administered 48 hours after infection by Sars-CoV-2. The question remains as to the effectiveness of the treatment if given to patients with a more severe form of the disease.