A model of variant spreading within a vaccinated population

The 2nd year of the COVID-19 pandemic has been marked by Variants of Concern (VOCs) that have caused more serious epidemic waves than occurred during the 1st year. These include the Alpha (UK), Beta (South African), Delta (Indian) and Gamma (Brazilian) variants, which are more contagious and are able to evade immune responses to a certain extent (though this varies according to the strain). On an individual level, vaccines are less effective against reinfection but continue to protect against mortality. However, the consequences on the epidemiological dynamic in the population at large are more difficult to calculate. For example, a reduction of 30% in vaccine efficacy will not necessarily mean 30% more infections in vaccinated individuals.

American researchers at Harvard University (Boston) have modelled the emergence and the spread of a variant in a vaccinated population practising social distancing and other protective measures (supposing a population of 100 million people over 3 years). The hypothesis was of a variant replacing the original strain with an R0=2,5. Depending on the scenario, it would then have an increased transmission capacity of 60% (variant 1, Alpha-like), an evasion capacity of 40% (variant 2, Beta-like), or both (variant 3, Delta-like). This model evaluated the impact of several scenarios on the total number of infections, and also therefore the extent of the epidemic, and assumed that it would be proportional to hospitalisations and the total number of deaths. In the default scenario, conditions would be more favourable with a constant rate of vaccination until 100% of the population were covered, protective measures maintained indefinitely (causing the R0 to drop to 1.5) and with a vaccine efficacy of 95% that would not decrease with time.

What were the results? In a non-vaccinated population, a variant becomes dominant only if it has increased transmissibility, but not if it escapes immune responses prompted by an infection. If the population reached a situation of optimal vaccination, only variant 3 would become dominant, since the capacity to evade vaccinal immunity alone would have little impact on the overall population. The sooner vaccination begins, the more the epidemic is reduced, especially if the variant is more transmissible, since then the infection peak would be attained earlier too. The rate of vaccination would therefore be less significant. When 100% of the population is immunised (naturally or through vaccination), only variant 3  would cause a significant number of reinfections and clusters, while the others would cause only individual reinfections.

The researchers then envisaged less favourable conditions. If protective measures were less stringently observed after only 50% of the population was vaccinated, or if vaccine efficacy fell to 70%, then variant 2 would have little impact, unlike more transmissible variants. However, the variant’s escape capacity would nevertheless have a greater impact than in the default situation. If the situation were less than optimal on all fronts (50% vaccination + 70% efficacy + relaxing of protective measures), the variants would become uncontrolled. In the case of the original strain and variants 1 and 3, relaxing of protective measures would have the same impact as the absence of vaccination. In this scenario, variant 2 would be responsible for an increase in reinfections and would cause a second wave, the extent of which would depend on levels of escape capacity, reasonably well controlled in the case of the original strain. With variant 3, the wave would tend to be similar to that caused by the original strain, causing less infections since fewer vaccinated or convalescent individuals would be reinfected. In a scenario where all the strains were highly transmissible, natural immunisation would be strong and occur early, and vaccination would have less impact. Only escape variants would cause new waves of the epidemic.

In a naïve population (where no precautions have been taken), the highly transmissible variants would have the advantage. Later, variants able to escape immune responses would cause successive waves through reinfection clusters, with relatively little effect on mortality, unless the variants also had better transmissibility. This is why Beta did not become dominant in most regions of the world. The impact of a variant therefore depends on the strain it replaces: if variant 3, similar to Delta, replaced a less transmissible strain, it would have little impact on mortality and would struggle to spread. Escape variants are only a problem if population immunity is not optimal: good enough to influence viral evolution, but not sufficient to control infection.

This work provides a solid base to help forecast the behaviour of future variants and to foresee the health strategies needed to limit their impact. But it is also critical of the epidemiological impact of the unequal deployment of vaccines worldwide: 70% of vaccinated people live in rich countries, and only 4% in certain other countries. 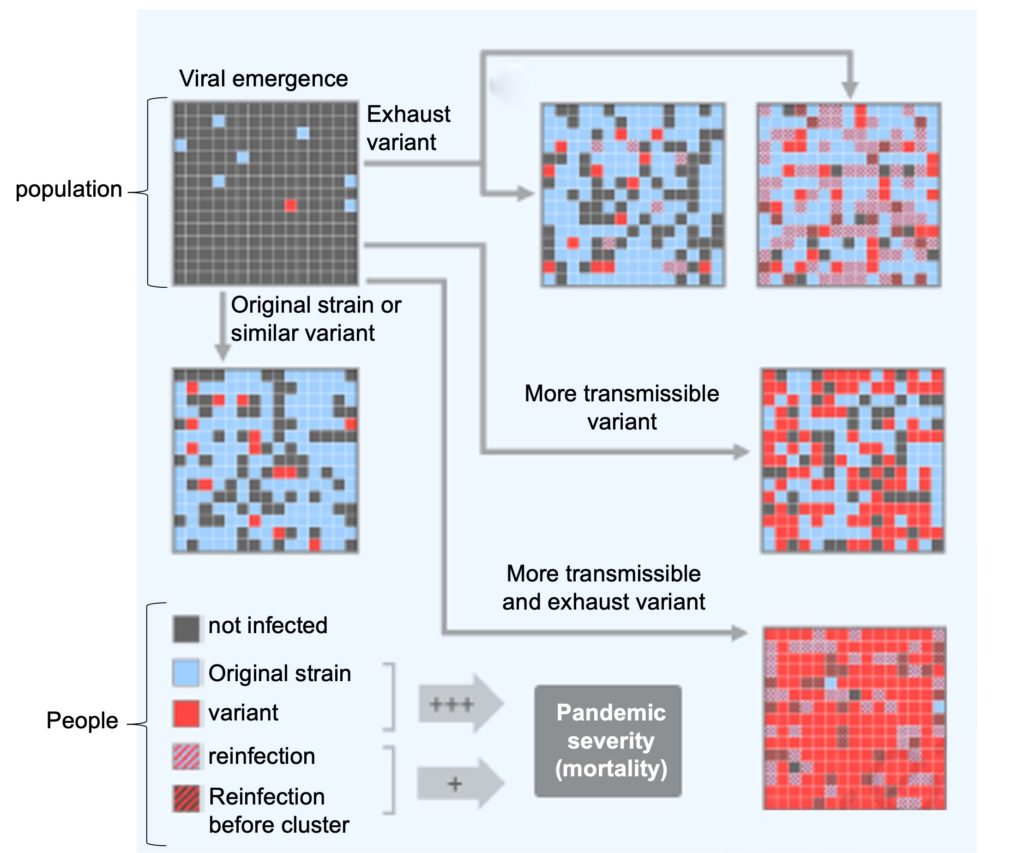