A model for the study of variants

Several variants of concern (VOCs) of SARS-CoV-2 are more infectious than the original Wuhan strain. It is therefore crucial to understand why in order to develop effective vaccines and other treatments. However, research is limited by the fact that SARS-CoV-2 must be handled in laboratories with level 3 of biosecurity (BSL-3). The majority of work on the infectiousness of SARS-CoV-2 is based on the model of pseudotyped lentiviruses, that is, viruses from other families that express the spike protein (that governs viral entry into cells) of SARS-CoV-2. However, the VOCs also carry mutations in other genes and we cannot therefore evaluate their role in viral fitness (the overall efficacy of replication and production of a virus).

To remedy this situation, researchers at the University of California (Berkeley) have developed a system of non-replicating viral particles (virus-like particles, VLP) that mimic infection by SARS-CoV-2. These “SC2-VLP” are made up of 4 SARS-CoV-2 structural proteins (S, M, N, E) and are capable of transporting mRNA “reporters” (luciferase-T20) that enable the evaluation of the effects of diverse mutations on the efficacy of viral entry.

Surprisingly, none of the spike mutations found in the Alpha, Beta, Gamma and Epsilon VOCs significantly enhances viral entry, which contradicts results published in the literature (bases on lentivirus models). However, if the mutations in the N gene found in the Alpha and Gamma VOCs are introduced (including R203K/G204R), then viral entry increases 7,5 times and 4,2 times respectively compared to the Wuhan strain. Four other mutations situated in the 199-205 domain of the central “linker” domain of N increases entry 10-fold (P199L, S202R, R203M and R203K). R203M is also present in the Delta VOC.

In analysing the VLPs produced, it seems that these mutations increase the viral assembly (the proteins between them, but also the packaging of the RNA in the VLPs). The researchers confirmed this observation by reintroducing S202R and R203M into the genome of the real Washington strain (reverse genetics), since they increase viral RNA production 45- and 23-fold respectively, after 72 h of infection, and infectious virus production 166- and 51-fold.

A commercial anti-spike antibody (MM43) effectively neutralises the VLPs carrying the S genes of the VOCs (including Delta), showing that this model may also be used to choose between neutralising antibodies.

The SC2-VLP model therefore enables the effects of mutations in structural genes to be studied at several stages of the viral cycle (entry, assembly, maturation and budding) without using infectious viruses. This may prove very useful in the development of vaccines or other treatments that target these steps, such as neutralising antibodies. It has allowed the unexpected role of a mutation in the N gene of the Delta VOC (which increases viral fitness) to be highlighted. However, the molecular mechanisms remain unexplained. 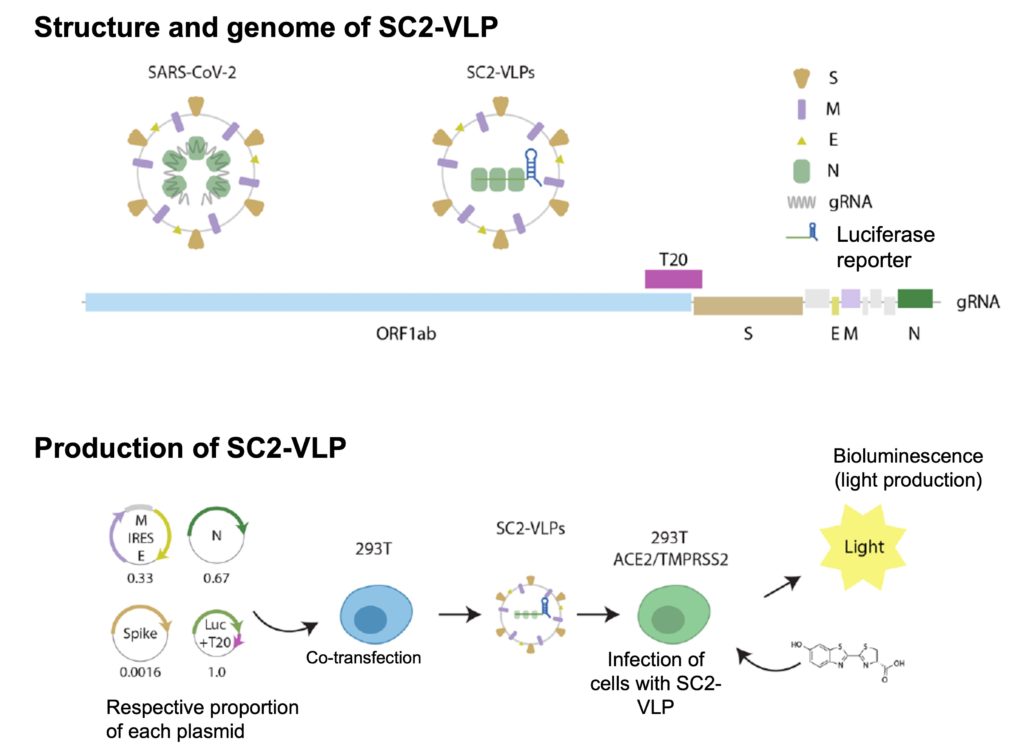