A 3rd dose of the vaccine improves protection

Israel initiated a massive vaccination campaign against SARS-CoV-2 very early on in the outbreak. More than half of the population had been fully vaccinated (2 doses) by the end of March 2021. Incidence fell from 900 cases per million inhabitants per day in mid-January, to less than 2 by June 2021. However, the emergence of variants brought about a resurgence in cases and severity of illness. A recent analysis showed a lessening of immunity against SARS-CoV-2 in the population, especially against the dominant Delta (Indian) variant. In June and July 2021 the Israeli authorities approved injections of a 3rd dose for high-risk people and those aged over 60. Researchers have analysed the effects of this 3rd dose on infection rates and serious cases of COVID-19.

The researchers studied data from the Israeli Ministry of Health between the 30th of July and the 31st of August 2021. More than a million people aged over 60 had already received 2 doses of the Pfizer-BioNTech mRNA vaccine at least 5 months ago. The scientists firstly compared rates of infection by SARS-CoV-2 and the number of severe cases in individuals older than 60 having received a 3rd dose with those people who had had only 2 injections. What were the results? Rates of infection were 11 times lower in individuals having received 3 doses, and the number of severe cases decreased almost 20-fold in comparison to those who had been given only 2 doses.

The scientists were thus able to graph and calculate the reduction factor in infection rates between individuals having received a 3rd dose and those who had not received it. They observed that between the 12th day and the 25th day after the 3rd dose, the number of infections was 7 to 20 times less. The slight reduction observed in the first twelve days must have been due to behavioural changes in the days following vaccination since the vaccine would not have yet had an effect on immunity.

In conclusion, while recent studies had shown the effectiveness of a 3rd dose in a laboratory situation, here scientists proved that this observation translated into a net lowering of infections and serious cases of COVID-19 amongst real people. Israel was the 1st country to make supplementary doses of the Pfizer-BioNTech vaccine available for the over-60s. Since then, authorisation for a 3rd dose has been extended to the rest of the population. It will now be necessary to monitor the effectiveness of this 3rd dose over the long-term. 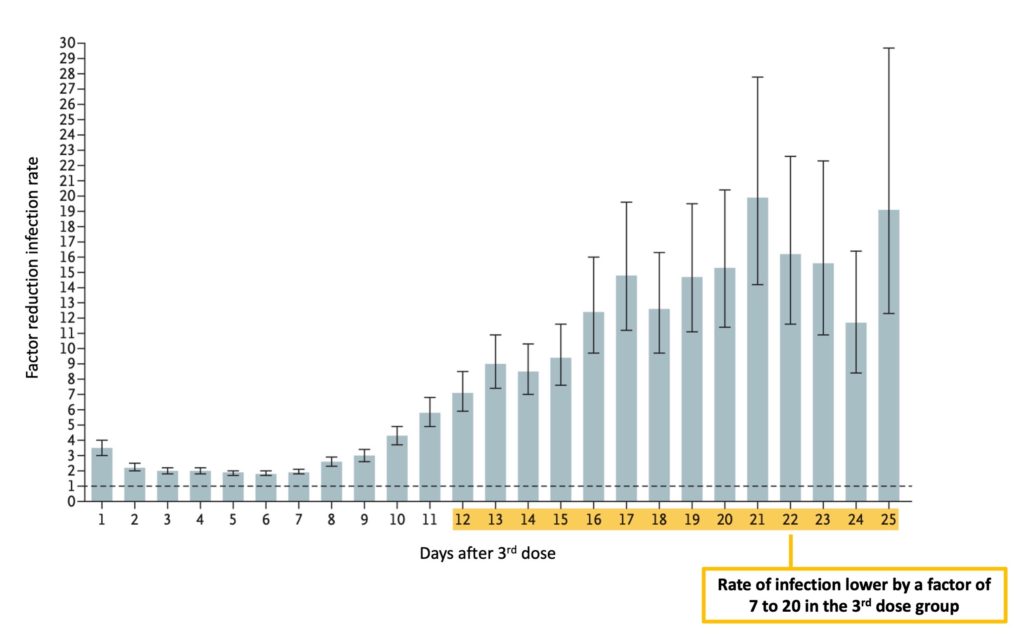