When should the vaccine be given?

In this time of pandemic, availability of safe and effective vaccines against SARS-CoV-2 is a key condition for being able to reduce the severity of illness and limit transmission. Eleven vaccines have already been authorised in at least one country. The three main vaccines remain the 2 mRNA Pfizer-BioNTech and Moderna vaccines, approved in 60 and 38 countries respectively, and the adenovirus-vectored Oxford-AstraZeneca vaccine. These 3 vaccines have between 60 and 90% effectiveness according to clinical studies, depending on whether one or two doses have been given. All are administered in 2 doses, with a time of 21 to 28 days between the two.

Certain countries such as Canada or the United Kingdom have chosen to give the second injection later, for logistical reasons or with the aim of maximising the number of people having received the first dose. Only the Oxford-AstraZeneca vaccine has undergone clinical trials using different intervals between the 2 injections, with a maximum gap of 3 months. But the effectiveness and the length of protection given by the vaccines is still not known. An international study (American, British, Australian and Canadian) has recently modelled the epidemiological evolution of the SARS-CoV-2 pandemic using one or two doses of the vaccine, demonstrating that the long-term evolution could be variable and dependent on the effectiveness of the first dose.

The researchers factored in natural immunity acquired after SARS-CoV-2 infection, a protection that reduces gradually over time. They included two types of vaccinated people in the model: those having received one dose and those having received two. Even countries that extend the period between two vaccines do not envisage administering only one dose, but this possibility was taken into account as an extreme case. In their model, the researchers estimated a relatively optimistic rate of vaccination, with 2% of the population receiving a first dose per week. They thus showed that the effectiveness of the number of doses depends greatly on the impact and duration of protection of the first. Giving a large part of the population a first dose of the vaccine does allow transmission rates and the number of severe cases of COVID-19 to be reduced. However, in a worst-case scenario, if the effectiveness of the first dose is poor, these short term benefits will quickly disappear. This situation can be avoided by administration of a second dose soon afterwards.

With the emergence of numerous variants in recent months, the scientists wanted to study immune escape, whether natural or artificial, over the long term. The more a virus replicates in an environment with strong selection pressure, the greater the risk of the emergence of new variants. When vaccination coverage is low, the epidemiological consequences are significant, and this may promote the development of variants. It is therefore essential to ensure a certain equity in the distribution and deployment of vaccinations throughout the world.

The best strategy may be to vaccinate a maximum number of people with a first dose, then give a second dose according to the manufacturer’s recommendations, ensuring that the gap between the two is not too long. In any case, the effectiveness and the length of protection given by the first dose must be monitored, since the more effective this initial dose is, the longer the period between the two injections can be. 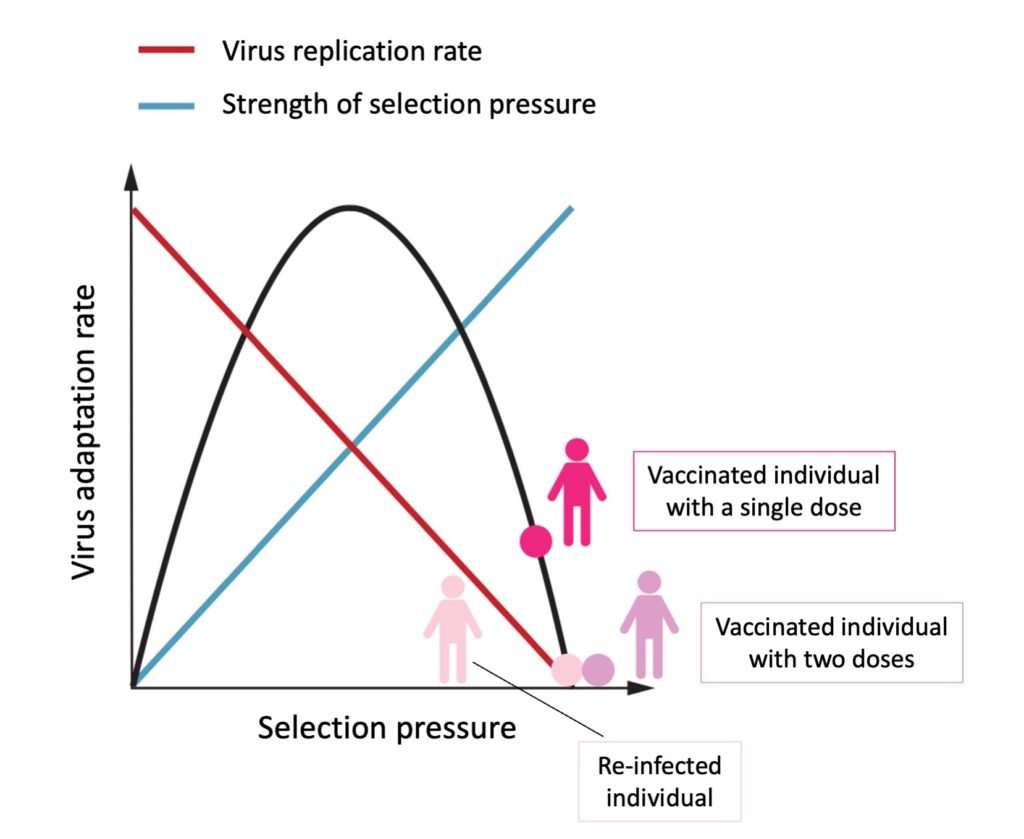