In certain countries, the deployment of safe and effective vaccines has enabled a reduction in numbers of cases, hospitalisations and deaths due to COVID-19. The possible need for a third dose, to compensate for a potential weakening of immunity or to increase protection against certain variants, has encouraged “vaccine nationalism”, that is, where countries stock-pile doses of vaccines to prioritise their citizens. However, other countries have limited access to vaccines. At the time of writing, the UK has given 137 doses per 100 inhabitants, whereas in Africa the level is 8,5.

The COVAX (COVID-19 Vaccines Global Access) political initiative brought together several countries with the aim of closing these gaps, but the method chosen for sharing out vaccine doses, based on the size of the population, has been the subject of debate. A fairer method of distribution is now being advocated (the “fair priority model”). It is imperative that we anticipate the effects of such disparities in order to better understand the virus’ transmission dynamics, so as to reduce it as best we can.

American and Canadian researchers (at Princetown and McGill Universities) have created a model to estimate medium and long term dynamics and evolution of the virus in two hypothetical regions, one with full access to vaccines and the other with limited access. (High and Low Access Regions, HAR & LAR). The main variable of the model is the number of doses provided by the HAR to the LAR. But the model also factors in the effectiveness and the duration of immunity (natural or vaccinal, after one or two doses) and therefore the proportion of people immunised, the frequency of the vaccination regime, the size of the population, the virus’ transmission efficiency, as well as the importation of new cases through immigration (the dynamic of the epidemic in a country is considered as both independent and non-independent). These variables give rise to a number of possible scenarios.

In the medium term, if the LAR country does not receive vaccine doses from the HAR, the number of infections would increase; how serious this is depends on the effectiveness of natural immunity. Since the number of cases would be higher in both countries, a favourable environment for the virus to evolve towards new variants, possibly having new properties, would be created, profoundly changing epidemiology in both countries. When borders are open, sustained transmission in the LAR country would tend to undermine control of the epidemic through vaccination in the HAR country: if the virus were highly transmissible or able to completely evade vaccinal immune responses, the number of cases would rise substantially in the HAR country. This latter would therefore need to invest massively in surveillance means (border controls, viral genome analyses…) to prevent new cases being imported, which would be very expensive. The clinical and epidemiological consequences would be multiplied in the long term in a scenario where immunity declines over time.

If the sharing of doses were adequate, then the number of cases would be considerably reduced in the two countries in the medium term. For the HAR country, it would no longer be necessary to invest in surveillance infrastructure. In addition, this scenario would greatly inhibit the evolution of the virus and its transmission dynamics. If the countries differed greatly in size of population or transmission rates, then the situation would be more complex, especially if vaccinal immunity were weak. Depending on the effectiveness of the vaccine and its availability, or on the virus’ transmission efficiency, then several other scenarios are possible, but with only minor differences. Here again, long term benefits are less clear if immunity falls over time.

In addition to ethical concerns, this work makes clear the need for consistent, fair and rapid deployment of vaccines in order for there to be better global control of the pandemic. The political decision to retain surplus stocks needs to be re-evaluated so that vaccine doses can be exported. This work underlines the importance of continuing to assess the robustness of vaccine immunity over time as this variable significantly influences the overall burden of the pandemic. 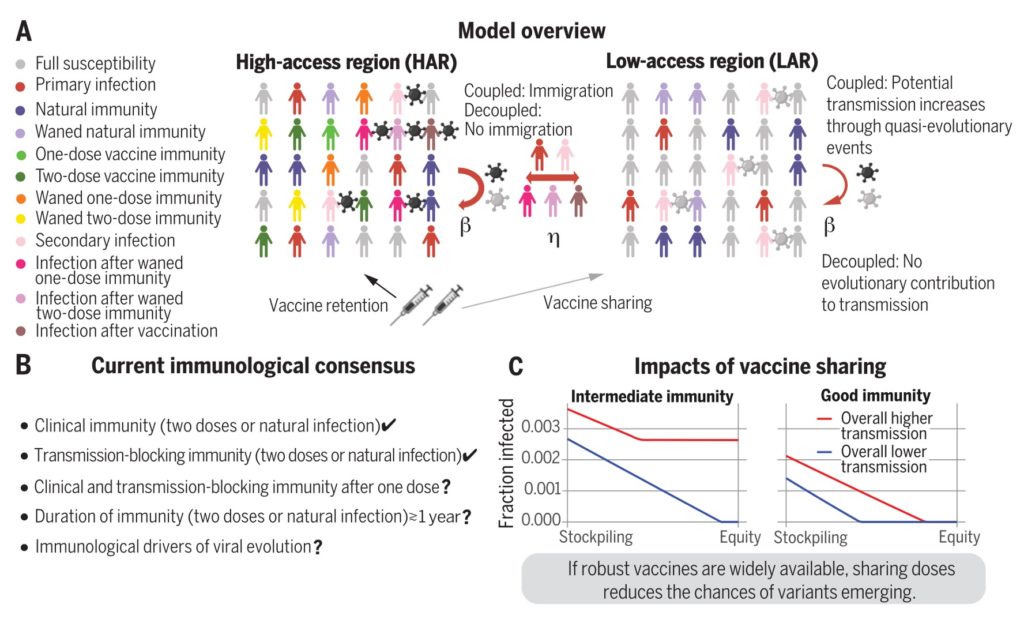