Use of the extracorporeal circulation technique

Hospital treatment of COVID-19 has changed significantly over the course of the pandemic. ECMO (Extracorporeal Membrane Oxygenation) is a form of cardio-respiratory support, also called extracorporeal circulation, which is proving beneficial. The system uses a machine that temporarily replaces the heart and the lungs in the blood circulation and oxygenation. Blood circulation is thereby diverted through a mobile device situated at the patient’s bedside

Use of ECMO for serious cases of COVID-19 was initially avoided due to its extremely high mortality rates. But doctors have now returned to it. Researchers at the University of Michigan and the Pitié-Salpêtrière hospital have analysed the results of this technique in COVID-19 cases.

The researchers carried out a retrospective study using data from 349 centres in 41 countries, and calculated the number of deaths 90 days after ECMO was utilised. 236 centres started using the technique early (before May 2020) while 113 centres started later. Patients were categorised in 3 groups:

It should also be noted that the length of treatment of patients by ECMO increased as the pandemic evolved: 14 days on average in group A1, 20 days in group A2.

The scientists also noted that centres that used ECMO early had a lower rate of mortality compared to centres that began later.

In conclusion, mortality after use of ECMO for COVID-19 patients increased as the pandemic went on. Doctors probably enlarged categories of patients to receive the treatment to include those who had less chance of survival. Early-use centres transferred 18% of patients treated before the 1st of May 2020 to other hospitals, and only 11% of those treated after the 1st of May. However, the study did show that the level of experience in ECMO treatment in centres was important and enabled rates of mortality to be lowered. 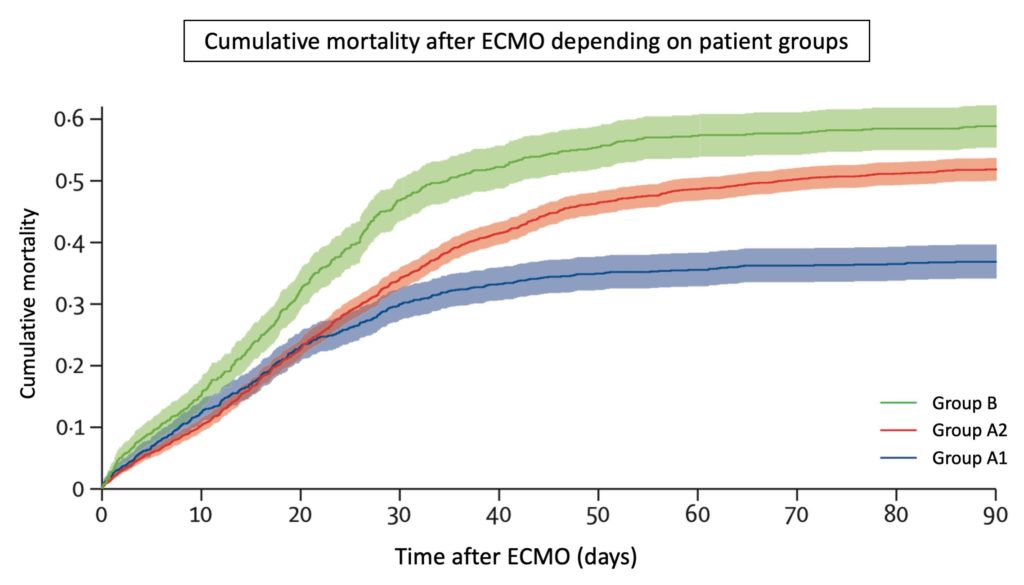