The viral genome (of the RNA in the case of SARS-CoV-2) is made up of about 30,000 nucleobases of 4 types, repeated to form a code. To read it, use must be made of a ribosome, that is, a large protein that moves along the RNA. In the case of infection, the cell’s ribosomes are recruited by the virus to produce its proteins, using its genome as a matrix or plan. The nucleobases of the viral genome are read by the ribosome in groups of 3 and correspond to a specific amino acid that we call the reading frame. It is this sequence of amino acids that forms the protein.

In the case of SARS-CoV-2, a particular event takes place during protein production: a dislocation in the reading frame. At a certain moment, the ribosome will go back a base, before resuming its reading of 3 bases at a time. Swiss and Irish researchers (at the ETH in Zurich, the University of Berne and University College, Cork) have studied the structure of the viral RNA and the cellular ribosome to explain this shift in the reading frame, essential to the production of SARS-CoV-2 proteins.

The researchers carried out electron cryo-microscopy analyses, a technique which allows the very precise study of protein structure. Microscopic observation took place at different stages of the ribosome’s reading of the RNA of SARS-CoV-2. They firstly noted the formation of a structure within the viral RNA that resembled a knot and created an obstacle at the entry tunnel of the ribosome. Since the ribosome is a protein that moves along the length of the RNA in order to decode it, this obstacle engenders tension within the viral RNA in the ribosome, which then pauses in its reading before moving back one base. Reading of the RNA by the ribosome then resumes to allow protein production.

The particularity of the viral RNA that causes this shift may well be a target for future medicines, where the aim would be to prevent the shift in the reading frame and thereby block the manufacture of viral proteins. 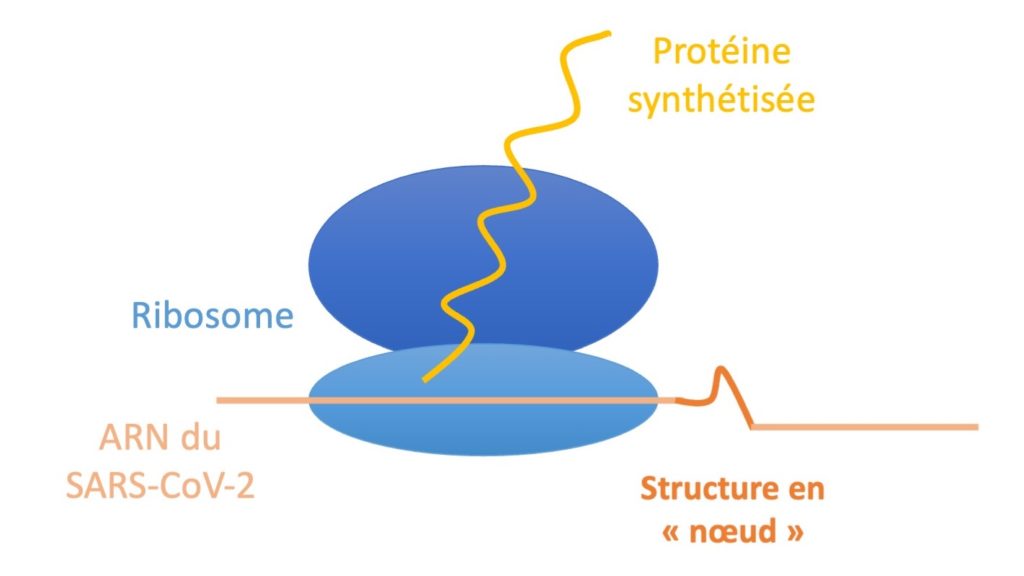 Pramod R. Bhatt and coll. Structural basis of ribosomal frameshifting during translation of the SARS-CoV-2 RNA genome. Science 13 May 2021.