More transmissible variants of SARS-CoV-2 have emerged from the original Wuhan strain. Amongst these, the UK variant, discovered in Great Britain in the 3rd quarter of 2020, quickly became the dominant strain in the country. This variant carries a number of mutations, notably within the spike (S) protein, such as for example the N501Y mutation and the deletion, or loss, of 2 amino acids in position 69-70. Researchers in California have studied the prevalence of this variant and its behaviour in spreading across the United States. It may have arrived in the country in the autumn of 2020 and have spread over more than 40 states by February 2021.

The researchers first of all estimated the numbers of the UK variant through positive PCR tests and verified their data by sequencing some of these PCR tests. Results from these tests enabled the number of mutants to be estimated: the position 69-70 deletion effectively renders the target S protein (one of 3 targets detected by the test) undetectable.

The UK variant represented 1.4% of positive PCR cases at the beginning of October 2020 and this figure increased regularly over the following weeks. The rate of progression of this variant is on average 7.5% per day countrywide, but there is a disparity between states that can be explained by differences in sanitary precautions as well as variable population densities.

Using phylogenetic analyses, the scientists were able to observe that the variant had arrived independently in various parts of the country between November 2020 and January 2021. According to their calculations, it became the majority variant on the 19th of March 2021. The researchers also estimated that the variant is 41% more transmissible that the original strain.

The spread of the UK variant of SARS-CoV-2 across the United States has therefore followed the same course as in other countries where it has become dominant. Given that it has heightened transmissibility, its spread threatens dire consequences for mortality rates in the country over the coming months without appropriate preventative sanitary measures, 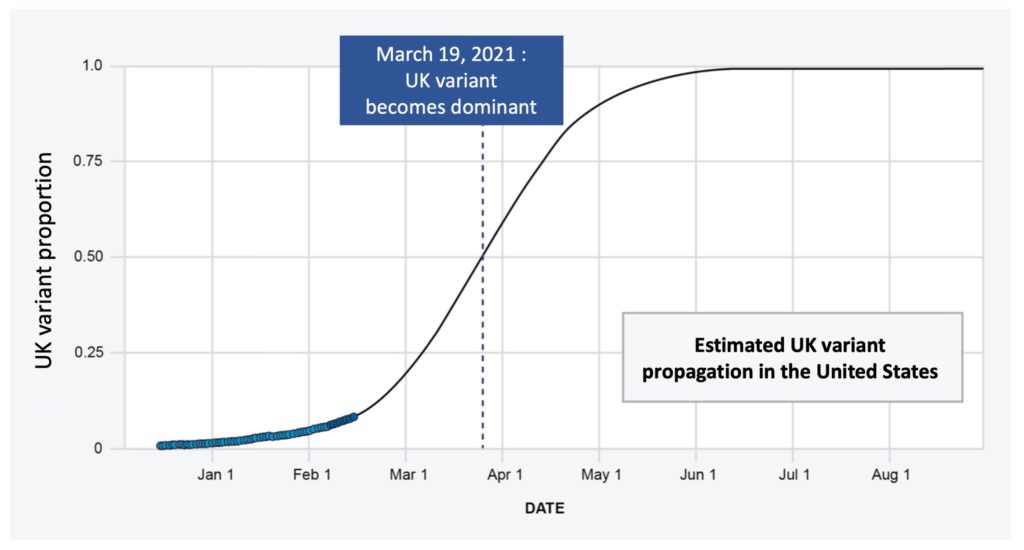 Nicole L. Washington and coll. Emergence and rapid transmission of SARS-CoV-2 B.1.1.7 in the United States. Cell, Available online 30 March 2021.