The paradox of COVID-19 in India

At the beginning of February 2021, the number of cases of COVID-19 in India fell below 10 000 per day. Politicians reacted by removing public health restrictions and allowing mass gatherings, while people in general began wearing masks less and less. Some Indian scientists believed that herd immunity had been attained and that the worst of the epidemic was over. At that point, though millions of people had been infected by SARS-CoV-2, the country seemed to have recorded substantially fewer deaths compared to other countries. Hypotheses were put forward to explain this paradox: for example, environmental factors (such as high rates of vitamin D in the population) or the high percentage of vegetarians in the country.

But only a few weeks later, on April 25th 2021, India set a new world record for cases, with 350 000 in one day. Hospitals were overwhelmed. Why did this sudden increase in the number of cases take place? Can we still speak of the paradox of low Indian mortality rates? 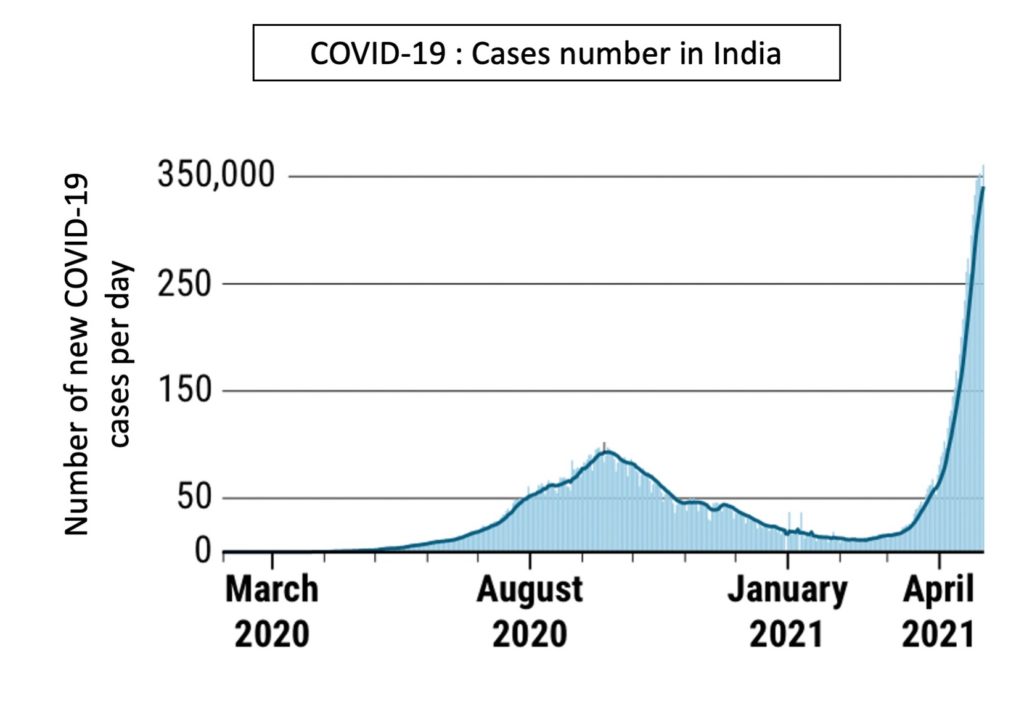 Despite certain studies carried out at the beginning of 2021, which showed that 50% of the population of large Indian cities had immunity, it seems that these results were not representative of the population as a whole. The rapid and sudden increase in the number of cases, from March 2021 onwards, appears to have been due to several factors. Firstly, there was the appearance of an Indian variant that seemed to be more infectious. It has 2 mutations in the spike protein, L452R and E484Q, that give it higher infectivity and, potentially, the ability to evade immune responses. In addition, the rate of vaccination in the country is low. And finally, public health measures that had been put in place in 2020, had been largely relaxed before the beginning of this wave of the epidemic.

Reliable epidemiological data is difficult to obtain in India: a large percentage of infected people are asymptomatic, and the majority of the population does not have access to testing. In addition, cause of death is noted on only 20% of death certificates. Several studies have analysed data from the most densely populated cities in the country. The rate of mortality has been calculated as 41 deaths per 100 000 inhabitants, substantially less than the rate of 91 deaths observed in the US. 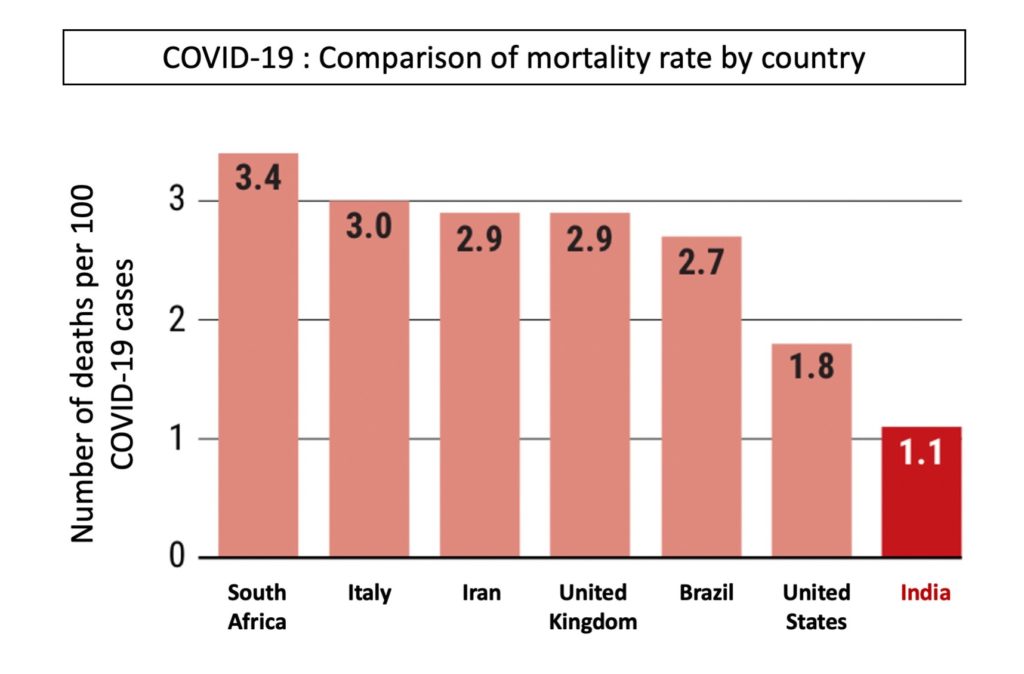 This difference may be explained by the fact that the population is very young: 45% of Indians are younger than 19, and only 4% are older than 65. Since the risk of death from COVID-19 is primarily linked to age, if a large majority of the population is very young, then the overall rate of mortality will be less when compared to countries with a relatively older population. Researchers also believe that genetic and environmental factors may partially explain these low mortality rates.

The Indian variant of SARS-CoV-2 therefore needs to be monitored very closely, since it seems to be one of the factors in this very rapid increase in the number of cases in the country. Until recently, India seemed to have lower mortality rates than other countries, linked to its very young population. The Indian paradox may need to be revised in the light of the wave of infection that the country has faced in recent weeks, since serious cases of COVID-19 appear to be affecting more healthy young people. It will be necessary therefore to wait for the end of this wave of the epidemic and for more reliable epidemiological data to emerge to be able to confirm or discredit the initial hypothesis.