Unlike other mRNA vaccines, the CVnCoV developed by CureVac does not use pseudouridine or nucleoside modification. The mRNA of the SARS-CoV-2 spike, which enables viral entry and is the main target of neutralising antibodies, is encapsulated in lipid nanoparticles in its stabilized pre-fusion form. Its efficacy has been evaluated in the HERALD (phase 2b/3) clinical test, which includes several variants, and the vaccine proved to be 48% effective against symptomatic cases of COVID-19. CureVac has also developed CV2CoV, identical to CVnCoV, but carrying modifications in the non-coding regions that surround the mRNA of the spike, which enable a better expression of the protein in vitro.

German CureVac researchers (Tübingen) worked with American researchers from Harvard University (Boston) and the Ragon Institute (Cambridge) to evaluate CV2CoV in vivo. Cynomolgus macaques were vaccinated so as to compare its immunogenic capacities and its protective effectiveness to that of CVnCoV. 2 doses were given at an interval of 4 weeks and no side-effects were observed. CV2CoV brings about a stronger immune response than CVnCoV: levels of inflammatory cytokines in the blood are higher, as are the T and B memory cell responses. CV2CoV also produces 20 times more neutralising antibodies specific to the original strain than CVnCoV, at levels comparable to that of the Pfizer vaccine. Levels of neutralising antibodies specific to the D614G, Alpha, Beta, Lambda, Kappa and Delta variants were 10 times higher.

Two days after inoculation by the original strain, levels of sub-genomic mRNA, which reflect the quantity of active viruses present in the upper and lower respiratory passages (bronchoalveolar fluids) of vaccinated animals, were respectively 1 000 and 10 000 times inferior to those of the placebo group. With CVnCoV, the reduction is more modest. The level of protection is thus linked to the levels of neutralising antibodies produced by the vaccines. Ten days later, autopsies were carried out on the animals, and there was less lung damage with the 2 vaccines, although no significant difference.

CV2CoV therefore induces a better humoral and cellular response than CVnCoV in macaques, but also confers better protection against the original virus. The optimisation of non-coding regions may therefore substantially improve protection effectiveness of mRNA vaccines, without modification of nucleosides.

This vaccine is therefore very promising, but its protection against different variants remains to be tested, along with the duration of immunisation. Clinical tests of CV2CoV are currently being planned. 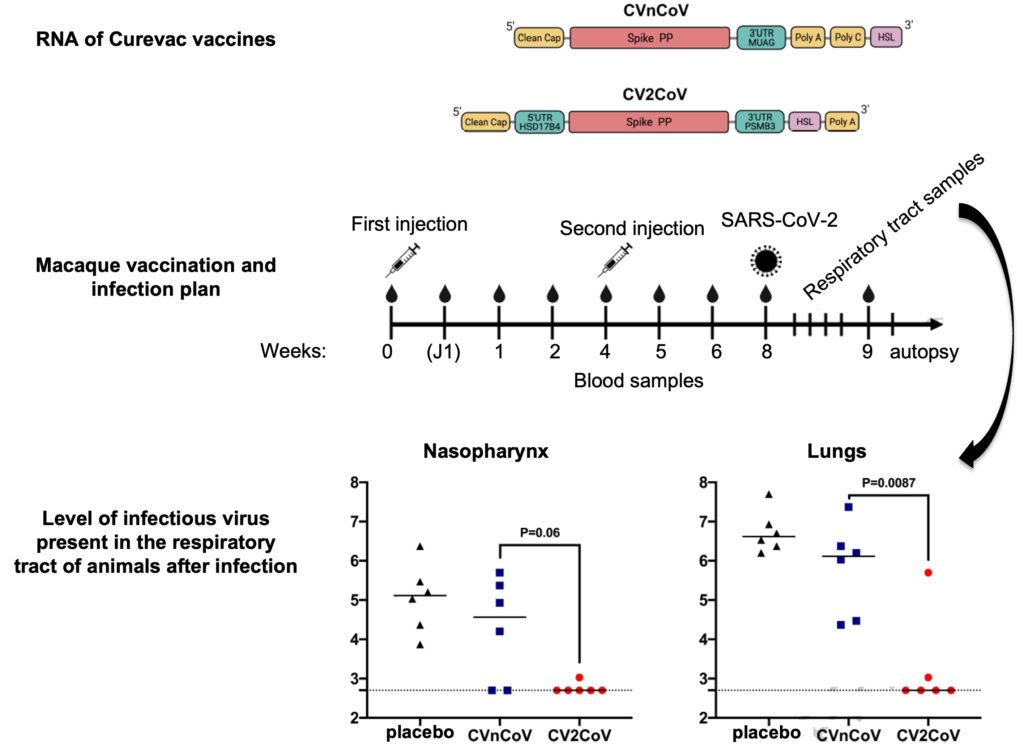