The most powerful antibody

A recent study attempted to identify the most effective antibodies in order to meet needs for urgent treatment options in the face of the proliferation of variants.

As well as the human cost of the COVID-19 crisis (more than 2 million lives lost) the economic impact has been considerable. According to one estimation, it may have cost the American economy 16 trillion dollars. There is clearly an urgent and necessary need to find safe, effective treatment against COVID-19.

Vaccines are one response against the crisis and several are already on the market. However, the recent appearance of SARS-CoV-2 variants may strongly impact on their effectiveness. These variants (UK, South African, Brazilian and Japanese) are numerous and make the development of therapies urgent.

Human monoclonal antibodies (mAbs) are one interesting option, since they can be more quickly developed in general than other medicines or vaccines. More than 50 mAbs are already commercialized, and therefore categorized as safe, for treating certain cancers or inflammatory and auto-immune diseases. Since the beginning of the pandemic, different mAbs have been developed against SARS-CoV-2, in general isolated using the serum of patients who have recovered from infection. Some of them are undergoing phase 2 or 3 clinical testing and have even been authorized for commercialization by the FDA (the American health authority). All of these mAbs neutralize SARS-CoV-2  infection by binding with the virus’ spike (S) surface protein.

In order for them to be effective, they have to be administered in high doses, which is very expensive. To reduce costs, it is therefore important to develop extremely powerful antibodies that can be used in smaller quantities. In addition, these antibodies may actually facilitate infection by increasing entry of viral particles into the cells: this outcome has already been seen during treatment of the dengue virus, for example.

The aim of a recent study was to isolate an extremely powerful antibody derived from serum from patients cured of COVID-19.

To achieve this, the Italian researchers isolated B-memory lymphocytes from 14 patients infected with SARS-CoV-2 in order to identify 1731 mAbs specific to the S protein of the virus (10% of total B lymphocytes). They analyzed all these antibodies in vitro and the majority had low potential for neutralization. Around 1% had significant neutralization potential, but only 3 antibodies appeared to be powerful enough so as to be able to be used in low doses. The researchers optimized these 3 antibodies using genetic engineering so as to increase their life span and avoid the risk of them facilitating infection. For this, 5 mutations were introduced into the genes coding for these antibodies.

These modified antibodies were then tested to confirm their specific binding to the SARS-CoV-2 S-protein and their neutralization potential in relation to the original strain of SARS-CoV-2, but also variants of the virus. One of these 3 antibodies showed very high neutralization potential, in particular in relation to the original strain, but also against the UK variant, and the variants with the E484K mutation (South African and Brazilian). The prophylactic and therapeutic effects of these antibodies were tested and results were confirmed by intra-nasal injection into hamsters, infection models for COVID-19, before or after SARS-COV-2 infection. 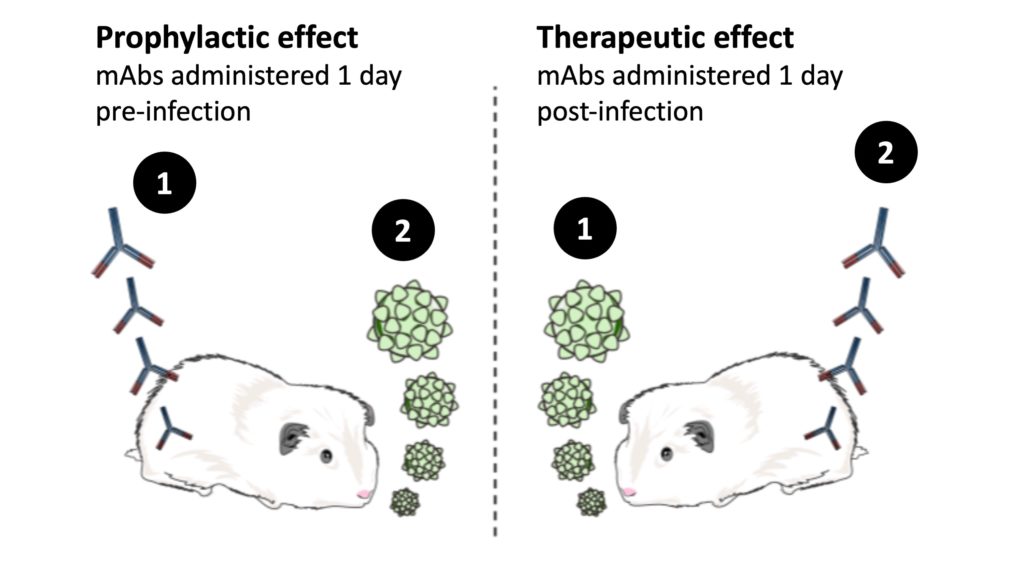 In conclusion, this study enabled the discovery and improvement of an mAb which had powerful neutralizing capacities against the S protein of SARS-CoV-2. This antibody appears to have good prophylactic and therapeutic effectiveness against the original virus, but also against the UK, South African and Brazilian variants. However, testing was only carried out on a model organism, the hamster, and needs to be confirmed on humans.